Road to 2020: Draft Prospects Raising Their Stock in October

The battle for #1, rising talent in Germany and more storylines are covered in this month’s draft journal.

Share All sharing options for: Road to 2020: Draft Prospects Raising Their Stock in October

The 2020 NHL Entry Draft is shaping up to be the most important draft for the Ottawa Senators in a long time. The rebuild is in full force, and the team is expected to have at least one lottery pick (we see you, San Jose). Shipping off star players via trade has gathered the Sens a slew of valuable picks, and it will be up to Pierre Dorion and his scouting staff to shape this team’s core for the next decade-plus.

To the team’s fortune, the draft class in 2020 could be one of the strongest classes in the NHL’s modern era. The top is stacked with elite players, and the depth just trickles down from there.

Today we’re kicking off the Road to 2020: a monthly column where we’ll highlight important storylines from the past month about prospects in the 2020 draft, from battles at the top to rising talents.

This series will be focusing on emerging trends rather than profiling player styles — we’ve already covered a handful of prospects earlier this season, plus we’ll be doing more player analysis as the draft gets closer. If you’re curious about learning the details of each player, I recommend visiting sites like Dobber Prospects, DraftGeek, Future Scope Hockey, HockeyProspect.com and The Prospect Network that all do fantastic work. I’m not a scout, these people are.

I’ll be frequently referring to expected range (or xRange) throughout the series, a stat that attempts to quantify the consensus opinion of where we might expect a player to be picked. It’s based on the aggregation of several public rankings — think of it as the public consensus. You can find the xRange for every prospect here, and an explanation of the calculations here.

Without further delay, let’s begin with the two outlandish players battling for the crown of first overall.

The two players at the top of the draft have been nothing but phenomenal in the first month of the season, with each already carving their names as future NHL superstars. Either could go first overall in June, with left-winger Alexis Lafrenière (xRange: 1-1) currently edging out centre Quinton Byfield (xRange: 1-4).

You can debate in the comments who you’d prefer for Ottawa given their need for a first-line centre, but it’d be tough to be unhappy with either player. Lafrenière, who won the CHL MVP award last season as a 16/17-year-old, is already leading the QMJHL in scoring by a mile with 39 points in 16 games (2.44 points per game). The next two players on the leaderboard are his linemates, who are both on pace to shatter their previous career highs.

Glancing at the OHL, Byfield is also leading the entire league in scoring with 31 points in 16 games (1.94 P/GP). Looking at the best draft-year performances to come out of the OHL in the last decade, Byfield’s P/GP trails only two players: Connor McDavid and Mitch Marner. That places him above John Tavares, Taylor Hall, Tyler Seguin, Nail Yakupov, Matthew Tkachuk, Alex DeBrincat and Andrei Svechnikov, among many many others. Keep in mind that he’s also a very young player for this draft class, and his surrounding team is pretty weak. It’s astonishing what he’s been able to accomplish so far.

The gap between Lafrenière and Byfield for #1 appears to be a tight one, which for a tanking team is “hook-this-into-my-veins”-level entertainment. These two at the top are a major reason why this draft is so special.

Byfield leads the OHL, Lafrenière leads the QMJHL, and believe it or not, the scoring leader in the WHL is also a first-time draft-eligible player in Connor Zary (xRange: 15-31). His 21 points in 14 games is higher than anyone else, also leading the league with 70 shots on goal.

Zary’s currently pegged as a mid-first-round talent, but he has the potential to rise even further with his current performance. It’s worth keeping in mind that he’s one of the oldest players in the draft (born ten days after the 2019 cutoff). But his draft-minus-one year was also fantastic, with a point-per-game season that would’ve merited a top pick in the 2019 draft. He’s a fantastic playmaker who’s already setting himself apart as a real difference-maker.

The last time a first-time draft-eligible CHL player led their respective league in scoring was Dylan Strome in 2014-15 (OHL). Before that it was Taylor Hall & Tyler Seguin when they tied for the OHL title in 2009-10. The fact that all three CHL leagues could be fronted by 2020 draftees just speaks to how uniquely talented this draft class is.

Not everything can be positive, unfortunately, as a couple of players saw their stock drop this past month. Most notably is Dylan Peterson (xRange: 16-72), who at the beginning of the season was frequently ranked in the top 20. The tall centre with an Ottawa connection has six points in 17 games between the USHL and USDP — for comparison, fourteen 2019 draftees scored at least a point-per-game in the USHL last season.

Tyler Kleven (xRange: 21-72) is also becoming one of this draft’s most divisive prospects between the old-school and new-school. He’s a hulking 6’4” defenceman, although he too is struggling on the same team as Peterson, with four points in 15 games between the USHL and USDP. Overall this draft class is a pretty weak year for the USHL, especially compared to their historically outstanding crop of 2019.

Over in the QMJHL, a pair of top 2020-eligible players have gone down due to injuries (Lafrenière is not one of them, thankfully). Hendrix Lapierre (xRange: 8-15) suffered a concussion a week ago, with no timeline yet for his return. He missed time due to a concussion last season too, although he was off to a great opening month with 13 points in as many games. Defenceman Lukas Cormier (xRange: 21-41) is also currently sidelined after his hot start of 15 points in 13 games, out for the next month with a lower-body injury.

Based on the month-to-month tracking of expected range, there’s one thing in common with the three biggest risers: they’re all from Germany.

The 2020 draft could be monumental for the country’s hockey culture, as their crop of talent this year is unlike anything Germany has previously produced (with maybe the exception of Leon Draisaitl, although he was the only German drafted in 2014).

The three players I’m referring to are forwards Tim Stützle (xRange: 7-14), John-Jason Peterka (xRange: 30-78) and Lukas Reichel (xRange: 41-89). What’s unique about this trio is that they’re all playing in the DEL, Germany’s top pro league, which is unprecedented territory considering many top German prospects generally transfer to the CHL. It’s not the strongest league in Europe, but it’s not a weak league by any means either and they’re still playing against professional competition.

Rising to the challenge, all three are producing at a high level. Stützle has been impossible to ignore with 15 points in 15 games, which again, is in totally unprecedented territory for a player his age. No draft-eligible prospect has had a point-per-game season in any of Europe’s major pro leagues (KHL, SHL, Liiga, NLA, DEL) since the 1960s (except for Auston Matthews, but he doesn’t count). Needless to say, Stützle is making waves as a possible top-ten, or maybe even top-five pick.

Peterka and Reichel aren’t all that far behind either, as Peterka has six points in 15 games while Reichel has nine points in 14 games. Reichel in particular is seeing major gains on draft boards, as he was only on one source’s radar a month ago.

Every year there seems to be a small handful of players who burst onto the scene out of nowhere. Here’s a few candidates I have my eyes on after the first month:

The 2020 draft class has admittedly turned into a bit of a personal obsession. Fortunately for you, that means more content!

My database of draft rankings continues to grow, with the consolidated rankings already incorporating 47 trustworthy sources. You can find the expected range of all 281 currently ranked players on this public spreadsheet. Every player name links to their EliteProspects profile if you’re interested in digging further, and you can find a list of every source under the ‘Source’ tab, or by clicking here.

For a visualization of the month-to-month data, there are interactive charts you can access here (player value) and here (expected range).

If mock drafts are more your fancy, I’ve also created a mock draft tool which you can download for yourself to play around with potential scenarios. It can be found under the ‘Draft Board’ and ‘Watch List’ tabs of the spreadsheet, or by clicking here.

Go wild, and feel free to share your mocks, whether it be in the comments here, on Twitter (you can tag me @CudmoreColin), or elsewhere. The tool will be especially useful on draft day, but until then I’ll be frequently updating the standings and randomly-generated mock draft. 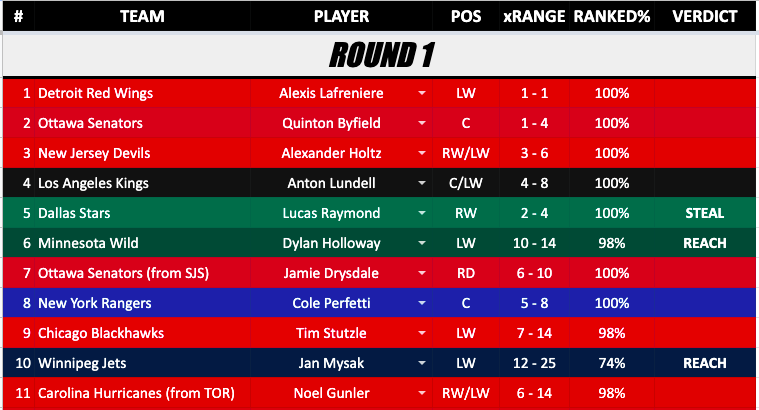 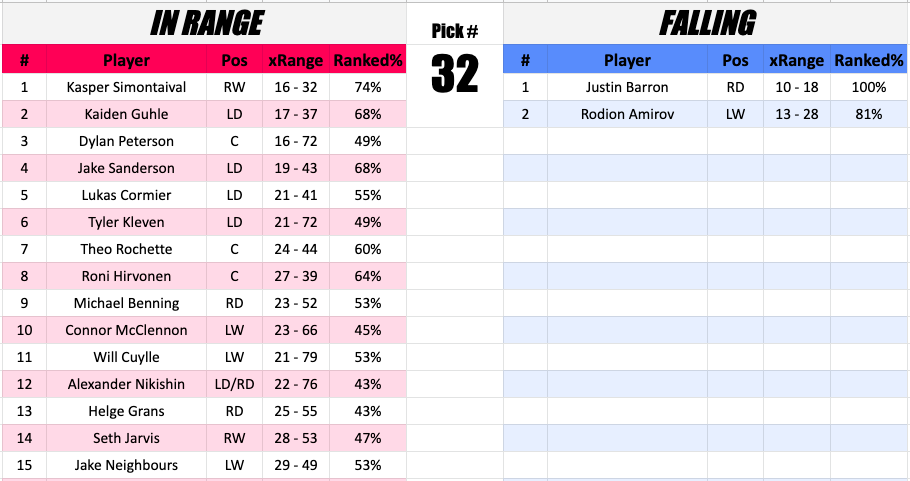 Draft day is eight months away, but it’s never too early to get excited! I sure am, and I look forward to continue this series right up until June 26th.