Who did you expect?

Erik Karlsson is the best player on the Ottawa Senators roster. He's the best player in the modern-day history of the organization, and the best defenceman in the NHL. Of course he'll sit atop the list of Ottawa's best young players.

What were you expecting? Suggesting any other name would be downright crazy.

Last year Karlsson put up a historic season. He deserved and was awarded the Norris Trophy for his efforts. It wasn't clear before last year, but as the year went on it became increasingly clear that the future of this team lies squarely on the shoulders of its top defenceman, and he will lead the way on the offensive and defensive side of the puck. More than any other player on the team or in the system, he's capable of single-handedly breaking a game wide open. 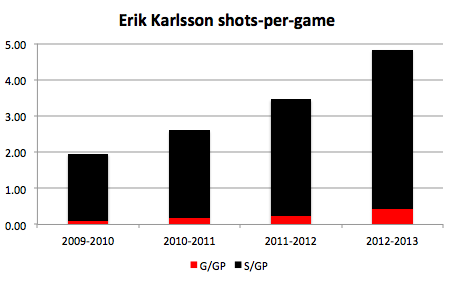 And if you weren't convinced of Karlsson's importance before this week, the fallout of his unfortunate (and cringe-worthy) collision with Matt Cooke on Wednesday night has or will certainly prove it. 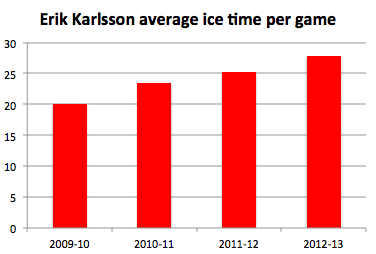 But although the injury looked awful and will keep Karlsson out of the lineup for this season, the good news is that it's not the type of injury that typically affects a player's long-term performance. That's good news for the Karlsson and even better news for the Senators and their fans, because he's the most significant cornerstone of the organization now and for the future.

Last season, Karlsson surprised everyone with his ridiculously incredible season. Few thought he could repeat the feat, let alone improve, but he came into this season even more dominant than he was last season. It seems likely that he will still win the SM-liiga defencemen scoring title, and he was poised to at least compete for the NHL one. Winning defensive scoring titles in two pro leagues in the same season sounds absurd, but Karlsson could have done it. He was a commanding presence on the ice for the Senators this season and the "one-man breakout" worked wonders for the team.

I could go on, but I don't think I need to. His play speaks for itself. He tops our list. I can't wait until he's back.