Kyle Turris joined the team just over a year ago and jumped right to the number two spot on our T25U25 rankings. This season, with Jason Spezza out of the lineup, we'll get a good idea of whether Turris is a pretty good depth centre or a potential top-line pivot.

Everyone in Ottawa knows how important Kyle Turris is to the future of the Senators organization, and anyone who wasn't sure before the summer can look at his five-year contract extension as proof positive.

However, along with that contract extension comes something else: Increased pressure. The honeymoon period with our newest top young player won't last forever, and fans and management alike are now looking to Turris to provide consistent and timely production as the catalyst for secondary scoring on the Senators. Jason Spezza's injury has accelerated the development timeline, and now Turris is under more scrutiny from fans and opposition alike.

But before getting too far into that, we should take a step back and look at where Turris has grown during and since last season. Setting aside his short stint with Phoenix prior to the trade, Turris had a very good season last year, notching 29P (12G, 17A) in 49GP with the Sens, plus another three playoff points (including his spectacular overtime winner in Game Four) in seven post-season games. That regular-season rate projects to just over 48P in a full 82-game season, which is good for a second-line centre, and probably very good for Turris considering the circumstances under which he joined the Senators: No training camp, a new coach, a new system, and a new lease on life. I'll try to avoid being too unrealistic, but 40-50 points in a (full) season should probably serve as a good baseline for Turris; we can hopefully expect him to at least match that production rate reliably for the foreseeable future.

This season's been a bit strange, too, with Turris playing in Finland for a couple of months during the lockout, but he's started exceptionally well with 11P (4G, 7A) in 13GP. Reportedly, his summer was jam-packed with serious physical training, and Turris looks like a powerful skater and puck-carrier this season, and that's reflected in his point totals so far (even if the sample size is too small for us to draw too many conclusions). 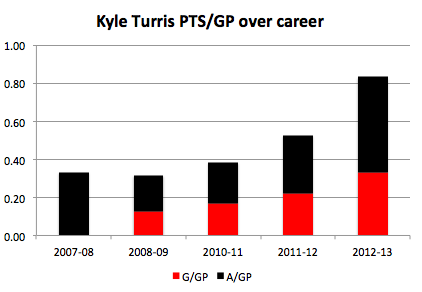 But it hasn't all been rosy for Turris and the Senators. Since Spezza's injury, the team has seriously struggled to put up consistent offence. Or offence at all, with just seven goals and a 2-3-1 record since it was announced Spezza would go under the knife. That can't all fall on the shoulders of Turris (especially since he's still got four points [all assists] in those six games), but there's no denying that the Senators need more from Turris if they're going to find a way to off-set the loss of Jason Spezza. That might come with more shots, as Turris has only seven shots in his last six games. He's still a very young player and has months to get more comfortable in this new position on the depth chart, granted, but based on the few games we've seen so far Turris has looked (to me, at least) more like a complementary second-line centreman who's pretty good at most things but not exceptionally good at many of them.

Second-line centremen are nothing to scoff at, though, and every Sens fan will tell you how important they are to a team's success. If Kyle Turris ends up developing into a good to very good second-line centre, then he will be a very important part of the picture for the Senators, especially considering his ability to balance offensive production with defensive responsibility.

And if Turris' development can continue in the next few years and he becomes more than that, all the better. He does look like he has the tools to become far more than a 40-50-point scorer in this league (good size, great speed, a sneaky shot, and a keen eye for developing plays), but the question remains whether or not he can develop those assets further and put them all together coherently. If he is able to, the Sens will feature an embarrassment of riches up the middle that may truly be, as Eugene Melnyk might say, the envy of the whole NHL.