A slightly unsung player kicks off our latest look at Ottawa's future.

Even though not much happened this offseason, we felt it was time again to look at the players Ottawa had in their pipeline. There weren't many changes at the top of our rankings, but there's still been some significant upheaval compared with our Winter 2013 list, which just goes to illustrate how competitive the NHL really is. A young player might be the apple of our eyes one season only to get leapfrogged by some new hotness just a few months later.

And no, don't worry--there's no Nikita Filatov prank article coming this time around. That joke only works once. Filatov didn't receive any votes among our staff last time around, and we didn't even bother to include him on the voting list for this round. Now... on with the show!

Dave Dziurzynski starts off our list based primarily on a pretty eventful little stretch of 12 games with the Senators this year in between a reasonably pleasing showing (20 P - 4G, 16A, 110 PIM in 54 games) with the Binghamton Senators.

Of course, Senators fans remember how his stint with the big club ended--getting knocked out by professional heavyweight Frazer McLaren--but they may not remember how it started: In just his third NHL game, Dziurzynski scored his first NHL goal. Playing on a line with Z, Smith and Chris Neil, it's fair to say that offense was not what Senators fans were expecting from the youngster, and to get it so quickly was a pleasant surprise. More importantly, it was a meaningful goal, padding a one-goal lead with less than three minutes remaining in the game. Dziurzynski showed a willingness to shoot the puck and go to the net in addition to playing a physical game, which meant that head coach Paul MacLean had incentive to keep playing him.

Just three games later, Dziurzynski would score again, this time beating Montreal Canadiens goalie Carey Price. That goal was not nearly as pretty, as it should have been a routine save for an NHL goaltender, but whatever the reason, it went in, and there's no stat for how or why goals are scored. Nevertheless, Dziurzynski's scoring pace, extrapolated over an 82-game season, would have put him around 14 goals. That's not bad at all for a third line player.

And that may be where his ceiling tops out at. He's certainly not a fleet-footed skater or gifted goal-scorer, or dazzling offensive wizard. He's simply a big guy who does his job and who isn't afraid to get physical. Let's face it--there's nothing wrong with that. Teams will always need those players.

From a statistical standpoint, Dziurzynski's time in Binghamton appears to show a player who is growing more comfortable in his role. His point production has increased (it dipped slightly this year, likely due to his NHL interlude) as has his penalty minutes. 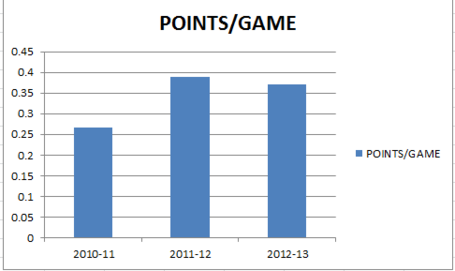 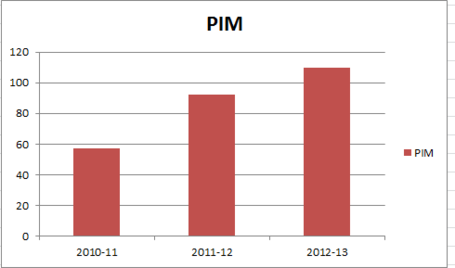 The Senators organization has treated Dziurzynski with class, letting him play two more games after recovering from his concussion before returning him to the NHL, and signing him to a one-year, two-way deal that will pay him $75/640K, which represents a raise of almost $20K from his last AHL deal. It's clear the organization values his ability to be a role player, but aren't yet willing to commit to a long-term investment without him showing more.

That means this is a crucial year for Dziurzynski within the organization. Best case is that he shows himself capable of playing in the NHL full time and earns a one-way deal, and worst case is that he doesn't do anything to separate himself from a crowded group of young forwards fighting for limited roster spots and does not receive a new contract offer.

Either way, Dziurzynski makes our list for the flash of potential he showed this past season. Whether he builds on it this year remains to be seen.