Last week, the Ottawa Senators made an open call to nominate Sens Twitter users to their 2022-23 Season Start-up event. I was one of the lucky five to get the call.

*ahem*
#Sens Twitter, you are cordially invited to our 2022-23 Season Start-Up event, but there’s a catch: we only have limited seats available!

Tell us who you want reporting from it and we will get them in!

First off, I want to say it was an honour getting the invite, from getting enough nomination from my followers on Twitter, but also for the Sens opening up this media event for some Sens blogger/social media types. Also in attendance were @SensChirp, @sleepenbaker, @OToole_19, and @LalimesMartian.

The event started off with an introduction from Sens President of Business Operations, Anthony LeBlanc. 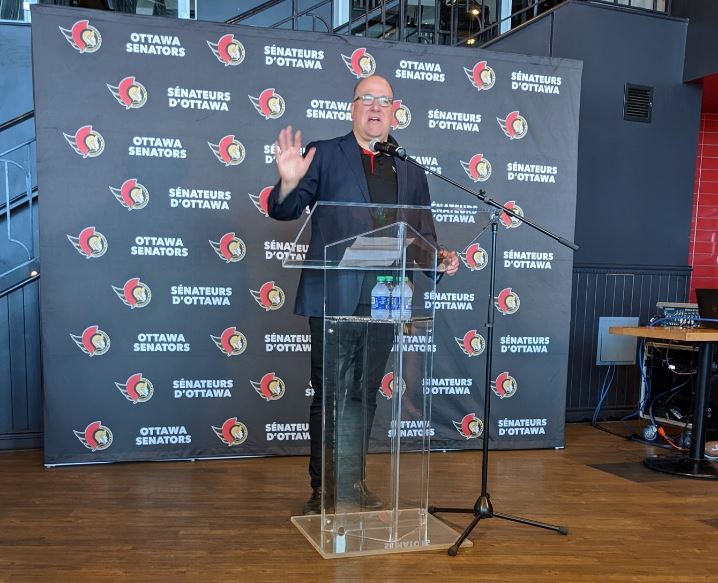 He started off with a joke about how he's lasted way longer than anyone expected him to (referencing the revolving door of executives the Sens have had in the past). He made sure to thank Pierre Dorion, who's off-season has made his job significantly easier. "We will be playing meaningful games into the Spring", and added that he can't remember a time in the last 30 years where there's been this much excitement and optimism. Season ticket holders are up 60% from 2019. LeBlanc also made sure to highlight that a large number of corporate sponsors have returned in the last six months. He expects to see a larger number of sellouts compared to the past five years.

From a new arena standpoint, the team is still doing their due diligence, and expects that to take another year as they hammer out any details. He did reveal that they're aiming for around a 16,500 capacity, smaller than the CTC today, making note that suites (which the CTC has many) are no longer as popular as they once were. The team is actively searching for a new executive for their charity foundation, and expect to formally re-launch it this season. Chris Phillips and Chris Neil have also been officially brought back into the fold. Phillips is now VP of business operations, with Neil getting VP of business and community development. We also got confirmation that Fan Fest is finally returning this month on September 25th!

We then jumped to marketing updates. 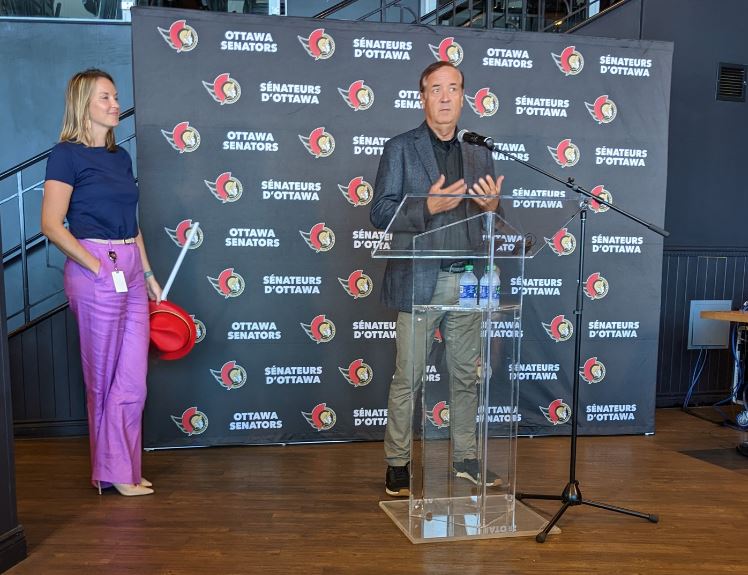 There was a lot on this front. The team has decided to stick with "Go Sens Go" as their tag line. Don't break what isn't broken! We also got the first look at the 30th anniversary logo, which makes use of the Parliament flag. 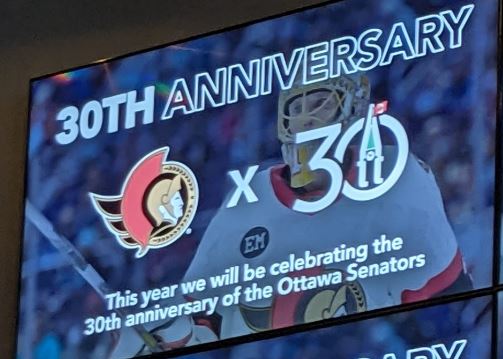 We we provided a sneak peek at the new commercial the Sens will be running to start the season.

We then got a list of the theme nights the team will be having this season. There's something for everyone! 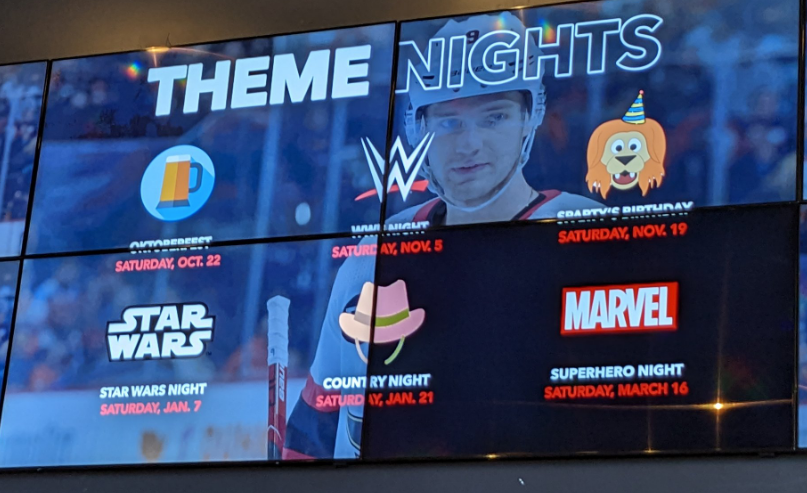 Some of these nights will coincide with giveaways, with a couple previewed here. They made sure to note that some of these will be part of ticket deals and not your typical giveaway at the game. 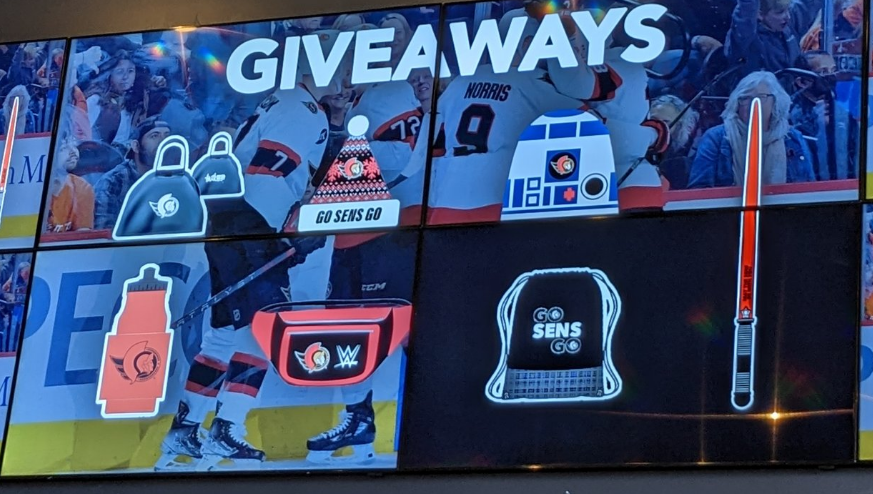 We got a preview of the lightsaber for Star Wars night, which has the words "MAY THE SENS BE WITH YOU" inscribed on it. 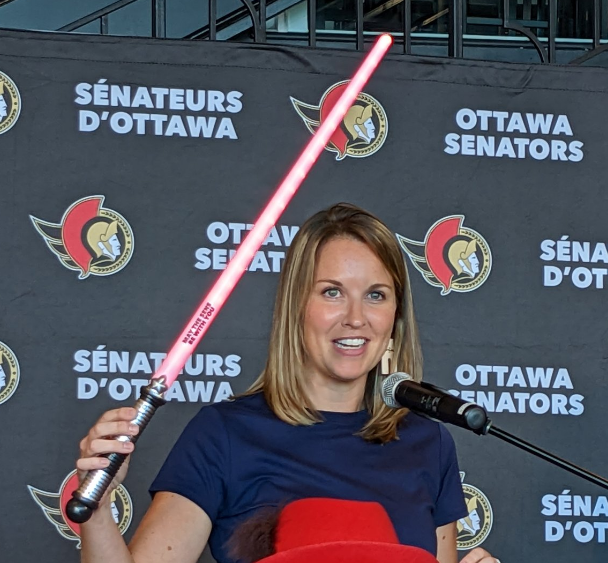 The team also released which community nights they'll be doing, but no dates attached yet. 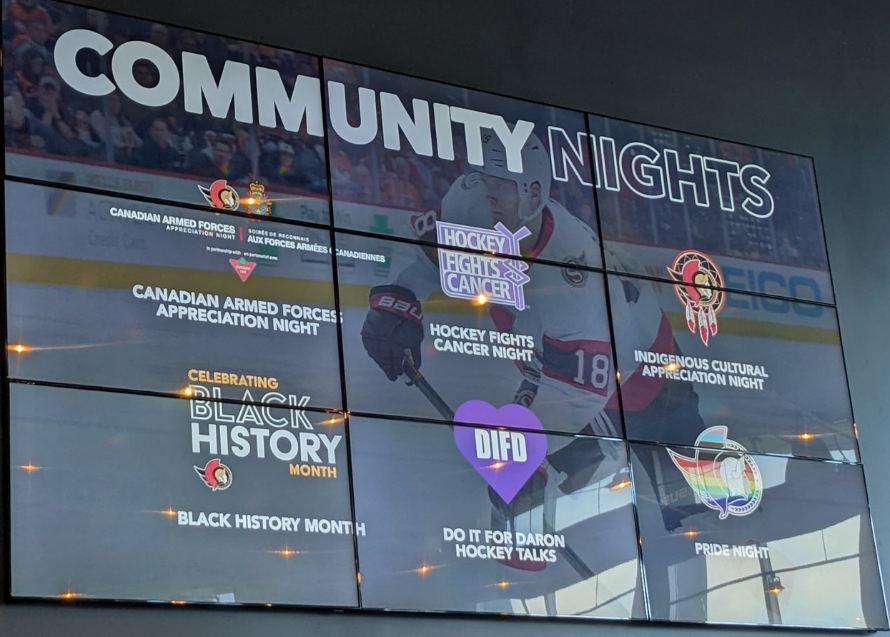 Next on the list was an update from Aramark on the new food additions. It's no secret to anyone who went to games last season that the food experience was underwhelming compared to pre-COVID. 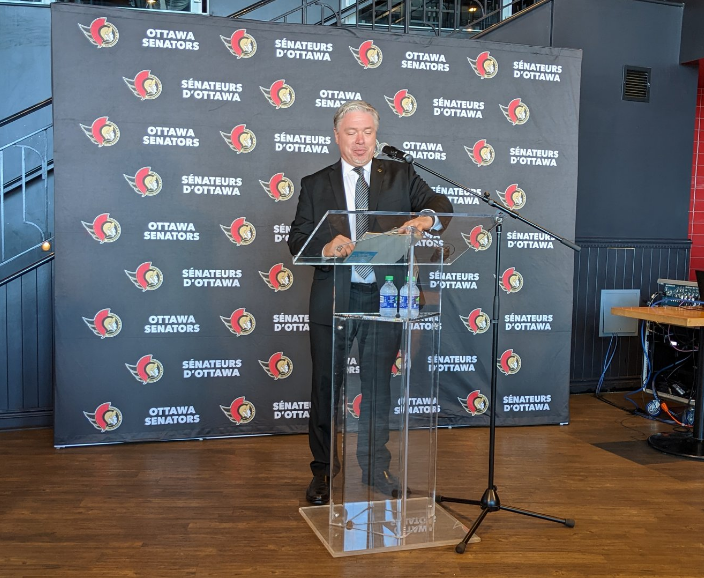 This season the Sens are going to have a new fancy self checkout food location. From the rendering it appears to be replacing the Sens Store in 200/300s level when going up the stairs to the right from the main entrance. 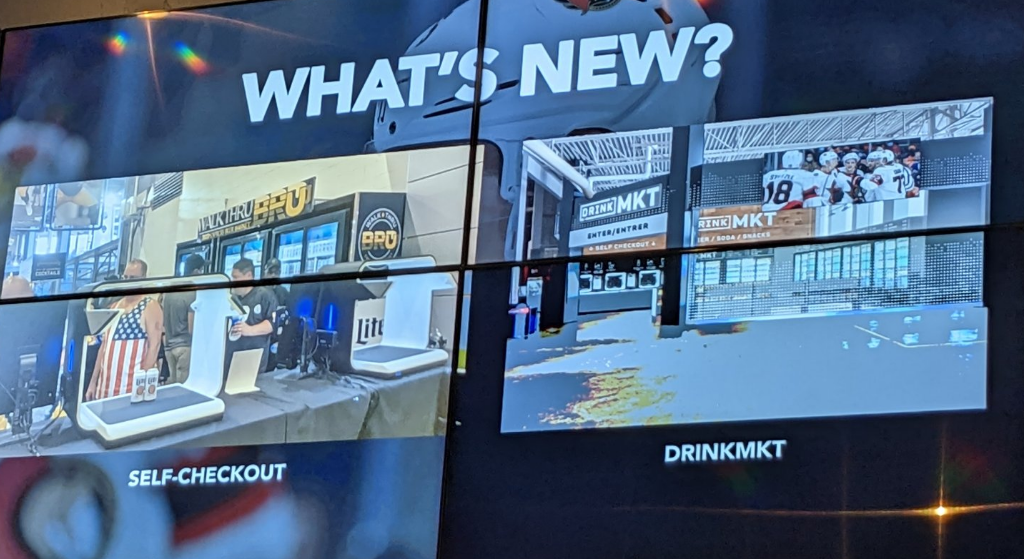 The team is also making a focus on being more environmentally friendly by pushing reusable tossware that can be kept as souvenirs. 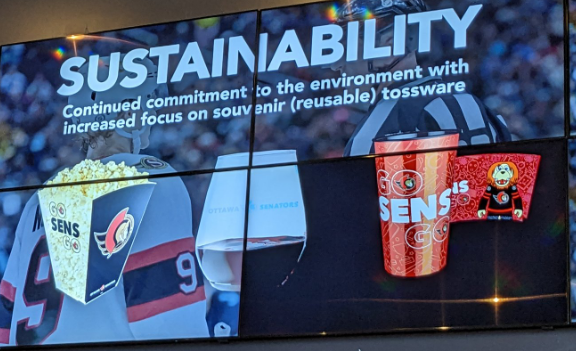 We also got a preview of all the new food items being added, many of which will be available in concession stands. The one that stands out is the 30th anniversary poutine, with black gravy and red toppings to try and match the Sens colours. 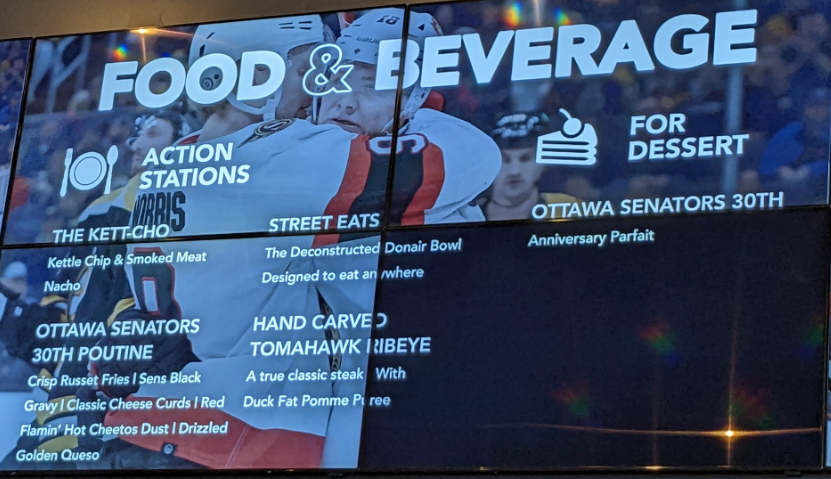 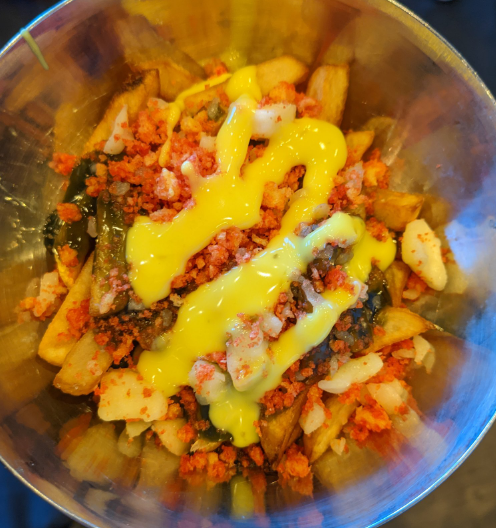 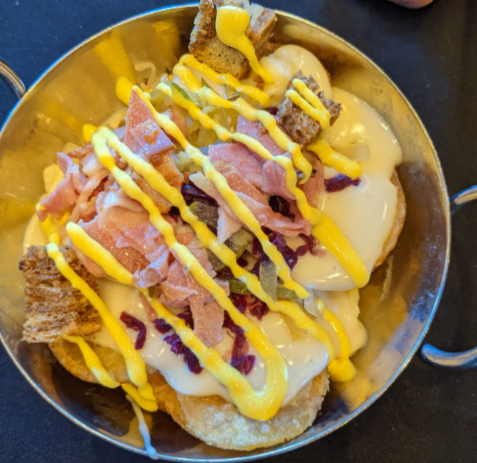 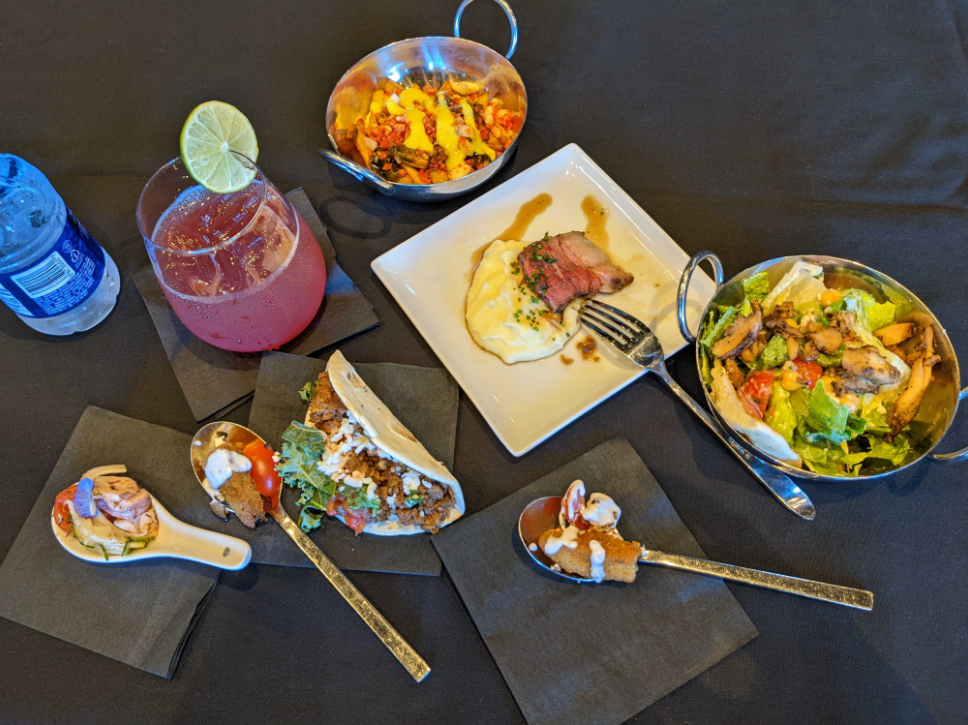 We got to sample most of the dishes and I will say the poutine was solid, but surprisingly the deconstructed donair bowl was surprisingly flavourful. It will nice to have some additional choices at the game, especially for those who go to a large number of games.

This was followed up with a quick Q&A with one of the newest Ottawa Senators, Alex DeBrincat.

@OToole_19 asked him if any players reached out after he was acquired. Said Brady Tkachuk and Thomas Chabot were two of the first to contact him, and many more after that.

This was followed up by a question from @LalimesMartian.

My question for Alex DeBrincat pic.twitter.com/ukHdMrMCPj

Pierre Dorion was gracious enough to spend 10-15 minutes with us Twitter influencers to answer a couple questions and we got some cool snippets.

On the analytics front, he said it's "today's world" and that he understands it way more than when I had asked him about this back in 2015. He looks at it after every game, with a particular focus on zone exits, but also looking at stuff like A/B/C quality chances, and 5v5 data. Also made note to point out DJ Smith is also invested in it as well. This was definitely an answer that'll please a lot of the fans who were upset Sens weren't leverage analytics as heavily in the past.

On the defence front, Dorion mentioned it was wide open, but don't expect to see a trade before camp. From a forward perspective, he listed Viktor Lodin as a guy he could see competing for a spot. It's one of those names we don't hear too much about right now. He did bring up Ridly Greig, and mentioned how he wanted to continue playing in the WJC with the injured shoulder, but told him "no chance". Also mentioned that they are looking to provide a PTO to fit a role they currently don't have.

There was a funny moment where Dorion mentioned he would take an 0-8 pre-season record if they came out of it with 0 injures. He yelled that out to DJ across the room, and DJ paused before responding "We'll take one win!".

To end the day, we got the biggest surprise of all (which is now common news). We saw Tim Stutzle enter the room with Pierre later on, but for me personally, I wasn't even thinking extension, but just another interview. But once they sat down it became pretty obvious what it was.

An eight year extension at $8.35. Stutzle said he didn't even know about the extension to tell his teammates and that he only found out when his agent texted him. What a way to end the event, Summer of Pierre indeed. Thanks again for the Sens for hosting us and giving some fans the inside peak. So many of the executives and hockey staff took their time to introduce themselves to us and have a quick chat. I'll end this post with a photo dump from the extension announcement. 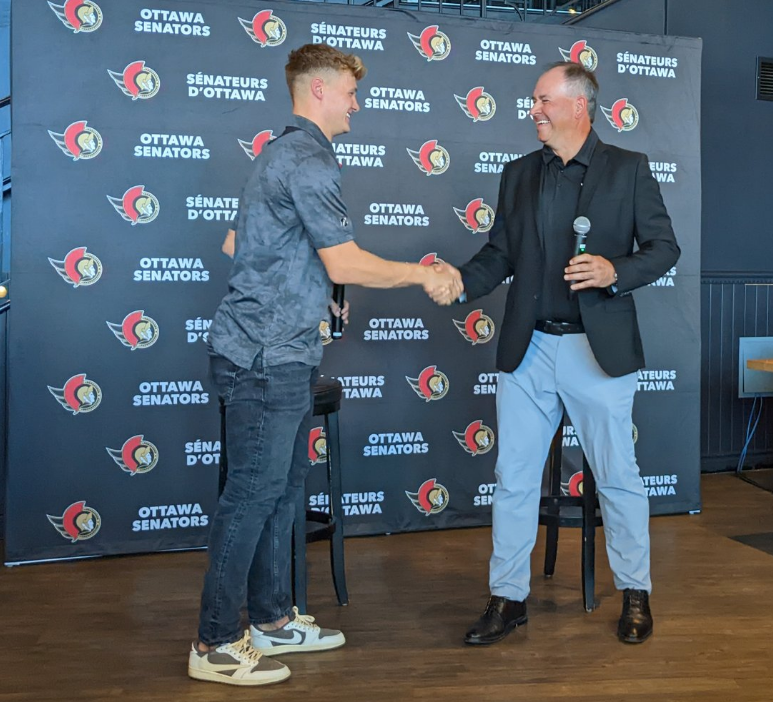 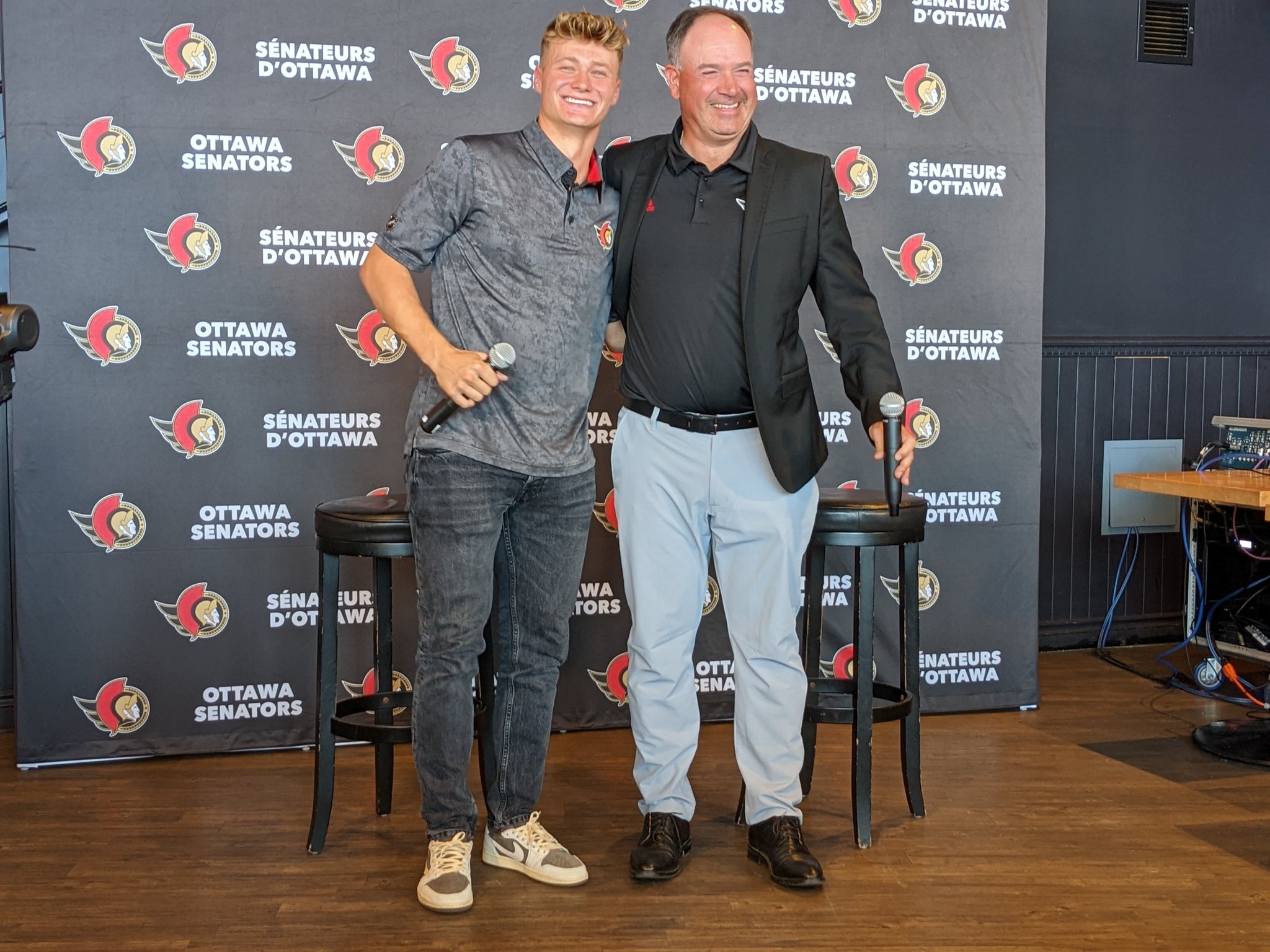 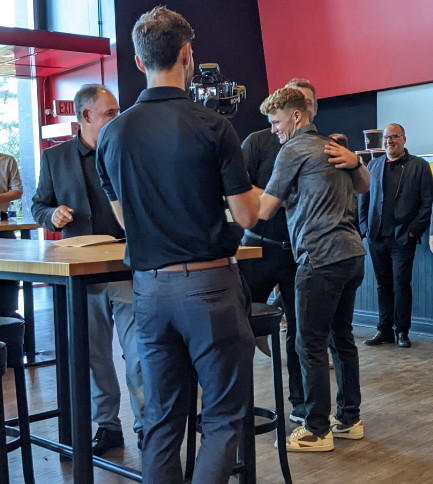 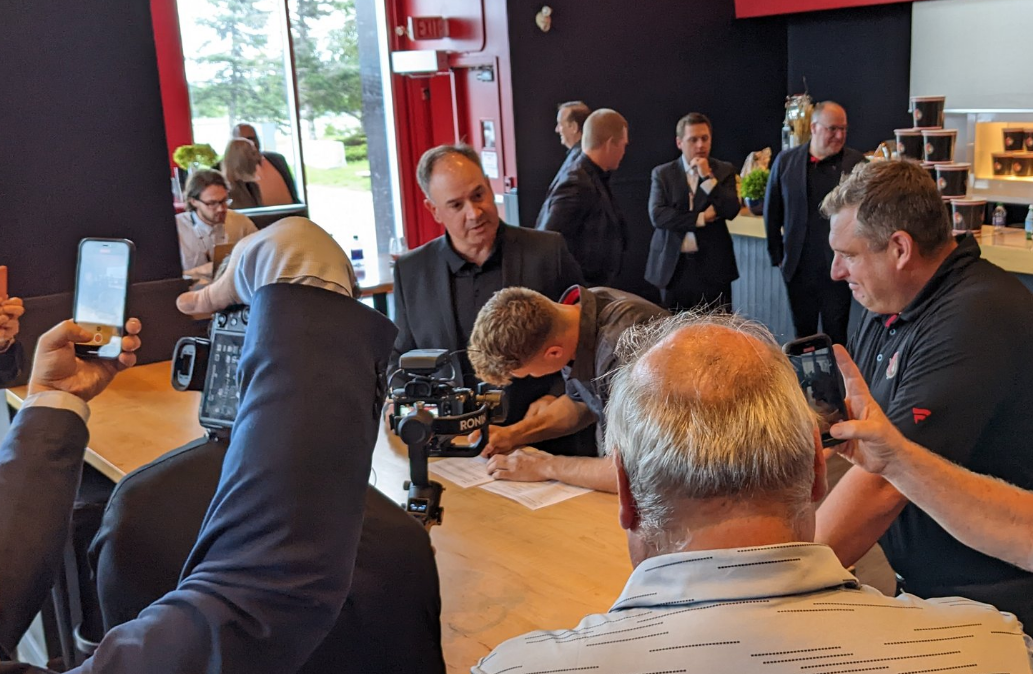 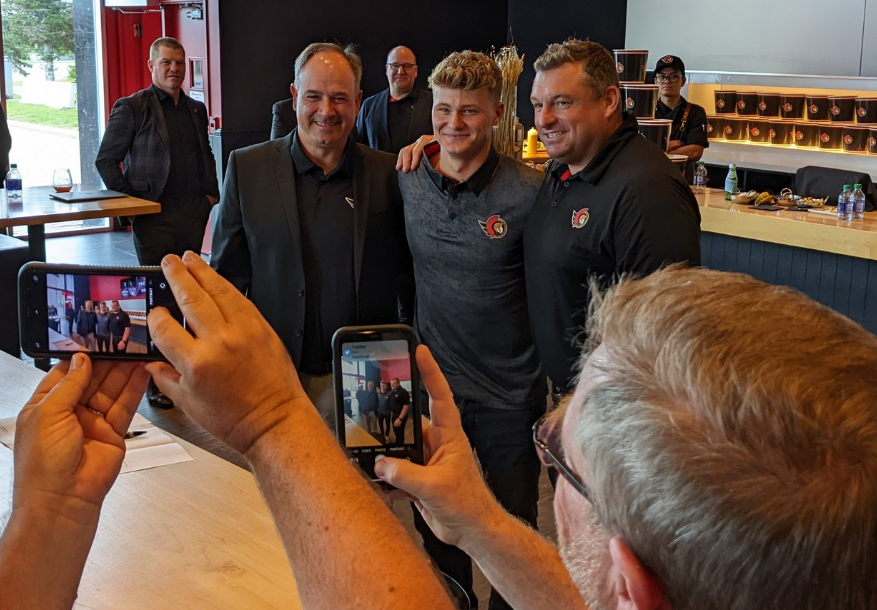