One of the biggest aspects of being a sports fan is being thoroughly invested in the success of your team. That feeling had faded for many Sens fans as of late, with the selling off of homegrown superstars such as Erik Karlsson and Mark Stone. Combined with the expected mediocrity in the standings, there was noticeably less investment by fans. Both on social media where engagement had dropped, and in terms of ticket sales which had plummeted to the bottom of the league.

The other biggest aspect of being a sports fan is hope. When you're at rock bottom, you need something to look forward to. It took a couple of years, but that feeling has finally returned to Ottawa. A long term extension to potential future captain Thomas Chabot combined with one of the deepest prospect pools in the NHL (when Lassi Thomson is #18 on your Top 25 Under 25, you have to be excited), Sens fans can almost see the light of being a contender as promised by ownership.

There's a thin line between hope and being thoroughly invested. The 2019-20 season had more of the former, but not so much of the latter. Fans were well aware the season would be long and painful, but still had a strong developing prospect pool, along with stars such as Chabot and Brady Tkachuk who are expected to lead the competitive years. A bottom finish was in the best interest for long term success. Buffalo showed that fan interest in terms of ticket sales could still happen in a tank year, when they openly went for Connor McDavid (eventually landing the number two pick Jack Eichel instead).

This was not the case for Ottawa. Ticket sales in the 2019-20 season were miserable. Was this because of the tank season, or was it a combination of lack of faith in ownership? Maybe the recent departure of fan favourite Mark Stone was the straw that broke the camel's back? It was probably a combination of reasons for most, but they did not care to show up to the arena.

The poor marketing team had an insurmountable task given the roster on hand. With all the veteran superstars traded away, that left developing stars Chabot and Tkachuk as the main players to push for advertising. Remnants of the 2017 run such as Jean-Gabriel Pageau and Craig Anderson offered some appeal for those fans looking to have longer tenured players to cheer for. However, a marketing team has to go beyond a couple players, and with the roster available, there were only so many players to choose that they could use on marketing material. The end result, is having Nikita Zaitsev on the front of your building. That doesn't quite inspire fan interest or investment. 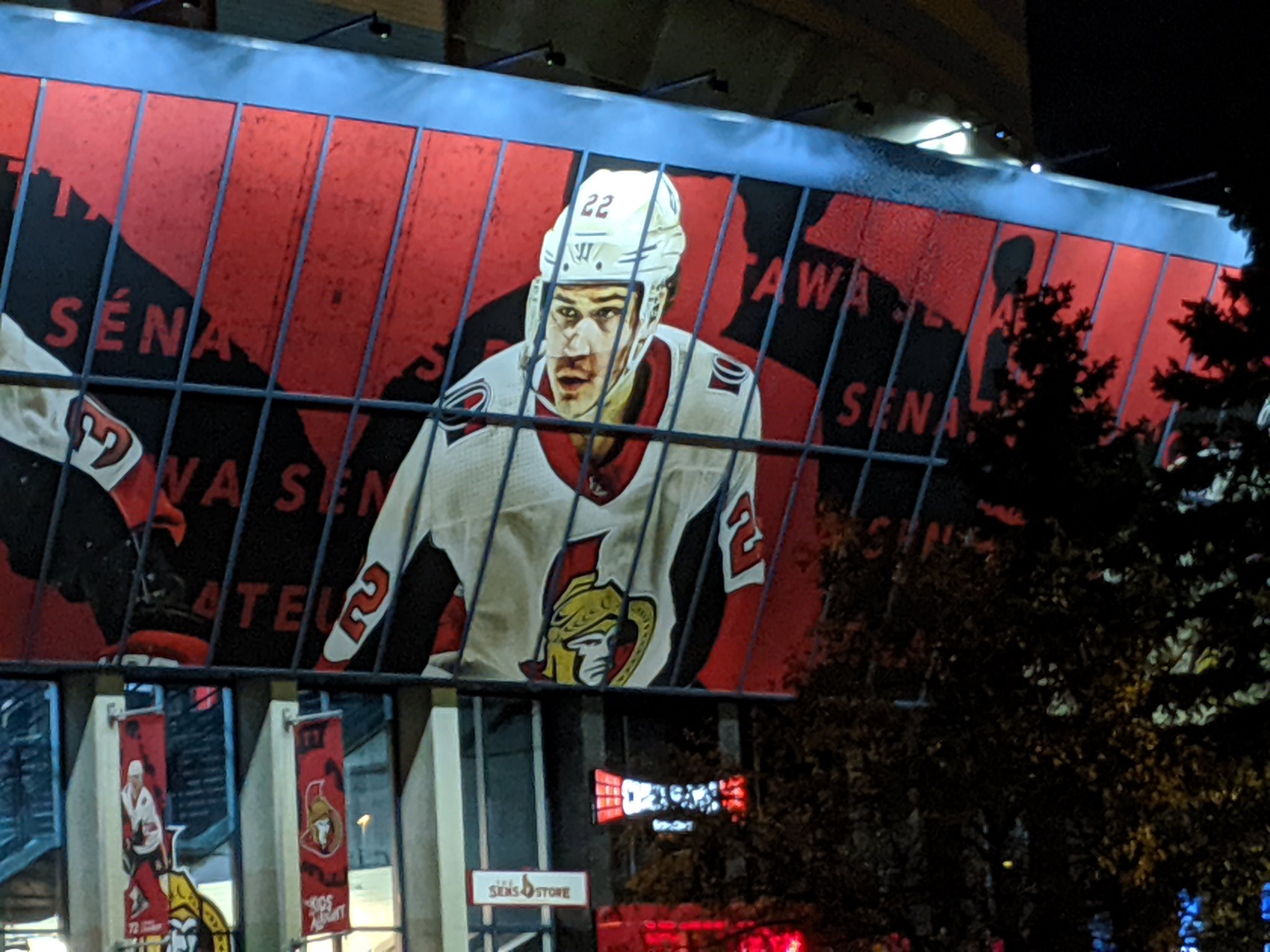 Fast forward to the 2020 draft lottery. The Ottawa Senators have two shots, and the best odds at landing the number one pick Alexis Lafrenière. Fan engagement on social media is high as it's ever been. The opportunity to land a franchise changing player is what hope is built on. Luck doesn't go their way, but the Sens do end up getting a top 3 pick and the opportunity to pick one of Quinton Byfield or Tim Stützle. Both players that are expected to have strong long lasting NHL careers, and can potentially make an impact immediately.

Fast forward again to the 2020 NHL draft. Fans are tuned in, accepting that either way they'll be landing a potential franchise altering player. The Sens marketing team is finally able to get the fans excited by bringing back the 2D jersey, at long last getting rid of the 3D centurion and putting Ottawa near the top of the best jerseys in the league. They would pull off another surprise shortly after, having Ottawa legend Alex Trebek announce the pick of Tim Stützle at number three. Seeing him put on the black 2D jersey inspired excitement and optimism long lost in Ottawa. Hope was skyrocketing.

COVID unfortunately resulted in the loss of the 2020 AHL playoffs, meaning Sens fans would miss out on the loaded Belleville Senators trying to compete for the Calder Cup. Unlike the 2011 Calder Cup win by the Binghamton Senators, this potential run would have been led by the youth, all prospects that could eventually be on the Ottawa Senators. A successful run would have definitely added even more hype for the fanbase in terms of the prospects. Nevertheless, even losing out on that, Sens fans remained optimistic as ever on the prospect pool, especially given the large number of additions from the 2020 NHL draft.

The 2020 offseason has seen Sens social media return to its highs. There's now more bloggers, podcasters, and photoshoppers than ever. Several blogs from the early 2010s had gone darks for various reasons, and finally some have come to take their place. On Twitter, there's more activity than I've seen in quite some time, likes, retweets, and replies are flying. The fanbase is clearly excited from the social media side. Fan investment is coming back.

In recent days though, there's been some infighting among Sens fans in terms of the moves done by Ottawa. In this offseason alone, they've added veterans:

Puzzling to many fans is the fact it appears there will be little roster room for the prospects to challenge for spots. Many are reaching 22-23 years of age, and getting close to the age where a long NHL career could be unlikely. Having followed these prospects for years, many would like to see them to get the opportunity. Especially for a team not expected to challenge for Stanley Cup quite yet. Some prospects had above PPG paces last year in the AHL, what more is there for them to show at that level?

Of course, given COVID, this is an odd season. A Canadian teams bubble, having a taxi squad, potential COVID cases, the question of whether an AHL season will happen... there's a lot going on. And we don't quite know what the Sens have in mind either. Maybe they will willingly scratch veteran players (as we saw with Mikkel Bødker last season) if prospects impress. The lack of exhibition games may make this challenging for them though. We won't know how this will all play out until the season gets underway.

I think this has lead to what I consider an investment quandary. With such a deep prospect pool, the future looks as hopeful as ever. We'll likely be seeing top prospect Stützle play this season in the NHL. Some of the veterans acquired may surprise. Maybe the Ottawa Senators will actually compete for a playoff spot, or they could end up near the bottom again. There's just so many unknowns, it's hard to tell where this season will go. Yet, one thing I think many will agree on, it's hard to become fully invested in the roster as it stands right now.

We've seen it in the past couple seasons, where players come and go from the Sens roster. You have veterans like Ron Hainsey brought on to mentor. Players like Tyler Ennis are brought on with the intention of giving them a larger role and likely trading them at the deadline with their improved numbers. Then you've got the deadline players who are just meant as roster fillers, such as Brian Gibbons. Sometimes you actually end up with what appeared to be a short term player like Anthony Duclair, but ends up endearing themselves to the fanbase. Of course, even with that, negotiations didn't play out, and he's no longer an Ottawa Senator.

It's just hard to stay invested in a roster with such high turnover. You'll never get the names of these players stitched on the back of your jersey, knowing this is just a short stop in their career. And with the many additions to the Sens roster this offseason, it feels like another year of that. For me personally, I find it hard to become fully invested, despite my excitement at the upcoming season. I want to see more of the roster filled by the hope of developing prospects who could very well become the corps of our contending team for years to come. Players who can be safely added to a jersey, and a larger part of the roster that stays the same year to year.

Despite the increased social media activity, I'd have been curious to see how ticket sales would have played out had COVID not been a thing. Given the roster as it stands today, I think there would have been only mild improvement, mainly due to many wanting to see Stützle live. However, I do know of some season ticket holders who have returned to the fold, knowing how close the prospect pool is to graduating, and wanting to lock in seat placements before the general majority return. From a player perspective, the marketing team would again be leaning on the same players as before, along with using Stützle as a centerpiece. Luckily for them if there's ever a year to have a whole ton of one and done veteran players, this is it. With no fans in the crowd, there's no need to worry about selling tickets and marketing players as much. It would have been a tougher sell to fans. It's a lot easier marketing the graduate prospects that fans have followed and the hope that comes with that.

All in all, COVID may have worked out for both the Sens and the fanbase. With lockdowns in place and few activities to do outside of the house, the Sens have the opportunity to fill that entertainment void, and the shortened season should keep social media engagement high, regardless of how the team performs. The team itself doesn't need to worry about ticket sales, and can put their effort towards increasing the season ticket holder base for 2021-22. We've been saying it for the last two years, but it appears that 2021-22 will finally be the year that the team graduates a larger number of prospects to the big league, and we'll see the number of one and done players decrease. With the hope that will provide, fan investment should increase, and I think we'll finally see a continuous uptick in social media engagement and ticket sales. That is the moment we've been promised and been waiting for. A team that can compete for several straight seasons, and I can't wait to be around for that.