All credit for this fanpost concept goes to Ryan Pinder of Sportsnet 960 The Fan, who suggested a very real scenario for Pierre Dorion. The fact that they were even talking Senators piqued my interest, and I was full satisfied by the logic of his suggestion. It is a deal that would make trading Mark Stone for Erik Brannstrom (+) look like just another day at the office.

This would be a bargain for Cirelli. AC will remain a Selke candidate for the next half decade at least. He would immediately become our 1C, but we'd still be paying him as a 2C if and when Logan Brown or Tim Stuetzle ascends to the throne.

A young RHD with a mean streak wide enough to park a trailer on. Cernak is another Stanley Cup champion who would be a hammer in our Top 6 for years to come. Josh Brown level physicality with more upside.

Each one of these sheets if left unmatched would cost us a 2nd round pick. Cernak and CIrelli would be absolute steals at such a low price, and wouldn't you know it - we already have two extra second round picks!

You're probably thinking "But FMF, Tampa would surely match such reasonable offers!" . I think they would try, but they have the space. They have to free up money for Sergachev still, which leaves two very good players on the back burner. Brisebois could be forgiven by Lightning ownership for losing such players to salary concerns in a flat-cap World. 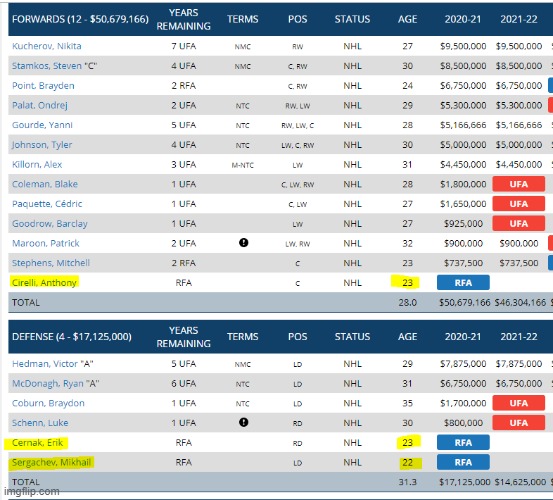 What say you? Should Dorion flex his draft capital on one of his more junior peers? If only one of those offers got matched by Tampa - which player would you prefer? Is there another team, similarly hamstrung by their salary cap, that has more suitable targets for a double offer sheet? Let me know in the comments.

Which of the following players would be more valuable to the Senators lineup starting in 2020-21?