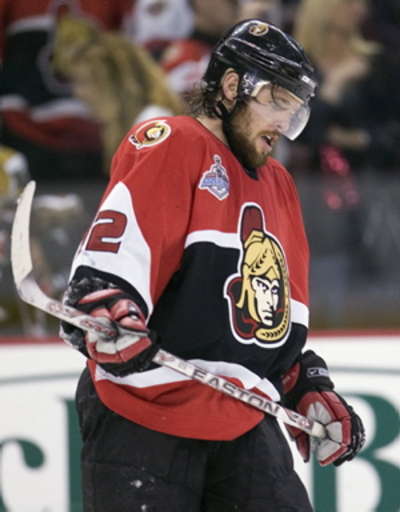 Those "swoosh" jerseys though...

We all know that one of the tendy's has to go. All we can do is speculate as to how the situation will play out, but there are two scenarios that seem more plausible than the rest. Scenario #1) buyout Mike Condon. Scenario #2) trade Hogberg's rights.

If it does come down to these two options, I'd think almost all of us would rather wave goodbye to Conny. Hogberg was a Top 5 goalie in the AHL last season, and is still only 24. Originally drafted in the 3rd round, I would hope that Dorion would not settle for less than a 3rd as a trade return. Considering how well he's adjusted to the North American game, and the years they've spent working with him, I truly hope they see the value in bringing Hoggy back.

Who needs a President, anyway?

The whole "search" seems to have gone off the rails, a little bit. The team is now claiming that their search will get underway once the playoffs have finished, so I guess time will tell. I find it strange that the league was publicly pushing for the Senators to fill this position. Bettman and Daly rarely speak publicly about league business, so this tells me that they are keeping a close eye on the state of things in Kanata. Throw in the fact that Dorion and Melnyk have been non-committal about the position itself (saying that they may just hire a "Senior Advisor") - and I'm getting the sense that the powers that be don't really want to hire a President.

As there is no salary cap for hockey operations, I'd like to see the team add to Dorion's staff.

RFA's? Who goes? Who stays?

Colin White: in my view, the team should commit to Colin this Summer. Offer him a 6 or 7 year deal, and only then offer a "bridge" contract if no resolution can be met on a longer term. I understand that teams need to be careful in managing the cap. I understand that a 7 year deal comes with a certain amount of risk. But, I like Colin White, and he really seemed to blossom last season. I don't like the team's history of taking players to arbitration, and negotiating "prove it" deals with seemingly every upcoming free agent. For an owner who fervently denies any financial troubles, and a GM who similarly claims that "money is no object" whenever the subject is brought up - it is high time to take tangible steps to proving they mean what they say. Pay the man.

Anthony Duclair: the Duke of Goalsbury was seen as a throw-in piece of the Ryan Dzingel trade. Then the darnedest thing happened. Duclair outscored Dzingel the rest of the way, last season. I understand there are questions about attitude and work ethic - but the talent is undeniable. For a team who traded away many of their best scorers last year, Duclair should be a productive stopgap until the next wave of forwards start filling the nets. 5th team in 5 years? All I see is Cost-Per-Point. For a talented kid, still looking for a long term home in the NHL, a 1 year offer probably won't inspire much devotion to the team. Sign him to $1.5MAAV for two years, with some incentives that could push the value up to $2M.

Cody Ceci: the team is reportedly looking to sign Cody to a long term extension. So... there's that.

Morgan Kilmchuk, Andrew Tambellini, Jack Rodewald, Nick Paul: I honestly don't see any of these guys playing in the NHL next season, so I don't have a lot at stake here. I watched only a few Belleville games last season, so I am no expert in what these guys bring to the table. By all accounts (and by all, I mean spencer's write-ups, here - hi Spencer!) Nick Paul showed well last season, playing with Brown and Bath. His tall per 60 is through the roof. Keep. Klimchuk came over from that blue and white trashpile in a trade for Gagne. A career AHL player and a good ol' Saskie boy? Keep. Rodewald? Late bloomer who had his best numbers last year? Keep. Tambellini? I remember him tearing it up for the Hitmen, once upon a time. Other than that, I have no feelings about him.

With the draft rapidly approaching, I am a little surprised we haven't seen more draft profiles as of yet. I feel like when it comes to the different aspects of his job, I might trust Pierre the most when it comes to drafting rookies. I have been reading different mocks and I've seen no real consensus picks for the Senators in Round 1 (not surprising, as picking 19 leaves a lot of room for the board to shake out in many different ways). Everything from skilled forwards like Alex Newhook, to hulking German defender Mortiz Seider, and even Goalie prospect Spencer Knight have been mocked to the Senators at 19. It's hard to look at our roster, and not think "they need to take some RHD", but the philosophy of BPA must win the day. Regardless of who they choose in round 1, this year I am hoping that Pierre and friends might use some of their 2020 draft capital to move up the board in 2019 for someone they really like. NHL readiness means less to me than any given player's ceiling. We need high-skill difference makers. With 1 pick in the first, and 2 in the second, I hope Pierre grabs some prospects that we can really get excited about.

Tomorrow is June, and yeah, the playoffs are still happening. Despite what has been an exciting, and certainly unpredictable, offseason - I personally have been mostly checked out on this NHL season for a while now. I am also an avid football fan, and with the NFL also in limbo, I am looking forward to the CFL season (Go Stamps Go!). I despise Toronto based franchises, and the NBA in general (I mean, seriously, call 5% of travelling fouls at least... and don't get me started on 6 timeouts per team and the fact that the last 90 seconds of any given game takes 20 minutes +), so needless to say I am not watching the Raptors. Without organized sport, and with HBO's Chernobyl wrapping up, I have very little reason to watch TV. I'm planning on putting in a ton of hours at the driving range and out on the municipal golf courses this Summer. It's high time that I put in the work and take my game from "objectively awful" to "still, really quite bad".

Which leads me to a final question for the readers: how do you like to spend your free time in the Summer? Favorite parks to visit? Concerts/festivals? Road trip!? Fishing? Bicycling? Let me know in the comments below!