Could fixing the power play be as easy as using the right combination of players?

One of the biggest problems during the recent losing streak has been the lack of power play success. Only one goal in 25 power play opportunities. Only three power play goals when you look at the last 10 games.

It’s a small sample, but the answer may be sitting right there in front of us.

Start with a simple question - who has been on the ice for those few power play goals? With only three goals, it’s a short list. A very short list. In fact, there are exactly five players on it.

...then the 0:07 it took them to score on their third shot as a unit against the Islanders.

Yes, that is the exact five man power play unit that has been on the ice for each and every one of the Senators power play goals in the past 10 games. How much time have they spent together on the power play? Only 5:40, of over 67 minutes with the man advantage in that time.

How many shot attempts are they getting off? 19 in that limited time frame. As a rate, that’s 201.2 attempts per 60 minutes of play - in just over 60 minutes of PP time without those exact five players on the ice, the Sens have managed only 88. Their whole stat line is gaudy in that way - 148 unblocked attempts per 60, 127 shots on net per 60, 31.8 goals per 60. If they’re out for the first half of a power play, half of the power plays wouldn’t make it to a second half. 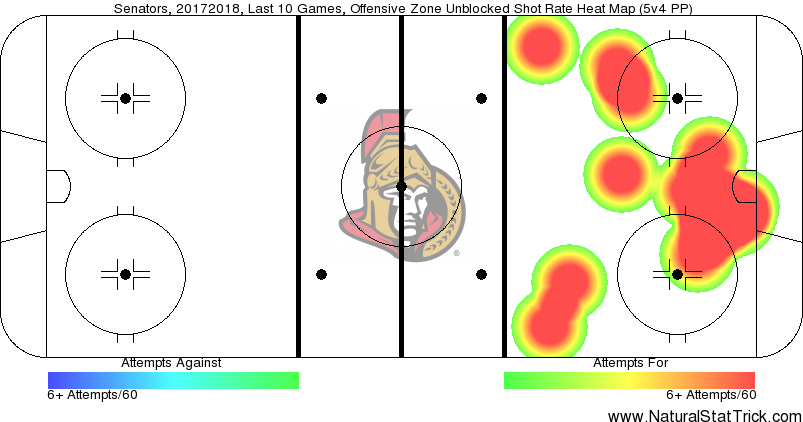 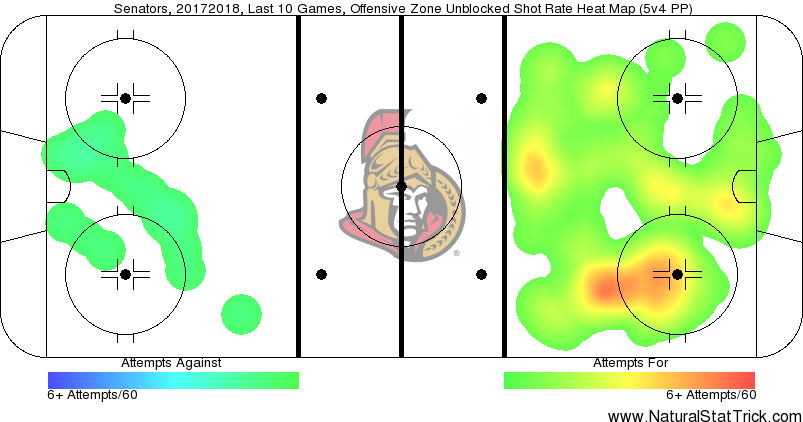 Left, PP with Stone-Duchene-Brassard-Hoffman-Karlsson. Right, all other unblocked PP attempts in the past 10 games.

Numerically, that’s 105.9 scoring chances per 60, with whopping 63.5 of those being of the high danger variety. The team’s average in those two categories on the power play over the past 10 games is 44.7 and 12.5 per 60 respectively. They have contributed almost half of the team’s high danger chances, in under 10% of the team’s power play ice time.

They have also only been together on the power play for three of the nine games since the Duchene trade - the second game against the Avalanche where they scored twice in 4:19 of play, 1:14 against the Capitals, and then the 0:07 it took them to score on their third shot as a unit against the Islanders.

Last night against Montreal, both when up a goal and then when down a goal, it was Alex Burrows deployed instead of Derick Brassard on the power play. We saw how effective this was.

Start icing a power play unit that has actually had a taste of success in recent memory. It’s woefully under-utilized, and the team desperately needs the goals.