Mark Stone. We love him for his goals, his celebrations, his flailing, and his takeaways. For such a young forward to be playing with poise, confidence, and skill is very unfamiliar to Sensfans of late.

Even the great Alfather holds him in high regard:

Impressive SENS, If Stoner don't win the Calder I should give him mine. #Bigtime

I was looking into the process by which we came about acquiring Mark Stone, and realized that it's all thanks to one fateful trade back in 2009

Yes. Thanks to trading Alex Auld to the Dallas Stars, we acquired a 6th round pick (previously belonging to San Jose) that netted us Mr. Mark Stone himself.

I have always loved roster moves. I don't really know why.

I have three favourite hockey days of the year: Trade Deadline, Draft Day, and July 1st. Something about valueing a player, and trading assets piques my interest, and I can't be torn away when there are any moves happening.

About a year and a half ago, I created my first version of the Senators Roster Map which was closely followed by a much more polished version by SSS member apajohnson. apajohnson, if you're still out there, I invite you to make a cleaner version than mine. Yours rocked.

I hadn't done this in a while, so I figured, why not do it again! I originally got the idea from Minor Leaguer over on BlueBirdBanter, when he did one for the Jays.

The last time I did this was in December 2013: I've also expanded on a few routes to show how we got certain players: Puempel is a rather convoluted one! 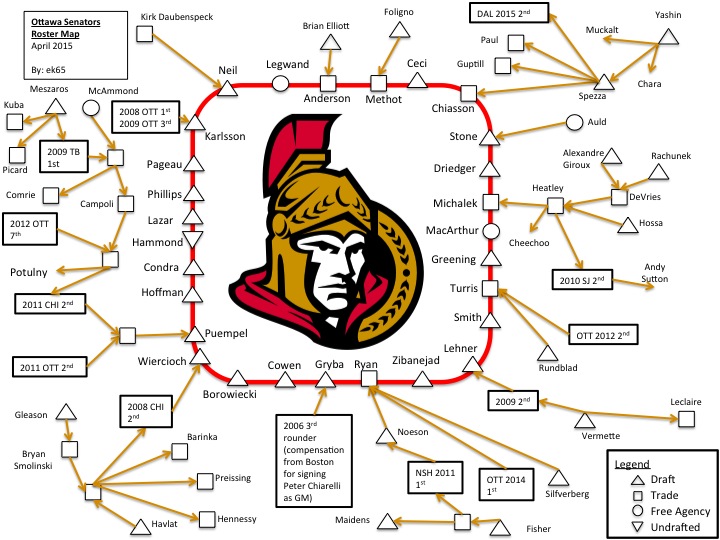