Robin Lehner has a number of desirable traits that teams love to see in a potential star goalie. Size, athleticism, and a fantastic resume - all at the young age of 23. Lehner has been billed as the "goalie of the future" for a while now, and it's about time to see what he's got. First, let's take a look at how he got here.

Lehner is a butterfly goalie who uses his 6'4 frame to his advantage by aggressively challenging opposing shooters. He's very athletic, with good lateral mobility, which is a testament to his fitness and conditioning level. We all know Lehner as a very competitive player who will do anything to win. He was previously prone to outbursts, and talks about hunting his competition, but has since matured (booooo!). ESPN's Corey Pronman, who is often harsh on goalies, had Lehner as his second ranked goalie prospect after Tampa's Andrei Vasilevski and ahead of Anaheim's John Gibson. Here's what he had to say about Lehner in 2013:

The Good: Lehner has true plus, if not better athletic tools in net. He is a big goaltender and he moves extremely well in the crease for a man his size. NHL sources describe him as a big goalie that moves like he's 5'10''. To combine with his agility, Lehner is also a very smart goaltender that reads the play well and squares up a lot of pucks while the play is in motion. He covers up the net really well with his angles, and he recovers quickly.

The Bad: Lehner's rebound control could still use some work. He can also try to be too cute at times with his leg saves and lateral movements.

Projection: He could be an above-average starting goaltender.

Developed by the Frolunda program, Lehner had world-class training from Sweden's highly qualified goaltending coaches. James Mirtle has a now old, but very good read on the Swedish development system and the emphasis they place on goaltender development that I highly recommend checking out. After putting up great numbers in the J18 league for two years, coupled with a .916 sv% as a 17 year old in the Under-18 World Juniors, Lehner was drafted 46th overall by the Senators with a pick acquired from the Columbus Blue Jackets in the Antoine Vermette - Pascal Leclaire deal. From here, Lehner took an unorthodox route and came to Canada as an 18 year old, joining the Sault Ste. Marie Greyhounds for a year in order to play in more games. He ended up appearing in 47 of the Greyhounds games, posting a respectable .918 sv% and was named to the OHL All-Star game following two CHL Goaltender of the Week awards.

From there, Lehner was able to turn pro at 19 due to his European prospect eligibility, and appeared in 8 NHL games, along with 22 AHL games. Barry Brust was the 2010-11 starter for the Binghamton Senators, but after he struggled in the first round of the AHL playoffs, Lehner seized the job and never turned back - winning three straight overtime games, including Game 7 versus the Manchester Monarchs, before going onto beat Portland, Charlotte, and Houston to help the BSens win their first ever Calder Cup. Lehner's .939 sv% in 19 games won him the Jack A. Butterfield Trophy as the AHL playoffs MVP, joining Carey Price as the only other teenage goaltender to do so.

Lehner has always been known to struggle with the mental part of the game sometimes, with his concentration faltering and leading to sloppy play, and thus had to go through some personal growth in 2011-12 with the rest of the BSens as they struggled to repeat their play. The loss of many AHL veterans and key pieces from the Calder Cup winning year took its toll, with the team finishing last in their division and Lehner finishing with a .907 sv% in 40 games.

Credit to Lehner, he rebounded in a big way in 2012-13, posting the AHL's best sv% (.938), and earning a 12 game stint in Ottawa, where he impressed management enough to have Murray and co. trade away Ben Bishop to Tampa Bay, essentially "picking" Lehner as the goaltender of the future and rewarding him for his improved fitness in addition to his excellent performance.

This brings us to this year, where Lehner entered the season with a guaranteed NHL spot and subsequently appeared in the most number of NHL games of his young career. However, Lehner struggled at times, finishing the year with a .913 sv% - though there was marked improvement in his numbers in March and April where Lehner played a majority of his games. In the team's exit meetings, both Bryan Murray and Paul MacLean said that their goaltenders had good years, and that team defense was more of an issue. There's some empirical evidence that lends notion to that, as out of all 55 goalies who played 1000+ minutes this season, Lehner saw the 3rd most shot attempts against - after Toronto's duo of Reimer and Bernier. Although that doesn't absolve Lehner of all blame, I'm sure it's not easy to be playing for a team that allows a ton of scoring chances against.

All in all, both Lehner and Craig Anderson finished with average numbers at 5-on-5, which is about .922 - .923%. Anderson fared better at even-strength, but Lehner had a fantastic .912 sv% on the penalty kill. Based off of career numbers, I'd expect that trend to reverse this season, but what should we expect from Lehner overall?

Despite a shaky season, Lehner still finds himself in good company, slotting in at #15 with a .918 sv%, which is tied with teammate Craig Anderson. One caveat of this type of analysis is to remember how volatile goalies are. Eric T had a great article on how to properly forecast goalies, and notes that with the more shots faced, the more we can get a true indicator of a goalies talent, and thus, we're more sure that Craig Anderson is ~ .918% goaltender than we are of Robin Lehner. However, given his potential in Junior and in the AHL, this are pointing upward for the young Swede. 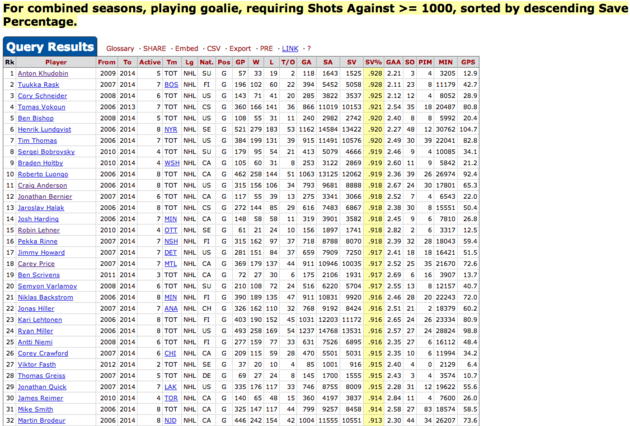 This inability to "seize" his opportunity may have led to an extension for Craig Anderson as an insurance policy for Lehner, thus setting expectations for the big Swede to have a big year in net. Forecasting models, including this one by Garik16, project Lehner as an above-average starting goaltender with a good peer group, which is something we've always expected from Lehner since he was drafted. With only Chris Driedger and  Marcus Hogberg left in the system, it's going to be Lehner's time for a while, especially considering that he's still a RFA after his current contract is finished. I'm excited to see what this season brings for Lehner, as he should see a lot of games, and I'm pretty confident he can live up to the hype of being our 3rd ranked player under 25.