The Ottawa Senators have held Fan Fests in September the past few years to get fans excited for the season. However, this year the team made the decision to make the event bigger than ever. The result was a fee being associated with the event, $10 a head (although full and half season ticket holders got in free, with all other package holders receiving a discount of $2.50 a ticket). There were a few complaints here and there about the Sens charging for the event, especially when they haven't in the past. However, they made sure you got your value right off the bat. The first 10,000 people to purchase tickets received a Kyle Turris bobblehead at the event. One could easily flip the bobblehead for $15-20, more than paying off their ticket. 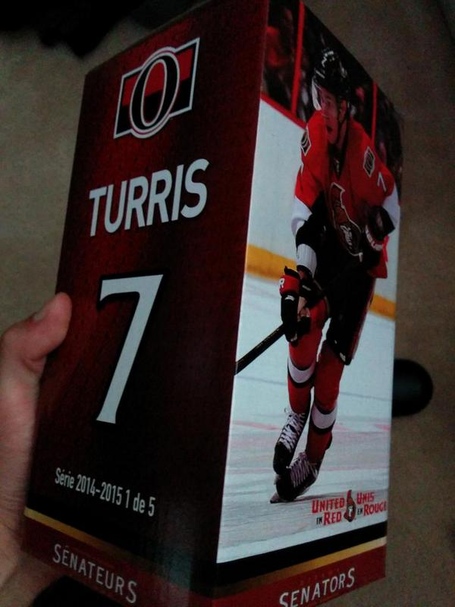 The event was scheduled to run from 9:00-5:00. Upon arriving at the event, you received a scratch ticket. This would give you the chance to win a guaranteed meet and greet for two with a roster player at either 2:00 or 3:30. If you weren't lucky enough to win that, you would either get a 20% off at the Sens Store, 10% off opening weekend tickets, or 20% off at Sens House. The Sens couldn't have asked for better weather and it was perfect for the outdoor events. They included all the inflatable activities for kids, a road hockey area for kids, and the giant tent for the Fan Press Conferences. On top of that there were various tents promoting the Sens partners including the Red Scarf Union (selling $25 tickets for the home opener in their supporter's section), Bell Sensplex, Sens House, and more. In addition, there was a Share A Coke booth where you could get your name printed on a Coke can (unfortunately it could only be your name, no "Go Sens Go" allowed).

Upon entering the arena, there was even more to do. Spread out around the 200/300 concourse were Sens combine tests such as the medicine ball throw or vertical leap. Fans could try them out and see their results. There were also several sports card dealers spread out in the 200/300 concourse for those sports memorabilia fans. It was the used equipment sale in the upper Sens Store that appeared to be the most popular though. The wait for this ranged around 30-45 minutes in the first half of the day as they only allowed around fifteen people in the store at a time to prevent chaos. There was a huge range of equipment to buy. When I got there to check it out around 11:15 they still had plenty of good stuff available, including game used sticks of all players (including Jason Spezza) and game worn gloves of players such as Chris Phillips, Jared Cowen, Milan Michalek, and Zack Smith. I'm certain they had even better items earlier in the day. The one thing I was disappointed at was the lack of locker room name plates which had been sold in the past. Below is a list of the game used equipment prices. 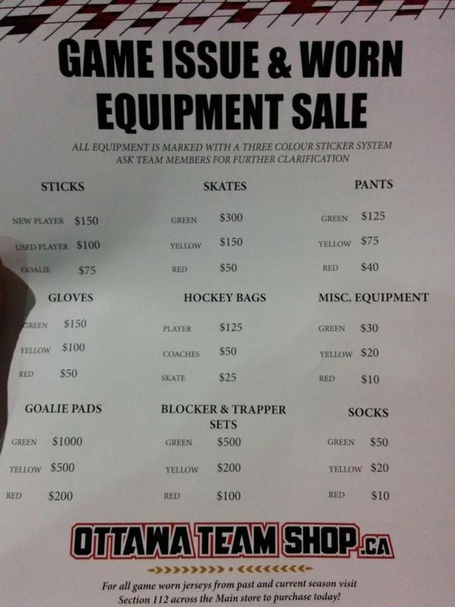 On top of the meet and greet, the team made players available for photo-ops and autographs sessions spread out around the 200/300 concourse at 2:00, 3:00, and 3:30 without the requirement of a scratch ticket. However, you did need to get a wristband to guarantee your spot at any specific station, and you could only have one on a time. I believe only one player actually ran out of wristbands before his line started. That would be JG Pageau who I was told ran out of wristbands at 11:00 for his 2:00 signing. New Senator Alex Chiasson was made available as well. His line appeared to sell out with only a few wristbands available at 2:00 which were quickly snatched up. Other roster players included Erik Condra, Zack Smith, Mika Zibanejad, Curtis Lazar, Mark Stone, and Cody Ceci. If you were unlucky enough to miss out on these players, you could get quantity over quality as other lines were fairly short and were allowing people in without a wristband. They also included some quality players such as Matt Puempel and Fredrik Claesson who aren't as well known to the casual Sens fan. The later 3:30 sessions only had Binghamton Senators players which didn't seem to draw that many people. That was good for those interested, as they were able to almost visit every station due to the small lines. The entire player list can be found below

Of course, season ticket holders got additional perks at the event. All of them were invited to Bert's for free refreshments which included a soft drink, hot dog, and popcorn. Suite season ticket holders were given true VIP treatment in Club Red where Erik Karlsson, Bobby Ryan, and Chris Phillips were made available for autographs and photos. If you were one of the lucky scratch ticket winners, you got to go to the Colosseum Room for a photo and autograph opportunity with a roster player. I was told that 150 tickets were winners for each player. The 2:00 session included Marc Methot, Milan Michalek, Craig Anderson, Chris Neil, David Legwand, Clarke MacArthur, and Kyle Turris. The 3:30 session included Robin Lehner, Mike Hoffman, Eric Gryba, Jared Cowen, Mark Borowiecki, Patrick Wiercioch, and Colin Greening.

On the ice, fans were treated to an Ottawa Senators practice at 10AM and a Binghamton Senators practice at 1PM. However, the highlight was the Senators intrasquad game at 11:15AM. It was broken down into a traditional 20 minute period 5 on 5 game, 10 minutes of 5 on 4 powerplay time for each side, and 10 minutes of 4 on 4 hockey. It ended in a shootout and provided fantastic entertainment for the fans in attendance. The team also discounted all food products (except Tim Hortons) by 50% which allowed one to easily grab a full meal for under $10.

Outdoors even more was happening with the Bell Booth offering the chance to see TSN 1200 personalities such as Ian Mendes, Steve Lloyd, and Shawn Simpson. Alumni were also made available at the booth for photos and autographs. From 9:00-11:00 Jason York and Shaun Van Allen were in attendance and at 2:00-4:00 Todd White and Shean Donovan were.

One of the biggest highlights of the event was what was going on in the Fan Press Conference tent which offered the chance for fans to ask questions to the players. At 1PM there was a panel featuring Cyril Leeder, Todd White, and Dean Brown which discussed "The Early Years". At 2PM there as a "Social Frenzy" panel featuring social savvy players Erik Karlsson, Bobby Ryan, and Chris Phillips. Karlsson provided some of the best one liners as shown below.

EK to Chris Phillips: "I remember you from the video games I used to play as a kid"

EK's favourite visitor's bldg to play in: "Mtl because everyone wants us to lose but we've beat them 95% of the time" #SensFanFest

At 2:45 there was a "Kids Only Press Conference" only allowing those 16 and under to ask questions to Eric Condra, Zack Smith, and Mika Zibanejad. The last panel at 3:30 called "Life On The Road" featured Cody Ceci, Mark Stone, and Curtis Lazar and was hosted by Ian Mendes. As implied they discussed life on the road, with the session ending with Ceci calling Stone one of the messier players on the road.

I attended the entire event from 9:00-5:00 and have to say the Ottawa Senators organization did a fantastic job in putting together such a large event for the first time when compared to previous Fan Fests. I certainly expect it to be back next season with hopefully bigger and better things to come. It was definitely a great way to kick off the 2014-2015 season. Can't wait for the season to start!