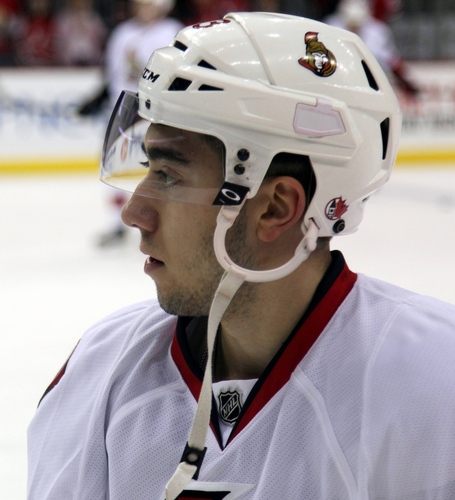 Now that he's 21 years old, Zibby Stardust should expect to play almost a minute more per game than he did last season, with 100% less Matt Kassian.
Photo by Lisa Gansky. Licensed under Creative Commons Attribution-Share Alike 2.0 via Wikimedia Commons

Yesterday I was working on my fantasy picks using Rob Vollman's excellent stat spreadsheets, and I decided I'd try to adjust for the changes in ice time that players see as they develop or decline.

The first thing I looked at was a simple average of time on ice per game of all players of a certain age, from 2008-09 (when the league started to track ice time) until 2013-14. The result didn't end up looking all that meaningful: 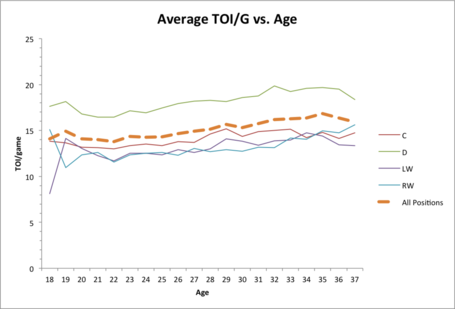 The graph is almost flat right across, with a gradual increase from about 23 years old right up to age 35 (when most players have left the NHL). I don't think this really reflects how players' usage changes; I suspect we're seeing a kind of survivorship bias. I would guess that most players see their peak effectiveness, and presumably therefore their peak ice time, some time in their mid or late twenties. Those ages have the greatest number of NHLers, and a lot of those would be borderline or depth players who are only in the league for those years. Their low TOI would drag down the average in the 23-30 years, even while those few who are in the league at 18 or 35 have their highest ice time.

To test this, I decided to look at how individual players' time on ice changes as they age. For each season listed for one player (after their first), I subtracted the previous season's TOI/G from that season's. This method yielded 3,729 player-seasons of data. The sampling was pretty thin at the extremes of age; there were only 14 player-seasons from 19-year-olds (with 18-year-old seasons to compare to) and very few seasons from players over about 37 years old (as well as exactly one 48-year-old). Nonetheless, I'm pretty happy with the data it yielded. 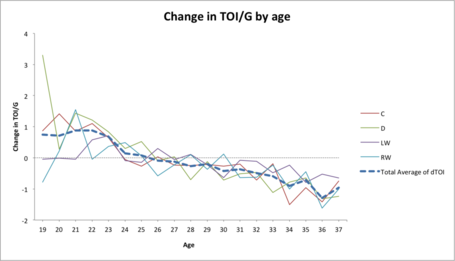 The data from individual positions is a little messy, but I included it mostly to show that defensemen didn't show a notably different pattern. Regardless of position, most players see large increases of almost a minute of ice time until around their 23-year-old season, peak in ice time around 25 or 26 years old, and start to lose ice time in earnest between 28 and 30 years old.

To show this a little more clearly, I created an ice time chart for a "typical" player and adjusted their ice time by the average year-over-year change. I decided that they'd debut at age 18 and play 13 minutes a night in their rookie season; for every subsequent season, I adjusted their ice time by the average change for that age. It's worth noting that this would be a very atypical player - most don't see NHL ice until 21 or so and are out of the league by 32; someone who debuted at 18 and stuck around until 36 would probably be a star and see a lot more ice than your average scrub. Let's see what our imaginary player's ice time looks like over his career: 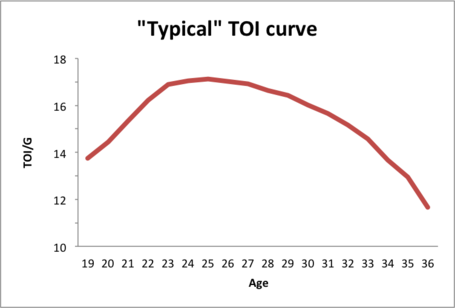 This is a pretty crude calculation and there are some weaknesses you should keep in mind. As Sens fans know well, player usage is determined at least as much by the coach's preferences and the particular makeup of the lineup as it is by a player's age or ability. While position didn't seem to have a major effect, different types of players (and different individuals) almost certainly have different usage curves. A bottom six defensive forward will see different usage from an ageless scoring winger or a journeyman 6th/7th defender. All this projection can hope to be is a baseline estimate of change in TOI (or a crude correction for scoring projections).

A few methodological caveats: this is quick and dirty work in Excel (in case you couldn't tell by the graph formatting). If a player missed a year in the NHL, this would give their change in ice time from two years previous. If there are two players with the same name (or consecutive last names and the same first name), it would jumble their data up somewhat.

For anyone who's interested (or wants to use this for their own projects), I've included the change in TOI chart below the jump. Let me know in the comments if you want to see the pivot tables, have any questions about the data, or want to guess who the 48-year-old wonder was. This is also my first fanpost, so if you have any pointers for me in terms of statistics, writing, or formatting, please share them.