This is the third installment in our Under Pressure series, which explores how four key players will have to step up if the Senators are to be successful this season. Today's article will look at Bobby Ryan and whether he can reach 30 goals again this season.

Bobby Ryan has scored over 30 goals in four of his six full NHL seasons. Last year, he had somewhat of a down year, only producing 23 goals. Senators fans found out later that he had been battling a sports hernia for awhile. In March, his season early and underwent surgery. Now that Ryan is healthy, he'll be looking to regain his scoring touch and will be the Senators go-to guy for offense.

Ryan's also in the last year of his contract. He'll be looking for a raise, either from the Senators or through free-agency, which often pushes players to perform well. I imagine you don't want to read too much more about his contract negotiations though. Instead, I will discuss some of the other factors that could influence whether or not Bobby Ryan can score thirty or more goals again this season.

Bobby Ryan is a sniper, he always has been, and he's pretty good at it. What may be alarming at first glance below, however, is that Ryan's goal and point production have declined over the past three NHL seasons.

It appears as though Bobby may be slipping, but if we do a little bit of searching, we will find that the Anaheim Ducks had an uncharacteristically poor season in 2011-2012, which might have something to do with Ryan's overall point (not necessarily goals) production that year. The following season was shortened and it was rumored that he was unhappy in Anaheim. These two things probably led to some struggles as well. Nonetheless, in both of his "down" seasons in Anaheim, he was still top three in team scoring.

If he was truly unhappy in Anaheim and that affected his scoring, last year should have been a fresh start for him when he was traded to Ottawa. Unfortunately for Bobby, a sports hernia slowed him down and eventually cost him the last 12 games of the year. He ended the season with lower totals than normal. What is important to realize is that Ryan was on pace to match his 2010-11 production, which was his best season to date. After 41 games for Ottawa, Ryan had 35 points (18 goals) before his injury started to really affect him from January on. Below is a breakdown of his statistics per month last season. I've highlighted pre-injury production in green and post-injury production in red.

Possession is important because, in the most basic sense, you can't score if you and your team don't have the puck. Last year, Ryan was weaker in terms of some of his possession numbers. For example, he had poor Relative Corsi (CorsiRel), which "measures the difference in Corsi between a player's on-ice performance and his team's performance when he's on the bench," according to Travis Hughes of Broad Street Hockey. Below is a graph of Ryan's CorsiRel, courtesy of Let's Go Flyers, throughout his NHL career: 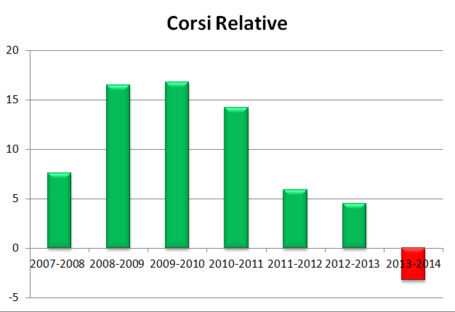 As we can see, his CorsiRel was pretty bad last year and he's been declining for a few years. His two previous years in Anaheim were down by a large margin compared to his first few seasons. The Ducks had an awful year in 2011-2012, so Ryan's possession stats may partially reflect his team's season as no one on the team was spectacular in that department. He still scored 31 goals, so it didn't really hurt his goal scoring. In the following season, no player had a high CorsiRel for the Ducks either, so Ryan's statistics mirror that of his team once again. Finally, although Ryan's possession stats have declined over the past few years, especially last season, other circumstances might also be at play here. This was his first season with the Senators and he had to learn how to play with new linemates, had to learn a new coach's system, and was injured since November.

Why am I going on about Ryan's possession numbers? Well, if Ryan's possession numbers don't improve this season, it could cost Ryan and his line in scoring chances. Luckily for Ryan, however, Clarke MacArthur and Kyle Turris are possession darlings. We can infer then that he benefits from playing with two possession-driving linemates, as they often control the puck in the offensive zone, which in turn leads to chances for Ryan. My colleague Darren also pointed out in the summer that Ryan is an elite shooter, as he has an average shooting percentage of 13.8% over his career. This ties him for 15th in players who have played at least 400 games and have taken at least 600 shots since 2007. That's a pretty impressive stat and essentially means that if MacArthur and Turris can control possession in the offensive zone and get the puck to Ryan, he is going to score pretty frequently.

Ryan's lacklustre possession play didn't have too much of an effect on his line either. Last year's trio of MacArthur-Turris-Ryan generated the more offense than any other line for the Senators. The eye-test showed that MacArthur and Turris complemented Ryan's playing style, as they seemingly gelled on the ice. If you look at Ryan's WOWY (with or without you statistics), Turris and MacArthur did indeed help drive Ryan's production. Combined with Turris and MacArthur, we can probably expect Ryan to pick up where he left off and continue to thrive with these two.

This is probably the most important factor that will influence Ryan's play this season. For those who don't know, a sports hernia generally refers to a severe pain caused from tearing in the groin and pubic area (Diaco, Diaco, & Lockhart, 2005). The pain associated with a sports hernia can eventually lead to the inability to participate in sports. It is a fairly common injury in hockey players because of the twisting and turning movements that players perform in their hip and pelvic regions. For an idea of where the injury occurs and why it's so painful, see below. 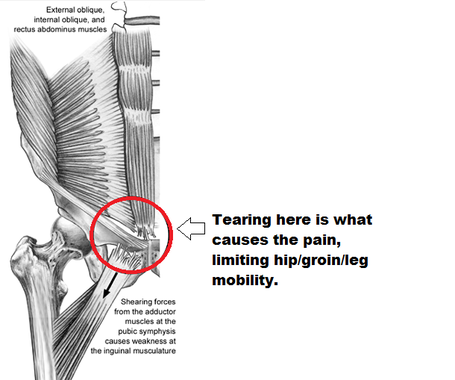 Luckily, however, sports hernias are often fixed by surgery and research has supported this. Diaco et al. (2005) showed that 96% of their sample (92 professional athletes) returned to their pre-injury state. In a more recent and hockey-specific study, Jakoi, O'Neill, Damsgaard, Fehring, and Tom (2013) examined 43 NHL players who had a sports hernia from 2001-2008 and found that 80% of those players returned to action for two or more years. Overall, players with less than seven full seasons return from the surgery and played generally the same as before their injury. Thus, players who haven't played for a long time generally recover better. That is good news for Bobby Ryan who has played in six seasons, or five and a half if you consider the shortened season.

Ryan did say it took longer to heal than doctors told him, but he feels 100% now. As long as he doesn't re-aggravate the injury, he shouldn't be bothered by it anymore. He dealt with it for the majority of last season and still managed to score a respectable amount of points. If he stays healthy this year - and his teammates don't hurt him anymore - Ryan should be back to his normal goal-scoring self.

I've pointed out some of the strikes against Ryan coming into this season, but I've also showed why we shouldn't really worry about these factors either. He has a lot of things going for him this season that can positively influence his goal scoring: (a) he's returning to the team healthy, (b) he's used to Ottawa's style, (c) he has good linemates, and (d) he should have more opportunity and responsibility on the team. Ryan was brought to this team to score goals and he'll probably do just that this season (and kill a couple of penalties, I guess).

Thanks for reading. Don't forget to vote in the poll and tell us what you think in the comments!