Under Pressure: Is this Jared Cowen's last chance?

Under Pressure is a series that will run this week and explore how four key players will have to contribute, in different ways, in order for the Senators to have a successful season. Up first is big Saskatchewan blueliner, Jared Cowen.

Share All sharing options for: Under Pressure: Is this Jared Cowen's last chance?

Jared Cowen is twenty-three years of age and has two full pro seasons under his belt, although he's been out of junior for three years now. Why the gap? Cowen only played 17 games in the lockout shortened year thanks to a lower-body (hip) injury that also went on to plague the 6'5" rearguard last year. Injuries aren't new to Cowen, as you'll see below, but he's fully healthy coming into 2014-15. Given his development and performance throughout his career, is this Cowen's last chance to prove himself as a capable NHL defender?

Hampered by a major knee injury in his shortened draft season, the Senators took a gamble on Cowen with the 9th overall pick. Now, this wasn't as bad as the infamous Brian Lee gamble - Cowen was still ranked as the 9th North American skater by Central Scouting and there were many misses after this pick - but was still a risk on a player who hadn't put up the points or had the two-way capabilities of other CHL defensemen selected in the top 15 from 2006-2009 (draft position in brackets; statistics from hockeydb)

Cowen's draft year points per game rate looks close to Ellerby, Teubert, Myers, and Schenn - none of whom you'd classify as top-four defensemen at this point in their career. Alas, points aren't everything, and Cowen actually has similar NHL points/game rate as some of the other, better defensemen on the list. Their overall performance differs however, and to demonstrate this, I used War On Ice's amazing graph tool to look at this group of players. 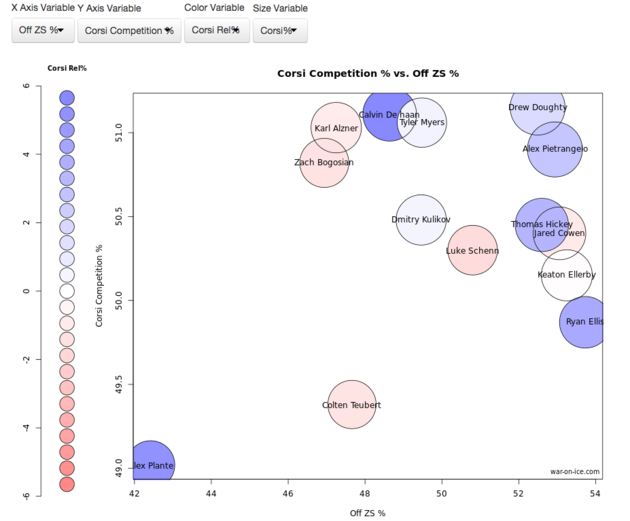 Again, you can see Cowen surrounded by Hickey, Ellerby, and Schenn, facing average minutes in terms of quality of competition (y-axis; using average opponent Corsi or shot attempts), and zone starts (x-axis), but performing at a negative possession rate relative to his team (red bubble). The standouts of this group are either a) playing tougher minutes in both QoC and zone starts like Alzner and Bogosian, or b) facing tougher competition in QoC, similar zone starts, but have fantastic possession numbers like Doughty and Pietrangelo. The point I'm trying to make here is that Cowen doesn't look that great compared to his peer group in a number of metrics, and is unlikely to justify his high draft position.

There's still some hope for Cowen, though. After he recovered from his draft year knee injury, Cowen put up 30 points in 59 games the next year before destroying the WHL in his final year of junior eligibility by putting up 18 goals and 48 points in 58 games, captaining Spokane to a deep playoff run. More impressively, Cowen put up 14 points in 17 games in Spokane's playoff run, before joining the Binghamton Senators in their Calder Cup run - suiting up for 10 games and recording four points, showing a ton of promise. Cowen then played 82 games for Ottawa in the 2011-12 season, finally being healthy for a full year and playing around 14-15 minutes a game in a third pairing role. He showed good mobility, solid awareness in the defensive zone, provided a physical presence, and put up 17 points. Primed for a big year, the NHL had a labour stoppage and Cowen found himself in Binghamton. He wasn't there for long, as he suffered a hip injury in his third game and was out until the end of March. It was clear to those who watched him in the playoffs that Cowen hadn't recovered fully, as his positioning was off, and he had near-zero mobility, which led to a lot of penalties being taken (21 PIM in 10 games).

Cowen's play regressed heavily in 2013-14. Despite 15 points in 68 games, Cowen's spatial awareness was gone, and he was frequently found lost in his own zone. 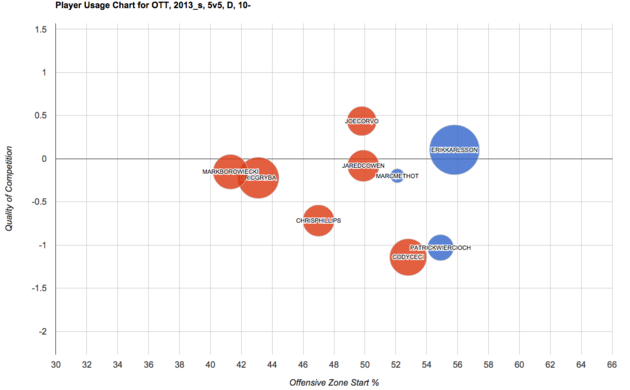 Like many of the Senators defensemen, Cowen put up negative possession numbers relative to the team (red bubble), but did play tougher minutes than his last full pro season, 2011-12. What are some reasons for this performance, and could it have been a result of his hip injury? I mean, we can't excuse Cowen from all responsibility for his poor play due to injury, especially as a lot of his big gaffes look to be a result of hockey IQ and positioning, but some of it can be due to a lack of confidence resulting from decreased performance.

I wish we had a database of NHL injuries so that I could look at performance of players following X injury, but understand that it will never happen. However, Jakoi et al. (2013) looked at the performance of NHL players in the two seasons following sports hernia injuries. I understand that sports hernia injuries are different from hip injuries like the one Cowen had, but players can in fact play through sports hernias to a certain threshold, whereas hip injuries are considered to be more debilitating since your hips are responsible for practically everything related to lower body movement. Anyways, Jakoi and colleagues found that of the 80% of the forty-three players identified as having a sports hernia injury from 2001-2008, went on to have statistically significant decreases in games played, goals, assists, and average time on ice in the following two seasons. The authors state that less veteran players (under 7 years of experience) were more likely to return to play at a level similar to past performance quicker than their older counterparts - which is good news for Cowen if we can extrapolate these results to apply to hip injuries.

Now, for 2014-15, Cowen's hip should be darn close to fully recovered, and thus, the start of this year should be a big indicator of where his game is at. With last season's performance in the past, Cowen should come into camp with renewed confidence, as clearly the organization still believes in him if they gave him a 4 year, $12.4M deal coming off his surgery, and hopefully the increased mobility will limit his defensive gaffes. I don't expect Cowen to ever live up to his high draft position and potential as a "shutdown two-way defender", given his point totals in junior weren't outstanding and we haven't seen any evidence that he can play tough minutes in the NHL yet, but I will be happy if he can be more than just "big". Cowen played at the level of a #5 defensemen in 2011-12, and should still have a reasonable chance to be a second-pair defender given his age (entering his prime) and development stage as a defenseman, who usually take longer to develop. If there's a repeat of last year, expect Cowen's stock to fall even further and the Senators to have trouble dealing a fringe NHL player with a $3.1M cap hit. With replacements like Fredrik Claesson and Mikael Wikstrand, who's averaging 21:37 minutes a night against men in the SHL, presumably ready for 2015-16, Cowen could easily find himself subtracted from the blueline if he doesn't step up, and is under pressure to deliver this season.