An Ottawa Senators Playlist: Theme Songs for Some of Your Favourite Players

Time for a little bit of fun after a somewhat tumultuous week for Senators fans.

Share All sharing options for: An Ottawa Senators Playlist: Theme Songs for Some of Your Favourite Players

Last weekend at my softball playoffs, my team was joking around about what each player's theme song should be when we stepped up to bat. That conversation got me thinking about what some of our beloved Senators players' theme songs could be if they score. This is what I came up with and why I think these songs suit each player. For your enjoyment and personal comfort, each song is linked to YouTube. Please feel free to add your own Senators theme songs in the comments section. Enjoy!

This song was released by Tina Turner in 1989, the year before Karlsson was born. I'd be willing to put money on it that this song was playing in Landsbro during the time that Karlsson was conceived. As an alternative (and less graphic) theory, we could speculate that Tina sang this song about Erik, even before he was born, because he's that good. You could even say he's "Simply the best, better than all the rest."

Methot can move his booty better than Nicki Minaj on a swinging bridge (sorry for that image). He has the hips of a powerful ballet dancer and the strength of 10,000 oxen. He uses these powers to throw puny opponents around, like Sidney Crosby, by simply bending over. Yes, Mr. Methot, "Shake it, shake it, shake that healthy butt." 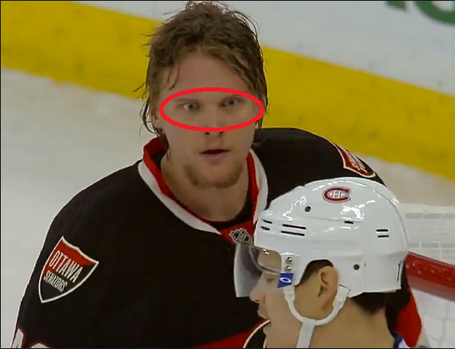 "What are we having for dinner tonight, Robin?" "Rene Bourque chops."

Theme Song: Hate To Say I Told You So - The Hives

MacArthur signed with the Senators last year and ripped it up for the team. How could anyone think this guy wasn't worthy of being on their team? Right, the Leafs. Yes, the Toronto Maple Leafs mismanaged a player and we reaped the benefits. Clarke had something to prove and he did. All that needs to happen now is for Clarke to sit on a throne -  hairless cat in one hand, stack of cash in the other - and giggle delightedly as he watches Clarkson score a whopping 11 points again this year.

Let's all hope that Craig Anderson never makes a career change and auditions for Masterchef.

Kyle Turris might be skinny on the outside, but he's not on the inside. Yes, Kyle Turris is an eating machine, but he's also possession-driving, two-way playing machine. Since his arrival in Ottawa, he's become a fan favourite for his dedication to finishing both large steaks and PK Subban's playoff dreams in 2013. He's done so well here that he's now become the number one centre on the ice and in our hearts. So what song represents Turris? Obviously Springsteen's "Hungry Heart" because the title can be seen as an illustration of Kyle's insatiable appetite for both personal betterment and cheesecake. #BigBootyPoppin

Poor Patty didn't get much of a chance last year to play, as he was in and out of the press-box for seemingly no apparent reason other than his name is hard to pronounce. This year, he'll be looking to get into the lineup on a more regular basis to prove the haters wrong. Now, I know you're all thinking, "Mrs. O, Centrefield is about baseball." I'm aware, but you can't deny that Wiercioch probably serenades MacLean with the words, "Put me in Coach, I'm ready to play," before every game only to be sent back into exile.

Old (get it?) faithful Phillips has played every one of his NHL games with the Ottawa Senators and he's here for a few more years. He's a mentor for the young players and a respected veteran around the league, which points directly to his good moral character. I don't think Philly will ever break the hearts of Senators fans (see below for details). Therefore, the truly endearing love song by the Backstreet Boys is an absolutely suitable ballad that describes Phillips. I can almost picture the Big Rig in his previous contract negotiations singing the words, "I'd rather die than live without you, I'll give you all of me, Honey, that's no lie," to Bryan Murray. I'm tearing up as we speak.

AND just because I like to rub salt in the wounds of fellow Sens fans...

Theme Song: All My Ex's Live in Texas - George Strait

Jason Spezza divorced us this summer. Jason Spezza plays in Dallas now. Dallas is in Texas. George Strait's title says it all (especially since Hemsky and Gonchar are also there).

When you read between the lines, you can't help but wonder if Adele knew Alfie was going to leave us.

I heard that you're settled down
That you found a girl (Detroit) and you're married now.
I heard that your dreams came true (You made the first round of the playoffs).
Guess she gave you things I didn't give to you (an expensive contract).

Never mind, I'll find someone like you (supposedly Curtis Lazar)
I wish nothing but the best for you too (As long as you retire soon)
Don't forget me, I beg (We're still not over the break-up)
I'll remember you said,
"Sometimes it lasts in love but sometimes it hurts instead" (take this literally).

Pretty sure Melnyk wrote the chorus for this song, "I'm gonna pop some tags, only got $20 in my pocket, I-I'm hunting, looking for a come-up, this is f**king awesome." For those of you who don't know what a "come-up" is, Urban Dictionary defines it as, "A bargain or a found item that is of value to the finder." That's why we signed Joe Corvo last year. Things are becoming a lot more clear now, aren't they? Cost per point for the win.

I hope you've enjoyed the (possibly painful) adventure that I've taken you on. Once again, if you have some theme songs you think would work, please share in the comments.