I was fortunate enough to attend Ottawa's annual prospect development camp this past weekend. This is the first in a series of four 1-on-1 interviews with Sens prospects.

Ottawa held its annual prospect camp from July 1-7. The organization invited writers from around the Sens blogosphere to attend on-ice workouts and scrimmages. In addition, we were granted media access to players. The first player I talked to was Senators defenseman Cody Ceci.

Amelia L: You made the jump to the NHL after half a season of pro hockey in the AHL. What was the biggest surprise about life in the NHL?

Cody Ceci: It was a lot different. A lot older guys on the team, a lot more veteran guys and it's just a lot bigger, stronger guys. I know everyone says that, but that's the way it is and you've got to get used to playing against men.

Amelia L: What was it like playing under Luke Richardson, a veteran NHLer during your time in Binghamton?

Cody Ceci: It was great to have a guy around like that all the time and just teach me little things every now and then. He played a ton of games as a defenseman in the NHL so he's a guy that you definitely look up to and learn a lot from.

Amelia L: You were paired with Chris Phillips in Ottawa this season. He's a veteran defenseman who brings a lot of experience to the pairing. How did he help you transition to the NHL?

Cody Ceci: He helped me out a lot. Between him and Luke there's a ton of games played there. So they're both great veteran guys as well who are both willing to teach you and I try to be as open as I can to everything they teach me. I learned a ton from those guys and they really helped me out this past season.

Cody Ceci: Not much. Luke was great with all of us and it's almost like he still wanted to be out there playing with us, that's the way he was and Philly, he's still playing. They both played the game at similar times and for similar lengths so they know what's up and I was lucky enough to have both of them in one season. 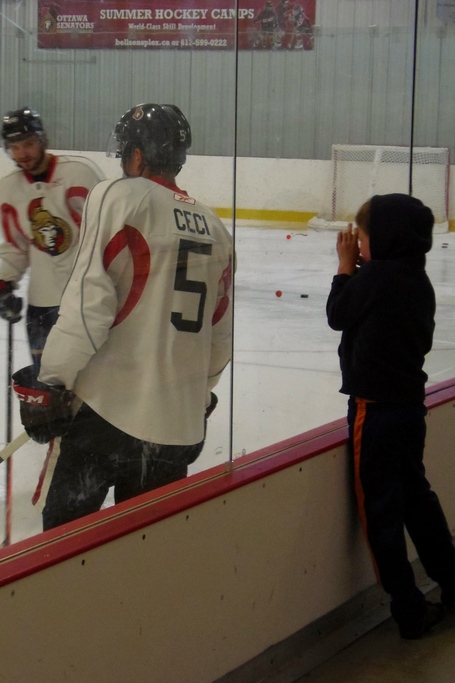 You should have seen the through-the-glass high-five.