Let's take a look at how the Senators broke out of their own zone...when it worked.

Welcome to the first installment of the Silver Seven Sens' Tactical Formation Series. Over the course of the coming weeks, we'll touch on breakouts, dump-ins, power play and penalty kill tactics. Think of these as a refresher, or introduction, to some of the finer points of how the game is played. These are also the areas in which coaches can have some of the biggest impacts on how their teams perform. Smart coaching staffs will tailor their playbook to suit their players' strengths, so no two teams will deploy the same tactics. Nonetheless, there are broad strokes that most every system will have in common.

Today's piece takes a look at the breakout: what does a good breakout look like? Mostly, it looks like the puck getting out of your end in a hurry, with possession, but good teams will have a few standard breakout plays at their disposal and a trick play or two to spring an odd man rush against a team that's not paying attention. I'll set trick plays aside for the purpose of this writing, and instead focus on what happens during a "regular" breakout. I've also chosen to work almost exclusively with the immediate situation that occurs following a defensive zone face-off win as that is the point in time most ripe for a structured, set play. Your team has the puck, everyone has an agreed upon role - now you just need to execute.

The Wheel is the most commonly utilized breakout at virtually every level of hockey. The basic gist of it is: defensive team sets up in standard face-off position, with one defenseman on the boards, two wingers and the other defenseman lined up on the inside hash marks. If the centre wins the puck backwards, the D from the inside hash mark will grab the puck and move it to the far side boards where the appropriate winger will be waiting. The centre then curls towards the winger to offer an option for exiting the zone, while the now far side winger takes flight up ice. It looks roughly something like this in the two seconds after the draw is won: 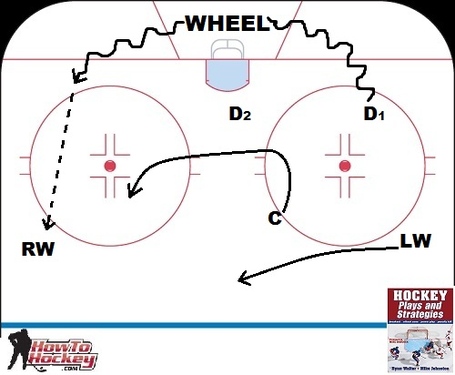 I'd like to pause here for a second to recognize How to Hockey's great website that has a whole series of wonderful whiteboard images. Please visit the site as I wouldn't have been able to generate the whiteboard image nearly as well myself.

So, what would that look like when the Senators run it? Glad you asked!

First, we have the standard defensive zone alignment seconds after the puck is dropped: 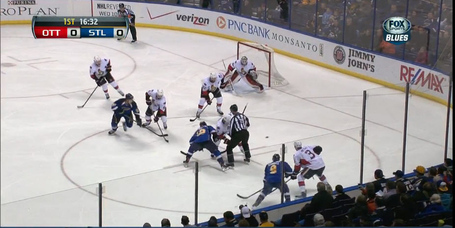 Notice Clarke MacArthur and Bobby Ryan assessing their next steps: if the draw was lost here, they would have very different assignments. Instead, the puck is won cleanly so Ryan is going to hurry over to the side boards and wait for Gryba to get him the puck. MacArthur is essentially going to clear space by moving towards his wing and Turris will curl to Ryan.

Clarke MacArthur is peaking over his shoulder to make sure Ottawa has clean possession as what he does next depends entirely on this being the case. Next, Gryba will get the puck to Ryan while Turris and MacArthur position themselves as two possible targets for a pass: 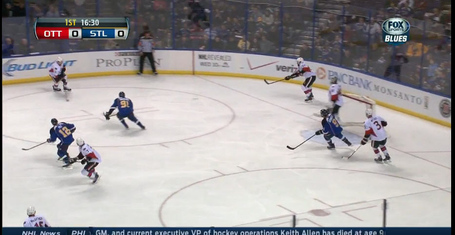 Even though Gryba makes a flat pass here, a very necessary ingredient for a good breakout, St. Louis has sniffed the play out and their centre is closing down Ryan while making it difficult for Turris to support the puck. Meanwhile, MacArthur stays in his lane and presents himself as a secondary option. The result is a tricky saucer pass that Ryan can't quite complete cleanly to Turris:

This is a textbook Wheel breakout that's been virtually perfectly defended by the Blues. Look at the gap control from their D: it's immaculate. Nonetheless, the Sens went from a defensive zone draw to attacking through the neutral zone in less than 5 seconds. Not perfect, but still a well-executed breakout.

The basic tenet of the Wheel is that the defenseman coming off the boards after a defensive zone draw win will get the puck to the winger on the far side. After that, what everyone else does is up to the coach and the situation. A fun modification of the Wheel that the Senators ran on occasion this past season was to send the second winger all the way through the middle of the ice to drag a defender, and subsequently free up more space in the middle for the centre.

The below sequence is a neat little adjustment by the Turris line from the same game, just five minutes later.  Let's take it from right after the draw is won. All of the same things that happened in the first instance are taking place again: the defender is going behind the net and Bobby Ryan is breaking towards the boards to open up for a pass. Clarke MacArthur is again looking behind to make sure the Senators have clear control before deciding what to do next: 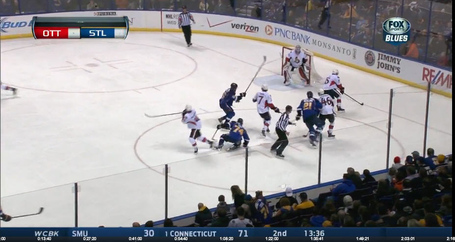 All looks the same, so far right? The cool little wrinkle comes in the next screen: look at how instead of staying in his lane, this time MacArthur drives through the middle of the ice all the way over to Ryan's side of the ice, ahead of Turris: 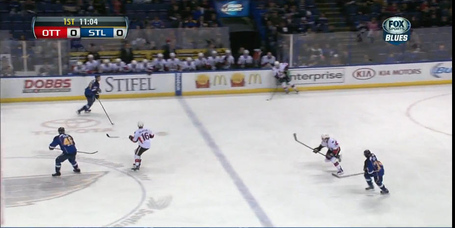 The effect is to draw the defenseman on his side, Roman Polak, towards the middle of the ice, opening up a lane for Turris. T.J Oshie's right on Turris to create back pressure, but Mac's burst through the middle has blown up the Blues defense's gap control. In the next screen you see the result: 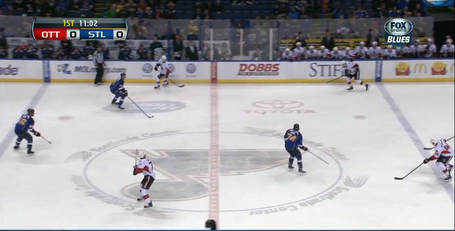 Et voilà! MacArthur backs up the defense enough to free Turris for a cross-ice pass. The Sens go from a defensive zone draw to attacking with control in five seconds flat. The modification is a small wrinkle, and exactly the kind of thing that smart teams will mix in to keep the opponent honest.

Tyler Dellow of @mc79hockey fame also had a great post on the subject of the Oilers and their breakout tactics that I highly recommend. In it, he touches on the more unconventional route of sending the puck back up the boards on the same side of the defensive zone draw. It's a tactic that can be high risk, high reward, though probably mostly just high risk. Still, if you catch the other team napping and are able to spring a forward behind the defense on occasion, it's probably something worth at least exploring as a tactical option. As it turns out, this particular set play did not work very well for the Oil this past season as they rarely exited their zone with control.

And that's the key point here: the main goal of the breakout is to get the puck out of the defensive end with control. The framework of the standard wheel breakout is simple, but to keep exiting your end and attacking with speed you`ll need to add the occasional wrinkle.

Hope you enjoyed Part 1 of this series; I look forward to comments and feedback, and thanks for reading!