The Making of Ottawa Senators Fans: The Boschman Tractor Beam

The fourth in our summer series looking at the reasons behind why some of the Silver Seven staff became Sens fans.

Share All sharing options for: The Making of Ottawa Senators Fans: The Boschman Tractor Beam

"Sports have become so desentimentalized that it's hard to believe anyone can even root for the same team from one year to the next. Neither players nor owners seem to acknowledge the fans' loyalty, much less repay it. And yet every time you walk into a ballpark or flip on ESPN, there seem to be more and more superfans, megafans, uberfans; fans who yell louder, dress louder, spend more, suffer more, exult more and even seem to care more."

I've often pondered the great and mystic dilemma of cheering for a sports team. Sure - we may have an allegiance to our home town, or to a player who grew up on a farm near your uncle - but what invisible force really makes us root for the New York Yankees? Or the Dallas Cowboys? Or the Chicago Bulls or...in my case...the Ottawa Senators?

Being someone who is highly interpersonal and who loves the art of conversation, I've always been drawn to people. I love people. When I cyber-stroll over to IMBD to see what movies are coming out, I will often give a trailer preference if there is an actor that I like in the credits. Being a music writer, I've also given ear-time to songwriters who I know are smart and interesting, and who interview well.

For hockey, and as a Nepean boy at the green age of 14, my person of interest was always Mike Modano. My brother had an old Minnesota North Stars hat in our front closet, and one day, I decided to make that team (and hat) my own. The year I decided to cheer for Minnesota also happened to be the year they would underdog their way into the Stanley Cup finals against the Pittsburgh Penguins (only to get completely shredded by Lemieux and Jagr). But my love for Modano did not wane, and within two years, Ottawa was going to get its own NHL team. For me, this wasn't a chance to change allegiances; it was a chance to see Master Modano in action.

Obviously, in the Sens inaugural year, Minnesota had recently relocated to Dallas, but that geographical game of musical chairs didn't phase me - I was still sold on Modano, Rusty Courtnall and Jon Casey. They were my boys. As luck would have it, my dad procured some tickets and I was finally able see them play in the mighty Civic Centre, and I was mesmerized. What I'd seen Modano do with the puck on television seemed even faster and smoother in real life - and amazingly enough, Dallas came back from a 5-1 deficit to win the game 6-5. I was in heaven. 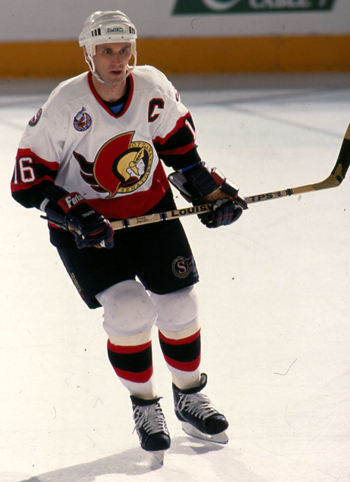 The 33-year-old gritty captain became friends with my family in that first year (at the end of which he retired). Down the road, my dad told me that Boschman would be getting an office just down the hall from his accounting office, and I jumped at the chance to pick the brain of a Modano-ice-time-sharer. I saw Boschman as my gateway to questions about Modano, and I'm sure that at many times, he rolled his eyes after our visits and muttered to himself 'easy on the man-crush, there Matty'. But 'Bosch' and I got along well from the word go, and no matter how busy he was, he always had time to take questions from my young and inquiring statistical mind.

As time passed, I felt my ties to Dallas waning, and although Boschman's time on the Sens squad was short, I started becoming interested in other Sens players. Working closely with the Senators organization, Bosch knew a lot of the players and he would offer his wise and balanced insight into their various playing styles and personalities when I asked. He also showed me the best grip to have on someone's jersey in a fight (and Laurie, of all people, would know).

Over the years, he has celebrated and winced alongside me as the Sens have gone though their share of battles. Yashin. Alfie. Spezza (yeesh). He's been there through all of it, and we have exchanged both hilarious and gut-wrenching texts through the tumult of the RABHA (Red And Black Heart Attack).

Oddly enough, Bosch's first and final year in Ottawa was not an easy one for him, but I am glad he chose to make this city his home. Even though my hockey-experience only amounts to playing pick-up in a church league for about three years, I have never felt belittled or brushed off when I asked this powerful NHL player a question about anything. He is a kind man - and he is a man of stature and wisdom, and has one of the best laughs you'll ever hear. In more ways than I can count, Laurie Boschman is a major reason as to why I started giving a damn about the Ottawa Senators.