Projecting Senators Goals, Points and Wins for the Coming Season

Share All sharing options for: Projecting Senators Goals, Points and Wins for the Coming Season

As currently constructed the Ottawa Senators appear ready for another season on the outside looking in when the playoffs start next spring. Not surprisingly the Senators have lost Daniel Alfredsson and Jason Spezza each of the past two summers and are trending downward. 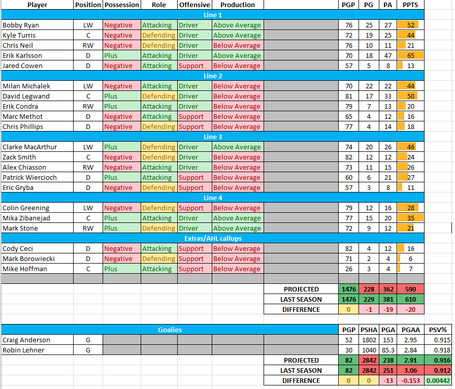 Of those 12 teams 10 of them were a seventh seed or less in their respective conferences. None of these 12 teams made it past the first round of the post season.

Last season the Ottawa Senators managed a negative 22 goal differential which helped them to finish well outside of the playoff picture.

The projections were based on the past three seasons of a player's career with a translation factor added to points accumulated below the NHL level. This chart also includes the NHL Player Type Calculator score from Mike's Mumbles.

How many games will they win?

At 80 points they would have finished in 25th place this past season, which would give them a great chance of picking in the top five of the NHL Draft. With the 2015 Draft being notarized for the top end talents of Connor McDavid and Jack Eichel the Senators would do well to ensure they are not stuck in the middle next season.

If the goal is to "tank" next season in an effort for a top draft pick no changes should be made to the current team. Without any changes the likes of Chris Phillips, David Legwand and Craig Anderson could be shipped off at the trade deadline to further the cause.

What are the glaring weaknesses?

Both their goals for and goals against would place them in and around 20th to 25th in the league which clearly is not good enough for a significant improvement this year.

Unfortunately for Ottawa Senators fans it could be another long season in the Nation’s Capital. Although the light at the end of the tunnel in the potentially generational talents of Connor McDavid and Jack Eichel being selected at the 2015 NHL Draft may be enough to keep fans on the bandwagon.