A comparison of scouting departments across the league and initial conclusions

Two years ago I wrote about scouting departments across the league.  It was a cursory study, but it revealed some interesting trends. With support for statistical analysis gaining steam in NHL hockey operations departments, it seemed like an appropriate time to revisit the topic.

I've tried to keep things consistent with the survey from 2012. It's not that there weren't flaws in that research - there were - but part of my interest in revisiting this topic is a comparison to the previous numbers, which is harder to do if I make significant changes. That said I have made some alterations. There is no standard definition for scouting roles and teams list scouting personnel in a variety of ways (or not at all!) on team sites. In 2012 I used the categories "Head" "Pro" "Euro" and "Amateur". This time, I've broken some of those categories down further into more concrete roles while adding an "Analytics" category in hopes of increasing the specificity of my survey.

it comes down to thinking critically and spending the money necessary for excellence.

This post is in no way comprehensive. I used information readily available on team websites, directories, and media guides. I made a choice not to consult teams directly for two reasons: I didn't in my previous post and I think there's something telling in what teams are willing to admit about scouting positions. Scouting is rarely a discrete field in the NHL. I'm sure many who are listed as assistant hockey operations or video coaches contribute to scouting departments. Some are listed simply as scouts others as assistants. Significantly, those contributions are hard to define and even harder to quantify. But I'll try. I've tried to be as accurate as possible but if you have additional information about a specific scouting department, please let me know in the comments.

On the smallest scouting departments in the NHL:

The threadbare scouting departments of the Islanders and Blue Jackets are particularly disturbing. The Islanders have picked in the top-5 in each of the last 4 drafts. They have picked in the top-10 in 6 of the last 7 drafts. In 2009 and 2010 the Isles had 2 first-round picks. In short, this is an organization that has clearly been rebuilding for several years and relying on the draft to improve their team, yet has failed to develop their scouting department over that same time. With the exception of the season the Blue Jackets made the playoffs (2009), Columbus has picked in the top-10 of the NHL Draft every season of its existence (the Jackets traded their 8th overall pick to the Flyers in 2011 as part of the Jeff Carter trade). Yet despite this drafting advantage, the Blue Jackets have failed to develop a scouting advantage, and as such, will probably continue to enjoy their drafting advantage.

Sometimes quantity helps produce quality. Toronto leads the pack with 23 scouts under contract. While Brian Burke's rebuild has been met with mixed reviews, he has spent a lot of time, energy, and money revamping Toronto's hockey operations. As a result, the Leafs employ 4 pro scouts, among the most in the NHL, and a whopping 18 amateur scouts, including 5 based in Europe. The Marlies Calder Cup Finals appearance this spring was the fruit of Dave Morrison and his scouting department's labour. Toronto and Vancouver are examples of big-market clubs using their financial clout to build their hockey operations.

On the role of advanced statistics:

For those who don't think advanced statistics play a significant role in the game, examining scouting departments suggests otherwise. While advanced statistics fans like Canucks GM Mike Gillis don't employ anyone who holds a statistics or analytics title within the team, 4 NHL clubs currently do. Graham Beamish is the Hockey Analytics Assistant for the Sabres, Adam Gill is the Hockey Analytics/Video Analyst for the Blackhawks, Mark Janko is the Director of Hockey Analytics and Administration for the Stars and Michael Peterson is the Statistical Analyst for the Lightning. Positions within NHL organizations are always changing. Just as position-specific coaching is a relatively recent development (goaltending coaches are one such example), statistical analysts are a new development in scouting. And just as goalie coaches now proliferate the league, in a few years so might statistical analysts. This kind of diversity is good for an organization as it increases the perspectives a GM can draw on when making a decision. 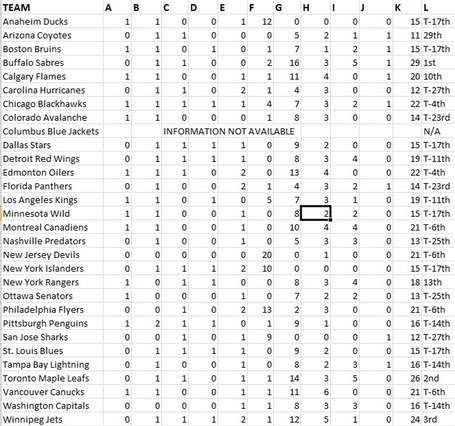 *Unfortunately, information on the Blue Jackets scouting staff was unavailable. The relevant page on the team's website featured a system error.

*UPDATE: Chart with Columbus information. Thanks to @6thSens for the correct information: 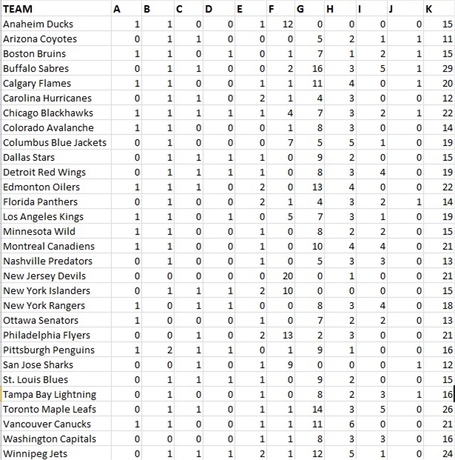 Scouting Departments are growing. Two years ago, NHL teams employed an average of 14.8 scouts. In 2014 that has increased to 17.6 scouts on average. In 2012 there were two teams in the single-digits (the Hurricanes and the Islanders both had 9 scouts). Today all teams are in the double-digits (Arizona has a league-worst 11 scouts).  In the previous survey, three teams (New Jersey, Toronto, and Vancouver) had 20 or more scouts; today, that number has risen to 10 (Buffalo, Calgary, Chicago, Edmonton, Montreal, New Jersey, Philadelphia, Toronto, Vancouver, and Winnipeg). In addition, Los Angeles and Detroit are on the cusp of joining this group with 19 scouts each. Some of these numbers seem inflated. St. Louis, for instance, augments its scouting department with part time scouts. Six of the 15 scouts, or 40 percent, are employed part time by the team. Yet these contributions should not be discounted or dismissed; while these scouts do not have the output of full time staff, they create a more diverse pool of information for Doug Armstrong. 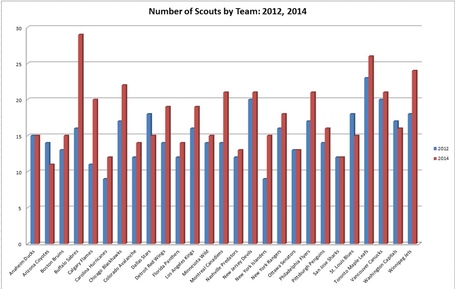 The analytics movement has taken hold. I was pretty strict in my definition of an analytics scout. I did not include analytics supporting assistant GMs or teams who hire outside firms to do the work. This should be considered a conservative estimate and it's still very telling. Two years ago, four NHL teams employed a scout designated by a statistics or analytics title (Buffalo, Chicago, Dallas, and Tampa Bay). In two years that number has doubled to eight (Arizona, Boston, Buffalo, Calgary, Chicago, Florida, San Jose, and Tampa Bay). I don't think Dallas has dropped out of the analytics game. Teams can't undo going through the analytics looking glass. I think they've simply hidden

their statistical analysis behind titles like "hockey operations" or more generally "scout". Furthermore, I don't think the Stars are the only team doing this. As more and more teams adopt an analytics approach I suspect even more work will be done behind the scenes and more developments will take place under the umbrella of proprietary research. The kinds of teams that have joined the movement aren't really surprising either. There's rich, smart teams (Boston, Buffalo, Chicago, Tampa). There's smart, poor teams (San Jose). Finally, there's poor teams trying to gain a competitive advantage (Arizona, Florida).

Teams lacking in financial resources are still struggling to compete in scouting and the standings. In 2012, the teams with the smallest scouting departments (Carolina, New York Islanders, Columbus, and Calgary) all missed the playoffs. The story was similar in 2014 with four (Arizona, Carolina, Ottawa, Nashville) of the five teams with the smallest scouting departments missing the playoffs. Only the San Jose Sharks (tied for 27th in terms of size)

managed to reach the postseason. This is not to suggest that limitations in each team's scouting department is the reason these franchises missed the playoffs. There are multiple reasons these teams failed. However, the smaller the staff the more difficult it is to obtain the necessary information to stay competitive. Opposition research, trades, free agency, drafting, and development are all impacted by a team's scouting department. Teams that cannot afford quality, robust scouting departments are starting the process of making a Cup contender shorthanded.

Sometimes scouting departments reflect changes in management. Sometimes they don't. Calgary has almost doubled its scouting department and the increase coincides with the arrival of Brian Burke. Under Burke, Toronto had one of the largest scouting departments; under his leadership Calgary has vaulted into the top third in the league. However, this could also be the result of teams that were in transition at the time of his arrival. The Sabres have also dramatically increased the number of scouts the team employs.  In January, they hired the forward-thinking, analytics-versed, Tim Murray as the new GM. However, many of these additions were made prior to Murray's hiring. While Murray is beginning to bring in his own people, Buffalo has been open to experimenting with its scouting department for some time. Perhaps that's one of the reasons the new GM and team seem to be such a good fit.

Amateur scouting is where the big spenders spend their money. Looking at a breakdown of the Buffalo scouting department and it's clear that the focus is on scouting prospects. This isn't surprising given that the franchise is rebuilding and has been stockpiling draft picks and prospects. 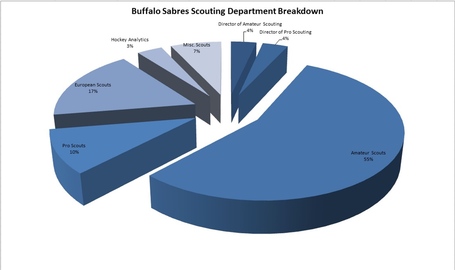 The same is generally true of the other Top 5 scouting departments by size. With the exception of Chicago, these teams (Buffalo, Toronto, Winnipeg, and Edmonton) put a disproportionate amount of resources into amateur scouting. Chicago's totals seem low, but the team's four scouts categorized as "Misc." have at least some amateur scouting focus. Chicago has a Director of Player Recruitment, probably to attract college free agents (although may also do work concerning NHL UFAs). Overall, this suggests that scouting in the NHL is first and foremost about development.

Spending makes a difference. Buffalo is able to outspend Ottawa in every way and it makes a difference in every category. Ottawa only has an advantage in two categories: Director of Player Personnel (Pierre Dorion) and Director of Player Development (Randy Lee).  When Tim Murray left the organization to join the Sabres in January, he wasn't replaced. Dorion and Lee simply picked up the younger Murray's NHL and AHL duties. With Bryan Murray focused on cancer treatment, Dorion and Lee are covering some of the elder Murray's portfolio as well. While Bryan Murray may return to full time duty in the coming months, an organization with greater financial resources would have surely replaced Tim months ago or promoted one of or both of Dorion and Lee and found replacements to cover their previous responsibilities.

It's an interesting process but the overall picture is tantalizingly incomplete. It would be great to have more detailed information. There are no guarantees that larger staffs produce better results. Toronto has had a large scouting staff for years and is still struggling to breakthrough into contender status (that might change soon though). Proficient organizations like the San Jose Sharks prove you can do a lot with a little if you hire the right people. Something I didn't touch on in this piece is the staggering amount of former NHLers or former fringe NHLers in scouting departments across the league. Doubtless many are hardworking scouts who are good at their jobs. But some are surely filler, a variation of a team alumni association (see the Edmonton Oilers). Like other advances in hockey methodology, it comes down to thinking critically and spending the money necessary for excellence. Ultimately, the possibility to create sophisticated proprietary information that takes the next step in the analytics movement is more likely with greater financial investment.