Tactical Formations: The Dump and Chase

The last of four articles examining some of the most frequently used and important tactical formations found in hockey. This one explores the dump and chase and its pros and cons.

Share All sharing options for: Tactical Formations: The Dump and Chase

This is the last of the four installments of the Silver Seven's Tactical Formation Series. Over the past two weeks, we have looked at breakouts and both power play and penalty kill tactics. Today's feature will focus on the dump and chase, also known as the chip and chase.

One of the first things minor hockey coaches teach their young athletes is the dump and chase. It's one of the simplest plays in hockey for them to learn and it's also a way to help teach them about changing "on-the-fly". It's one of the most comonly used tactics in all levels of hockey to advance the puck in the opponent's end. In it's most basic form, a dump and chase consists of a player advancing over centre ice and shooting the puck into the opponent's end while the forwards race around the defenders to regain possession deep behind enemy lines. The set-up for a dump and chase typically looks something like this: 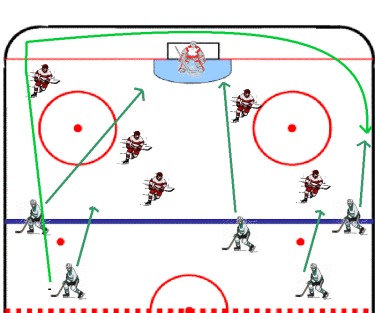 From the visual, you can see that it is the left defender dumping the puck in and the right wing as the one who will fight for the possession with the left wing and centreman going hard to the net for a pass or rebound, dependent upon where the winger regains possession and how much time and space he has. This is a perfect scenario; however, most of the time, the forward who will be getting the puck off the dump-in will be the one closest to the puck (if you've ever seen coaching diagrams, the player is often labelled F1). The opposition's defense also have a tendency of wanting the puck too, so you have to fend them off or pressure them to make a mistake.

When is a Dump and Chase Appropriate?

Obviously, the main argument against the dump and chase is the loss of possession. Regardless, there are times when the dump and chase is suitable. I'll give you an example. If you're a strong skater but don't have the best stick handling skills, the dump and chase is built for you. If your defender is slower than you or doesn't have the reach of Zdeno Chara, you should be able to chip the puck past the defenseman and win the footrace yourself to regain possession. You wouldn't want to use this against a defenseman like Erik Karlsson or Brian Campbell though because of their skating unless you're certain that you can trap them or that you have a step on them.

It's also appropriate to use a dump and chase method if you notice that defensemen are cheating to your side or that you can't beat them with speed and you see your teammate has the best chance to regain possession like in this picture:

As you can see, F1 appears to have attracted both defenders to his side, which has left a big opening for an opposite-ice dump for F2 to barrel down on. The risk with this play is that if you have a defender who blocks well or has a good stick, he can intercept the dump-in; therefore, when creating a play like this, you have to dump the puck in relatively hard and preferably with a bit of height to it like you're given a saucer pass.

Another time when a dump-and-chase is useful is when forwards are relatively close and charging in across the blue line like in this situation: 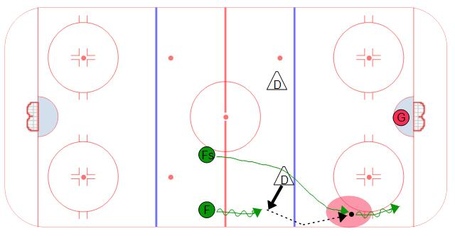 In this play, you're not looking to dump the puck in hard, but rather chip it past the defense so your supporting forward can win the footrace to the puck. Once again, you need to ensure that you're forechecking hard so the defense can't turn around and beat you to the puck.

If your team has strong forecheckers, the dump and chase has the potential of being a lethal weapon. Players such as Jonathan Toews and David Backes are known to be strong forecheckers because of their defensive abilities in the offensive zone. This skill ultimately helps them to create turnovers and plays for their own teams. Essentially, forechecking is playing defensively in the offensive zone in order to pressure the opponent and regain possession. Thus, good forecheckers tend to be good two-way players.

Forechecking usually involves what you might know as "digging" and "going to the dirty areas". A good forechecker is able to win a footrace to the puck, hit the opponent so as to knock the puck lose, pick the opponents pocket with his stick, and/or take away the opponent's decision making time by skating hard at him so the defender is forced to make a blind play or turnover the puck.  From my experience, a good forechecker is strong (not necessarily big) and a good skater. The faster a player rushes the defenseman, the more likely that the defenseman will make an error. Pressure, pressure, pressure is the name of the game when you're dumping and chasing.

The first picture below is a good example of smart forechecking. The Rangers player rushes the goaltender and blocks one side so he's only limited to shooting it on his backhand. This results in the goaltender misplaying the puck and passing it directly to the Ranger winger (seen in the second frame), which is exactly what you'd want to happen. The end result was the winger passing it to the centreman in the slot, who then scored. 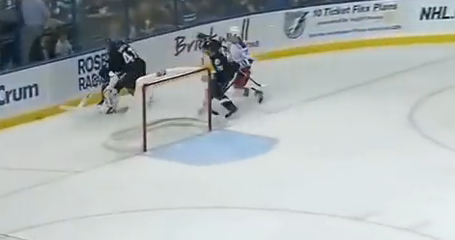 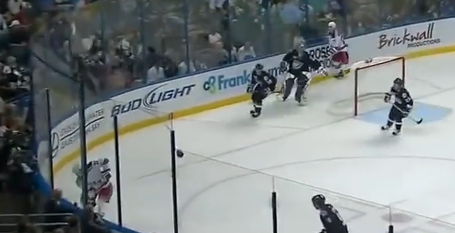 The Drawbacks of the Dump and Chase

There is an obvious trend towards playing possession-type hockey where zone entry is controlled instead of giving the puck away temporarily. Here's what I mean by a controlled entry: 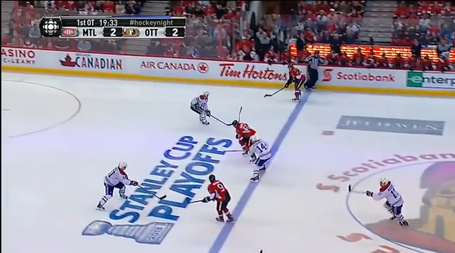 As you can tell, Alfredsson carried the puck into Montreal's zone by himself because he had some space and didn't need to dish the puck away. The rest of the play involved him getting a quick shot off with the wingers waiting nearby for the rebound.

Losing possession on a dump-and-chase play can be very problematic if you're playing an offensive system where players can get caught. For example, if you send two players deep (past the hashmarks) and one to the net and you lose possession, the opponent gets the chance for an odd-man rush going the other way because the forwards are caught out of the play once the opponent breaks out.

Furthermore, when you lose possession on a dump-in, it's a little more challenging to set up your offensive zone attack for a couple of reasons. First, how the play will unfold is more unpredictable than a controlled entry because you don't know how the opponent will react and where exactly you'll regain possession. Second, controlling possession affords you more time because you're not frantically trying to get the puck back. If a skilled stick-handler enters the zone and has the ability to fend off the opponent, the forwards and defense can set up easier.

Finally, statistics have been used to show the difference between controlled zone entry (i.e., carrying the puck) versus an uncontrolled zone entry (i.e., dump-ins). For example, some have tracked the probability (see graph below) of getting a shot off when using both zone-entry methods. From the graph, we can see that keeping possession gives you a better chance of generating a shot. Typically, those are pretty important if you want to score. 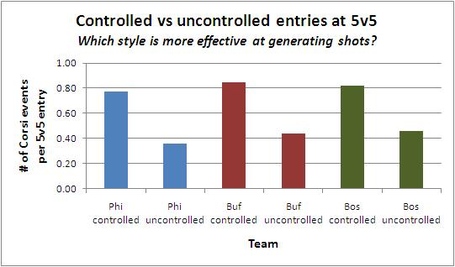 If you're still not quite convinced, here's another example: 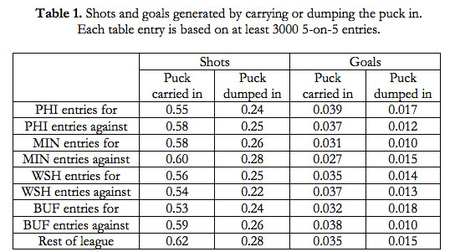 Basically, these graphs show that controlled entries generate double the shots and goals than that of a dump and chase method of gaining access to the offensive zone. The last row in the second graph, "Rest of League", is the most telling as, obviously, it's not just representing a handful of teams but that of the entire league.

As I've pointed out, there is a time and a place for both strategies and it mostly depends on who your forecheckers are and how the opposition sets up defensively. Players need to be aware of their surroundings on the ice in order to judge whether to dump the puck in or bring it across the blueline themselves.

That said, as a player, I'm certainly more on the possession side of the argument. I've played enough dump and chase styled hockey to know that unless you have good skaters who are not afraid to work hard in the corners or behind the net, you tend to create a lot of turnovers and even odd-man rushes using the dump and chase too frequently. However, when I carry it in or my teammates carry it in, we play much better, we can set-up faster, and we get a lot more shots on net because we're not scrambling around.

Thank you for reading! We hope we've helped paint a clear picture of some the key aspects in the game.