In the second instalment of our tactical formations series, we look at the most common penalty kill tactics used by the Ottawa Senators.

There were a lot of things that the Senators struggled with last season, and penalty killing was certainly one of them. The Sens were 22nd in the league in penalty kill efficiency at 80.9%. They also took more penalties than any other team in the league. I could get into the discipline issues this team had, but that's for another day. Today is about penalty kill tactics.

They may not have been first in the league in PK efficiency, but they implemented many of the most common tactics to kill off penalties. Let's take a look at some of the penalty kill formations used by the Senators this season. 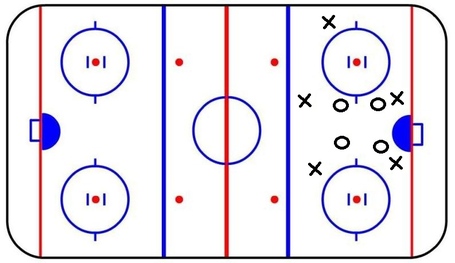 The box is your standard PK formation. Players simply form a box or square in the defensive zone to shut down the middle of the ice and keep the other team to the outside. A player will generally not move from the box formation unless the puck carrier gets into a good scoring position. In that case, one player will go and attack, hopefully pressuring the opposition to give up the puck.

It's not the most aggressive penalty kill formation, and it will not result in many turnovers, but the box is one of the most commonly used tactics in the book.

Here's what it looked like for the Sens in a game against the New York Islanders: 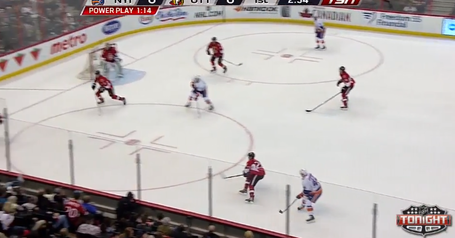 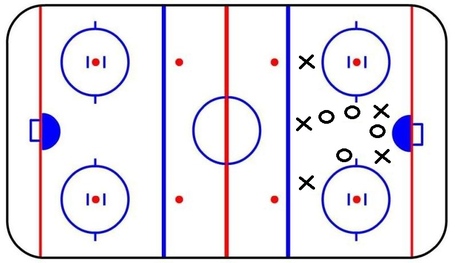 Instead of two players at the back and two up front, the diamond formation puts one player up front, two at the side, and one in front of the net. The objective here is to stop the other team from getting into formation. It's a much more fluid tactic than the box, as each player will step out in front when someone near them has the puck. The other players will rotate to make sure the diamond is maintained.

Here is a (loose) diamond formation by the Sens from the same game: 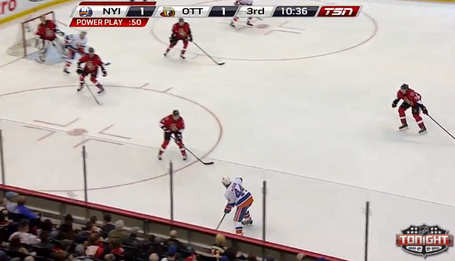 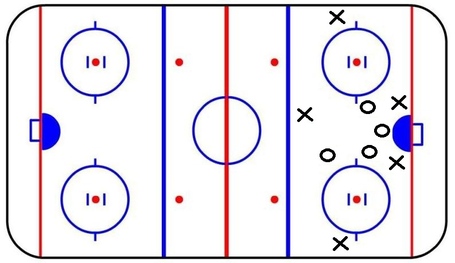 The wedge +1 involves players forming a triangle in front of the net, with one player chasing the puck carrier. This is a more aggressive style of penalty kill. It's common to see skilled teams implement this, in hopes of springing someone for a breakaway and a short-handed goal.

Even the Senators attempted a wedge +1 against the Chicago Blackhawks. You can see Karlsson, Michalek and Gryba in a triangle down the middle of the ice, while Greening extends out to the boards in an attempt to chase the puck carrier: 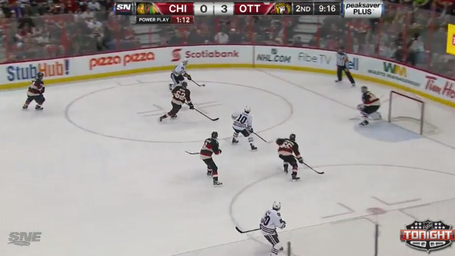 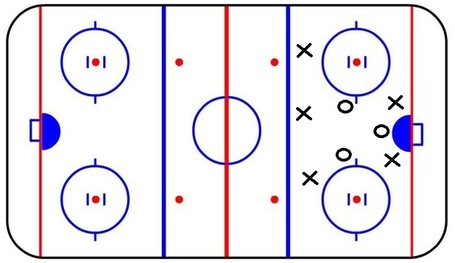 The rotating triangle formation works for both 5-on-3 and 4-on-3. Here, speed and agility are very important. Players form a triangle in front of the net. One player will skate full-speed toward the puck carrier, but stop halfway there. This way, they make the puck carrier panic without sacrificing position. As a result, these players need to be able to move around, and get back into position as quickly as possible. While he's in front of the puck carrier, a player will keep his body in the shooting lane, and his stick in one of the passing lanes. The goal here is simple, get the puck and ice it.

And finally, here are the Sens executing the rotating triangle on a 5-on-3 against the Edmonton Oilers: 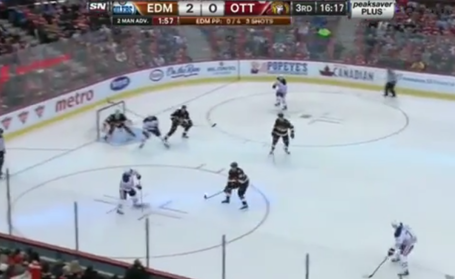 There you have it, the most common penalty kill tactics. If you're looking to learn more about positioning on the penalty kill, check out Weiss Tech Hockey. This is a great website with drills, videos and diagrams on everything from the most basic tactics, to ones used in the NHL. I hope you all enjoyed the latest instalment of our tactical formations series.