Internal Filling: A look at whether the Senators AHL affiliate can help bolster the NHL club

An introduction piece to the talent the Ottawa Senators have signed for 2014-15 and whether the players currently in the AHL can step up and plug some of the holes the Sens have in their roster.

Share All sharing options for: Internal Filling: A look at whether the Senators AHL affiliate can help bolster the NHL club

Ah, the offseason. A time of loathing and reminiscing for the Ottawa Senators. The draft, usually looked at as a time of excitement for Sens fans, is eagerly awaited but for a different reason than the usual. Pierre Dorion and co. only have four picks as of right now, but with a Jason Spezza trade looming around the corner, who knows what kind of present Bryan Murray can give his scouting staff. In light of these happenings, I thought it'd be a great time to examine what we currently have in our development system, and what kind of role we could expect these players to play if they make it to the NHL someday. The hope here is to give you an idea of what the Senators needs are so that we can reasonably assess draft picks, trades, and free agent signings.

There was a hope that while this year was a stumbling block for Ottawa, the Binghamton Senators could fill that gap and make a deep run in the Calder Cup playoffs. Unfortunately, the BSens were downed 3-1 in the best-of-five series against the Wilkes-Barre Scranton Penguins. Senshot, Joy Lindsay (posting at SensChirp), and Manny Elk over at the 6th Sens have done a fantastic job of examining this past season for the AHL Senators.

I highly recommend you check out the linked post, but a quick Cliffs Notes would be as follows: Although the BSens were the third-seed in the Eastern conference, they ranked 17th in the league in terms of score-close possession at even-strength. Why were they winning games? They had a very high 11.41 shooting percentage. In the short-term, scoring on a high percentage of your shots, or having a hot goalie (hi Toronto!!) can win you a decent amount of games. Although Andrew Hammond had a great year as a first-year pro, clocking in at ~ league average save percentage of .910, both the saves (.891) and importantly, the goals (9.1%), dried up in the post-season, leading to a quick defeat.

The Senators’ brief playoff season is a reminder of how quickly things can take a turn for the worst when you’re not winning the possession battle.

Now, despite all of this, there were many great individual performances this year. In interviews with Sens management, we've heard a lot about Matt Puempel, Mark Stone, Mark Borowiecki, Fredrik Claesson, and a host of others. I'm here to ask a very tricky, but important question: what does this mean for the future?

To start us off, I've created a quick depth chart for the Senators organization, from the NHL, AHL, ECHL, Junior, and Europe. 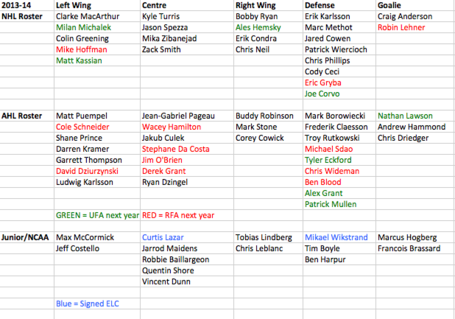 Now given what the rumours are surrounding many of the free agents and Jason Spezza, the Sens appear to have 2/3 spots open on wing, as well as 1/2 spots open at centre - depending on the position on the extra forward they carry. Defense still seems packed, with everyone except Corvo coming back. Ditto with the goaltender position.

For each position, I've created a quick table with standard stats like points, and shots, but also include something called NHLE for the prospects and AHLers, as a way to estimate what their scoring pace would be in the NHL. A quick primer on NHLE can be found here from the Flames blog Matchsticks and Gasoline.

(Note: Stephane Da Costa and Jim O'Brien weren't included because they don't appear to be a part of the organization's plans. Jakub Culek also wasn't included but for a data reason. Curtis Lazar will be on the RW chart)

As you can see, the Senators have some fantastic depth at centre in the organization, with possible top-6 centres in Zibanejad, Pageau, and Lazar. Although I am in favour of a Spezza trade (especially if the return is a defenseman), the loss of #19 will really put pressure on these young players to be consistent NHL players. Zibanejad had a fantastic season, with 16 goals and 33 points in 69 games, and the future looks bright for him as well, sporting a 2.2 shots/game rate and the team sporting a 53.8% shot attempt differential when he was on the ice. As he starts to play more than his 14.1 mins/60, especially on the powerplay, enhanced production will come.

Jean-Gabriel Pageau, the playoff hero from a year ago, had a rough start to the season in Ottawa. His 2 points, both goals, in 28 games is extremely disappointing, and although his on-ice shooting percentage was a paltry 3.5%, his individual shot rate was barely over 1 shot/game. However, we forget that Pageau is only a second-year pro, having played primarily in a shutdown role during the 2012-13 AHL season. In his time with Binghamton this season, Pageau had an extremely strong campaign, playing against the toughest competition, on the first PK unit, and still managing to sport a 58.8% goal-differential at even-strength. Positively, his shot rate went up from 1.72/game to 2.52/game. Part of Pageau's problem in the NHL this year was his usage - playing with poor linemates - but as his AHL numbers show, I think we can expect some improvement for next year. I'm hoping that Pageau can grow into a tough minutes top-9 centre, a la Marcus Kruger, in order to give the more offensive players better chances to succeed with offensive zone starts.

Right wing, once a strength in the organization (love you, Alfredsson, Hossa, Havlat) is pretty barren outside of Mark Stone - even more so if Bobby Ryan and Ales Hemsky don't re-sign. Sens AGM and Director of Player Development, Randy Lee, said recently that he sees Curtis Lazar as a right wing to start his NHL career, with the possibility of moving back to centre. It's never a bad thing to have players who can play both positions, and good organizations like Detroit, Chicago, and Los Angeles have players who can play both centre and wing in their bottom-six, where Lazar slots in. Also on right wing, 6'5" college free-agent signing Buddy Robinson had a solid first year of pro hockey. He faced relatively soft competition, but with a number of Binghamton's better offensive players graduating or moving on, look for him to have an expanded role, with hopes that he may fill a bottom-six spot soon. I always have time for players with speed, and when you add it to the size that Robinson has, it makes for an intriguing package.

At left wing, the Sens have solid depth. Clarke MacArthur is a bonafide top-6 NHL player, and all three of Hoffman, Puempel, and Prince look to have T6 potential. If the Sens walk away from Michalek, I would love to give Hoffman a chance to fill that role. A first-team AHL all-star, Hoffman put up a sparkling 1.31 points/game in the AHL this year, to go along with his 3.71 shots/game rate. In his short time with the big club, Hoffman had the highest shots/60 rate on the team and was the third-best possession driver (10+ GP) with the Sens getting 55.8% of shots while he was on the ice. Matt Puempel has an elite shot, and it showed with his 30 goals as an AHL rookie - just behind Blues prospect Ty Rattie. One player who isn't talked about as much, except when his trade requests get out, is Shane Prince who was on-ice for 50 GF at even-strength this year and only 25 GA - the second best rate on the BSens (min. 25 GP) after Stephane Da Costa. Just like Robinson, Prince looks to be ready for top-line duties in the AHL, and this season will be a great indicator on whether he's ready for an NHL role in 2015-16.

On defense, we have a whole bunch of question marks. Erik Karlsson is a legit #1 defenseman, and Marc Methot is a top-4 defenseman. Cody Ceci, Patrick Wiercioch, Jared Cowen, Fredrik Claesson, and Mikael Wikstrand have the "potential" to get there, but the ETA on the latter two aren't until after next season. For this reason, I am beyond confused as to why Bryan Murray thinks this team is a contender with so many question marks on D. Management is placing a huge bet on the current group, and without trading/drafting another top-pair defenseman, I don't see this team as a playoff threat.

(Note: thanks to Silver Seven Guest Contributor @JoshWeissbock for the goal numbers!)

Due to NHLE primarily projecting offense, there won't be a table for this set of players, but we will take a quick look at the BSens blueline for next year using goal-based statistics. With Borowiecki and Ceci most likely full-time NHLers, Fredrik Claesson will have prime minutes to prove that he's deserving of an NHL spot. Joining him on the inexperienced blueline will be Michael Sdao and Chris Wideman, both Sens draft picks out of college that did well this year. Trade acquisition Patrick Mullen, and ECHLer Troy Rutkowski will round out the group, they will probably be joined by two more bodies before opening night.

The important column to look at is the last one, which shows the players on-ice goal numbers at even-strength minus the players off-ice numbers (the team's). By this measure, we can take a stab at the player's impact on the team's goal numbers, and we see that Sdao and Claesson do extremely well - the latter excelling despite tough competition and in comparison to Mark Borowiecki. Wideman's EV goal numbers are a bit worrying, but his magic on the PP is worthwhile, especially with Ceci not in Binghamton anymore.

Though there are a lot of question marks on how the goaltender workload will play out, both the Sens and BSens are pretty set in terms of the bodies they have there. Craig Anderson and Robin Lehner will compete for starts in the NHL, and sophomore Andrew Hammond will get the bulk of the starts in Binghamton, with rookie Chris Driedger backing him up. Nathan Lawson is set to move on after an up-and-down, injury filled 2013-14 season. With Francois Brassard non-tendered, the Senators only have Marcus Hogberg as a goalie in Junior, so look for them to maybe take a goaltender with a late round draft pick.

I've presented a general outline for who the Sens currently have signed in their system for 2014-15, and over the course of the offseason, we'll go in depth on each position. As of right now, do we think that any of these players can fill the holes we identified of 2/3 wing spots, and 1/2 centre spots? I think so. The two top-nine spots should go to Mike Hoffman and Mark Stone, as both had fantastic 2013-14 seasons and look to be ready to take the next step. The position at centre should go to Jean-Gabriel Pageau who, despite his rough NHL year, had a stellar year for Luke Richardson and really elevated his game down the stretch for the BSens and in the playoffs. Derek Grant, who played a bit with Ottawa this year, is a potential option for injury if fill-in duty on the 4th line is needed, or if we need a solid penalty killer.