A knockout tournament to determine Ottawa's best-ever first round pick

n preparation for the NHL Draft on June 27-28 in Philadelphia and in part because the Senators don't have a first round pick this year, we've decided to have a knockout tournament to determine Ottawa's best-ever first round pick.

To determine which player should take the honour, there are a lot of different factors to keep in mind:

To keep things interesting, the above factors aren't ranked. Vote according to what you value most.

Since selecting Alexei Yashin second overall in 1992, the Ottawa Senators have drafted 24 players in the first round of the NHL Draft. Each player has been ranked (1-24) by me (Amelia). Because 24 does not fit knockout brackets well, players 1-8 have been given a bye to the Second Round of voting. 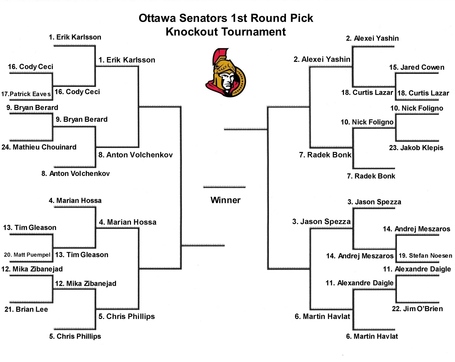 How does it work?

It's easy. Simply vote for your preferred player in each poll listed below. The poll will close at 11:59 pm on Friday night (June 27). The winning players will advance to the next round of voting.

Karlsson was drafted 15th overall in 2008. He has played five seasons for the Senators. Karlsson is a two-time All-Star and was named a First Team All-Star in 2012. He won the Norris Trophy and the Viking Award in 2012. He's represented Sweden on five occasions, winning silver at the 2014 Olympics in addition to being named to the Olympic All-Star team and being named the tournament's best defender.

Karlsson beat Cody Ceci in the second round with 61.5% of the vote.

Volchenkov was drafted 21st overall by the Sens in 2000. He spent seven seasons with the Senators before joining the New Jersey Devils as a free agent in 2010. Volchenkov captained Russia to a gold medal at the 2001 World Juniors and has twice represented his country at the Olympics. He has played 11 seasons in the NHL.

Volchenkov dispatched Bryan Berard in the second round with 83.2% of the vote.

Hossa was drafted 12th overall by the Senators in 1997. He spent seven seasons with Ottawa before being traded to Atlanta as part of the Dany Heatley deal. Hossa has represented Slovakia 14 times internationally, including at three Olympics and the World Cup. He was named to the NHL All-Rookie Team in 1999 and to the NHL Second All-Star Team in 2009. A five-time All-Star, Hossa won the Stanley Cup in 2010 and 2013 and played in three consecutive finals (four total). He has played 16 seasons in the NHL.

Hossa beat Tim Gleason in the second round with 99.1% of the vote. Sorry Tim.

Phillips was drafted first overall in 1996. He won back-to-back gold medals with Team Canada at the World Juniors in 1996 and 1997 and has won two silver medals at the Worlds. Phillips has played 16 seasons in the NHL, all with the Senators.

Phillips won over Mika Zibanejad in the second round with 69.3% of the vote.

Yashin was drafted second overall in 1992. He spent seven seasons with the Senators before being traded to the New York Islanders. Yashin represented his country on 16 occasions. He was the runner-up in Calder voting and Hart voting. Yashin was a three-time All-Star and was named a Second Team All-Star in 1999. He won World Junior gold in 1992 with CIS and World Championship gold in 1993. He represented Russia at two World Cups and three Olympic Games, winning silver in 1998 and bronze in 2002. He spent 13 seasons in the NHL.

Alexei Yashin managed to topple Curtis Lazar with 68.6% of the vote.

Bonk was drafted 3rd overall in 1994. He spent 10 seasons with the Senators before joining the Montreal Canadiens. He played 14 seasons in the NHL.

Bonk knocked out Nick Foligno in the second round with 80.9% of the vote.

Spezza was drafted second overall in 2001. He has spent 11 seasons with the Senators. Spezza represented Canada at the World Juniors on three occasions, winning three medals, and has won two silver medals at the Worlds.

Spezza beat Andrej Meszaros in the second round with 97.8% of the vote.

Havlat was drafted 26th overall in 1999. Havlat spent parts of five seasons with the Senators and has represented the Czech Republic at three Worlds (winning one gold medal), two Olympics, and the World Cup. He has played 13 seasons in the NHL.

Havlat beat Alexandre Daigle with 93.9% of the vote.