Why Erik Karlsson Should Have Won the Norris Trophy

The James Norris Memorial Trophy is an annual award given to the defenseman who demonstrates throughout the season the greatest all-round ability in the position. Based on the numbers Erik Karlsson was a better all-round defenseman this past season and more valuable to his team.

Share All sharing options for: Why Erik Karlsson Should Have Won the Norris Trophy

With only five second place, three third place, four fourth place and eight fifth place votes Erik Karlsson was seventh in Norris Trophy voting. He finished behind the likes of Drew Doughty, Alex Pietrangelo, Ryan Suter, Shea Weber and Zdeno Chara. The winner was Duncan Keith of the Chicago Blackhawks with 68 first place and 35 second place votes by a landslide. When you compare them side by side Erik Karlsson should have won the Norris over Duncan Keith.

The James Norris Memorial Trophy is an annual award given to the defenseman who demonstrates throughout the season the greatest all-round ability in the position. Based on the numbers Erik Karlsson was a better all-round defenseman this past season and more valuable to his team. But we all know that numbers do not replace the eye test. But in this case let's examine why Erik Karlsson deserved the Norris over Duncan Keith.

Duncan Keith had the luxury of skating alongside Patrick Sharp, Jonathan Toews, Marian Hossa and Brent Seabrook for the majority of his time on ice. While Erik Karlsson clearly was at a disadvantage playing with Jason Spezza, Kyle Turris, Milan Michalek and Marc Methot.

Granted Spezza, Turris, Michalek and Methot are not terrible players by any stretch of the imagination. However they are truly not on the same level as Sharp, Toews, Hossa and Seabrook. In spite of this disadvantage Erik Karlsson still managed to put up more points, shots and a better relative possession rating along with more defensive zone starts that Duncan Keith.

Another telling statistic is the percentage of icings for while each player was on the ice at five on five. In general this number can indicate whether the team had problems exiting their defensive zone efficiently.

Of course numbers do not tell the whole story, but where would the Senators be without Erik Karlsson this past season. For this we can check on both players’ WOWY statistics. This stands for with or Without You. It measures the player’s performance when they are on the ice with another player.

Making players around them better

In Erik Karlsson’s case his numbers clearly show that he made the players around him better. In fact, only one Ottawa Senator that played regular minutes had a better puck possession rating without Erik Karlsson. Who was it? Surprise, surprise it was Clarke MacArthur. 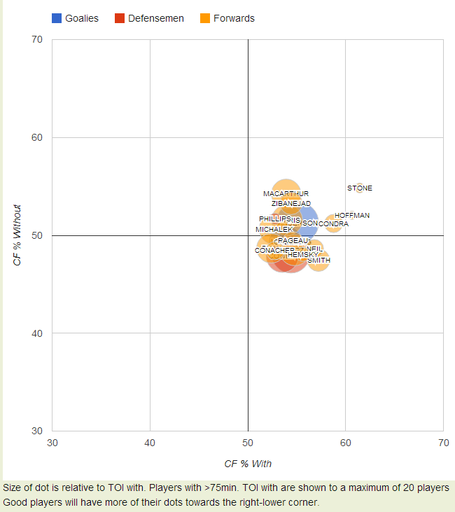 In Duncan Keith’s case the players that he played the most often with saw a drop in their puck possession without Keith. However Keith also had his puck possession drop when not playing with these players. That could indicate that Duncan Keith’s success is interdependent on his teammates. While Erik Karlsson was much more balanced and was more often than not better when playing without a teammate. 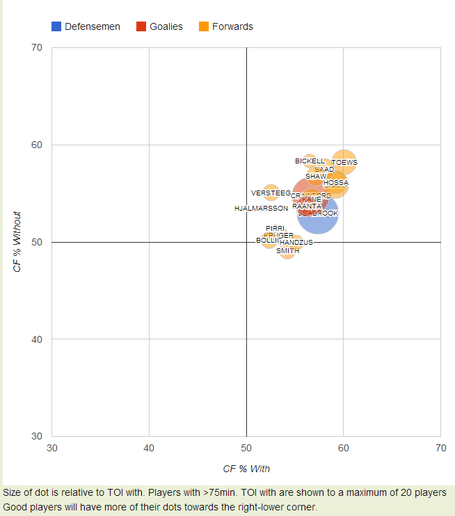 It appears that Erik Karlsson's lack of votes this year could be somewhat based on the poor showing the Ottawa Senators had as an overall team. However the Norris Trophy is not the most valuable player which it is often deemed that winning is a requirement.

The requirement for the Norris is the best all-around ability in the position. Part of that ability is to make the players around you better. There is the misconception that Erik Karlsson is an offensive defenseman only. That is truly wrong and his statistics illuminate that fact.

One thing that Senators fans can be sure of, his Norris Trophy from the 2011-12 will definitely not be his last. The fans in Ottawa should be enjoy watching his elite skills for many years to come.