An alternative way to spend a little bit of Euge's money on a Senators starting lineup! Don't forget the bonus!

Share All sharing options for: Cost Per Point Starting Six

An all-time roster game has been kicking around twitter (courtesy of @mhenderson95 and @ballislife) for a couple of weeks and we at Silver Seven have decided to take a crack at it. But this game is different.

Any armchair GM can spend to a $20 cap. This is a different test. Are you up for the challenge?

Again, the rules are simple: you have $30 million in new TV revenue to spend. You need to fill out a starting lineup with one centre, one left winger, one right winger, two defensemen, and one goalie. Don't forge the bonus! Take whoever you want, but remember, any idiot can spend to the cap. Only a true cap genius can maximize the team's cost per point!

Here's your Sens menu, courtesy of Ryan Classic, the mastermind of this version of the game: 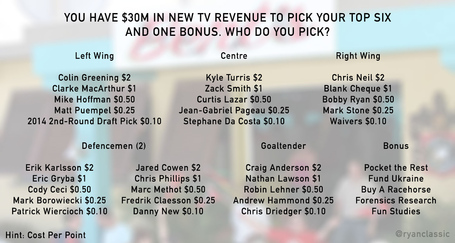 For me, the 2014 2nd rounder is going to look great on the left side of Curtis Lazar, whose intangibles make him an excellent candidate to succeed Jason Spezza as the team's captain. It makes sense to go with the waiver option for right wing, but I can't pass up the blank cheque possibility. Wiercioch and Claesson will line up on the blue line for my Sens and Andrew Hammond will be between the pipes. There's a lot of good bonus options, but I can't pass up Forensics Research bonus; hopefully some day, Jerry Bruckheimer will option the rights for my Matt Cooke Investigation into a television mini-series. That's a total of $2.20.