The Silver Seven Staff spends some money in the latest edition of the Email Hot Stove.

An all-time roster game has been kicking around twitter (courtesy of @mhenderson95 and @ballislife) for a couple of weeks and we at Silver Seven have decided to take a crack at it. The rules are simple: you have $20 to spend and need to fill out a starting lineup with one centre, one left winger, one right winger, two defensemen, and one goalie. Take whoever you want, but remember, your team can't exceed $20. 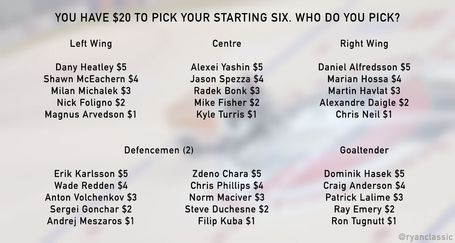 Well, seeing as Melnyk is our owner, I can't see how I'd spend to the cap. So I'm making the Melnyk-friendly budget team.

Magnus is an easy choice on LW. Solid defensively and was once an all-star.
Turris is also a bargain on centre. He's not the greatest ever, but I'll make my owner happy.
Alfie is the favourite for RW, but Hossa and Havlat are among my all-time favourites. I'll pick Havlat since he's cheaper.
I think of D in terms of pairings: Redden-Chara, Phillips-Volchenkov, Karlsson-Kuba. Hey, the cheapest one has Karlsson on it! A star to sell jerseys.
I have to pick Tugnutt on the back end, budget or not.

So there, Arvedson-Turris-Havlat, Kuba-Karlsson, Tugnutt. This costs $12 toward a $20 cap. This gives Melnyk lots of space to expand his Caribbean mansion, campaign for a casino, pay out his personal debt, or whatever else he uses his money for.

I'm taking Heatley and Karlsson because it's impossible to replace their point totals at those positions. I'm taking Hossa over Alfredsson because I'm saving a buck and I think Hossa's better value. Turris saves me big money. He's not better than Yashin or Spezza, but with his cheap price, it makes sense to take him over Bonk or Fisher. There are some interesting options on defense. Karlsson-Chara would be pretty awesome to watch, but I hate Chara so didn't use him. I'd love to see Karlsson paired with another offensive-minded player. I think the offensive combination of Karlsson and Duchesne could be a lot of fun. Everyone in goal has a bit of an asterisk attached to them, so why not go with Lalime. That brings me to $20.

I built my team with hat tricks in mind.

I felt Heatley was way better than any other left winger so I had to take him. Karlsson is the greatest player in the history of the team so he is a given.

At this point I only had 10 points for 4 players, originally I toyed with Lalime, Meszaros, and Havlat but then I had to Bonk at centre. Feel 2/3 at centre are really overpriced so if you can't afford Spezza/Yashin, then go with Turris.

Havlat at his best was a point/game guy so he is solid value at 3.

Then it came down to Chara v Hasek and I think the greatest goalie in the history of the game compared to Tugnutt is a bigger difference than the #2 defenceman to play with Erik.

I don't have great faith in the goaltending, but with those 5 skaters I don't think I'm getting outshot or out chanced, ever. Karlsson-Chara is music to my ears, and all three Fs have great speed and good to great defensive awareness.

It's awesome to imagine a Sens team that is able to spend to the cap. I'm one of those who would love to see Alfie back in a Sens uniform, and would hate to see Heatley back in red. Turris is a steal of a deal at $1. Karlsson is worth it at any price. Volchenkov was a rock when he was with the Sens. Emery was... interesting both on and off the ice in Ottawa, but he can get on a hot streak. McEachern is there to fulfill the dream of spending to the cap.

Alright, so here's mine. I made about 500 different combos, but I tried to balance skill and favourite players:

Ron Tugnutt: I felt he was better than Emery and he was my favourite as a little kid.

Hope I did this right. Tried to balance out defensively responsible players with players who can put up points. Tugger will be the underdog here, just you guys wait. Hasek will pull his groin and you'll be sorry!

I tried to build from the net out...

The forwards group is a good blend of speed, defensive responsibility, and offensive dynamism. Although Arvedson had an uncelebrated NHL career, his time in Ottawa alongside Marian Hossa was a good run--reuniting him with Hossa once again should bring back that success. The inclusion of Turris is not only a hugely cost-effective roster decision, but Turris' mature style of play would surely blend well with Arvedson and Hossa.

This pairing has it all. What the forward group may lack in offence is made up for with these two, both in terms of preventing goals against and generating goals for. As an added benefit, Karlsson's ability to spot streaking forwards would work very well with the speed this squad has up front. When Karlsson takes chances, Chara covers for him; if they both pinch on a play, Karlsson's fast enough to get back and cover up.

I'd originally slotted Dominik Hasek into this slot, but I think the slight downgrade in nets was worth it in order to get more money to sign a better right winger--I needed to make room for Marian Hossa, and the best spot to get it was in net. But realistically, considering the skaters this team has the difference between Anderson and Hasek would likely have been very minimal since there wouldn't be a huge number of scoring chances given up.

I figured with Chara and Karlsson at the back, I had some flexibility up front. Turris is a steal, considering the year he had and how much he has developed here. Plus, he and Hossa would be great together.

And this is all assuming both Michalek and Emery are healthy (so a perfect world).

This lineup is 8, with a slightly less neat 12 to spare. But sometimes you need to splurge a little, right?

Who makes your team? Tell us in the comment section!