A look at three of our role players who can either be impactful or invisible.

Share All sharing options for: Greening, Condra and Smith: A Cross Examination 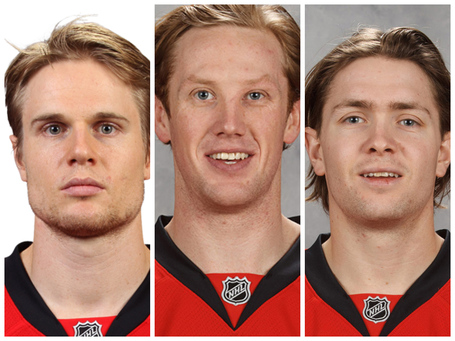 With all of the Spezza and leadership talk aboard the good ship Sens these days, I thought I'd peel back the curtain a bit, and take a deeper look at the some of grindhouse, factory-floor machinery of our fair team.

I don't know what it is about Colin Greening, Erik Condra and Zack Smith, but in the last few years, these Bingo Boys have been interesting to watch for many reasons. Who can forget Greening's goal with less than 10 seconds left in the third to beat the Leafs in the shortened 2012-13 season? Or what about Zack Smith's absolute shellacking of Nathan Horton in Beantown in 2011? Or what about Condra's crafty, feisty game-winning goal against the Devils on March 8, 2011 to keep the Sens weak playoff hopes alive?

Though not always flashy players, all three of these fellas have been known to play a gritty, rough and tumble style of hockey that doesn't always look pretty, but that gets the job done. While Zack 'Smitty' Smith has played six NHL seasons (two more than the other two), all three played together in Binghamton and sort of arrived around the same time in Ottawa.

With the obvious approaching changes that are going to happen to this team, the question must be asked; Can we afford to keep all three?

Probably the strangest quality that is shared among the three players is an ability to either make amazing plays or to fade into the background.

How many times in the last few years have you either seen one of these guys making a major contribution, or found yourself wondering 'hey - is Smith/Condra/Greening playing tonight? I've barely seen him?!'

But before any serious cross-analysis can be done, it's important to look at each player.

Generally seen as the most valuable of three, Smitty looks like a total NHL player on paper. At 6'2", 210 lbs, Smith is no stranger to physical play and he can put the puck in the net. With 31 goals combined from his last three seasons, his scoring prowess seems to be somewhat static. He also has the second most GWG's (7 NHL, 9 lifetime) and had the highest point season of any of the three with 70 in 72 games in 2007-08 with the Swift Current Broncos.

Unfortunately, we all know that Smith has his flaws. He can be rather careless with the puck (especially in his own end), and at times, it's almost like he hangs on to the rubber for just one or two seconds two long, making it easy for the opposition to pick his pocket. His tendency to get frustrated on the ice can also get the better of him, and he can sometimes end up causing needless penalties with that extra ZSmith shove. I think he was someone who we had all hoped might crest the 20-goal marker this year, but I'll still take his 14 goals any day.

Overall, Smith is an impact player when he's clicking and it's obvious that Coach Paulrus trusts him. This next year or two will be a make-or-break stretch for Smith and his future as a strong, 15-goal-scoring, checking line centre.

Colin 'Soylent' Greening is a bit of strange case and a disappointment in the eyes of many Sens fans. The 6'3", 211 pounder notched 17 goals and 37 points in his first NHL season (2011-12), but he has trended drastically downward in his production ever since. Nabbing only 8 goals in the 48-game 2012-13 season, and then a meagre 6 in 76 games this past year, there is obviously something not clicking in Greening's game. Whether it's a confidence issue or something else, he has had far too many 'oh no!' and 'what the $^%*' moments for my liking in the past two years.

Never touted as a scorer, his highest point season was 62 in 56 games with the Nanaimo Clippers in 2006. Although he's had his moments (GWG's against the Leafs and in 2OT in the playoffs against the Pens last year), it's almost like he doesn't know what to do with the puck when he gets it. This is a guy who is known to have a ton of speed (can do a full lap in 12.963 seconds) but who often looks like the slowest player on the ice.

It's obvious that Greening doesn't really know what kind of player he is, and in my mind, the 28-year-old Newfoundlander  isn't getting any younger and might be better suited in the minors.

Admittedly, Erik 'Up-Up-Down-Down-Left-Right-B-A-Start' Condra is one of my favourite Sens players. Also known as Erik 'Ana-Condra', the fiery 6', 189-pounder can often be seen expanding to twice his size when he's on the ice. A role player through and through, Erik wouldn't be my first choice on the PP but definitely on the PK. He doesn't shy away from board battles and he seems to play every shift with hard-skating and gusto. Point-wise, Condra is also the steadiest of all three over the course of his junior and NHL career with an average of 29.07 per season.

On the other hand, Condra is a player with probably the worst puck-luck of any player in the NHL. With 11 points in his first 26 games in the NHL (including 2 GWG's), Condra has cooled and levelled off in his production. The amount of times he has been in 'almost' or 'close-but-no-cigar' situations near the net this past year was monolithic. Condra will probably never be a top-line winger, but he seems to know what he's good at and he's fairly dependable with the puck. When he does put it in the net, however, 'Cons' seems to make it count as he has 14 lifetime GWG's (junior and NHL combined).

With the right leadership, I can see Condra as one of those deep-pocket players that helps a team go on a long playoff run and I'd definitely keep him around beyond his current contract.

Out of these three, if I'm a betting man, I don't see Greening sticking around the Sens much longer. I just don't know what you can hope for in a player who doesn't seem to be able to fit into any sort of role. Smith and Condra have their detractors, but in the end, they can fit into a role and play their parts within any given system.

Although I like all three of these guys, I'd guess that their days as Sens players are numbered.