Ottawa faced an Islanders team that essentially ended its playoff hopes last week, on Tuesday night in Long Island. The New York line-up featured 11 rookies, while the Senators took out a rookie (Mike Hoffman) in favour of Matt Kassian, who drew back in to match-up against the heavy-hitters in blue. The game started sluggishly, with Matt Kassian and Brett Gallant disrupting play twice, before Clarke MacArthur took a slashing penalty. Zack Smith had the best chance on the Isles power play, but couldn't beat New York goaltender Anders Nilsson. New York got another chance to take the lead on a Marc Methot penalty late in the period. Ryan Strome had the best chance of the PP but his wrist shot rang off the post. Ottawa got its first power play with less than minute to play in the period, but couldn't capitalize before the end of the first. It was a period with very little flow, but ended with Ottawa being outshot 17-8.

The second period started with Ottawa on the power play. Despite some pressure from Kyle Turris and company, the Sens were unable to break the deadlock. Midway through the period, Marc Methot saved an Islander goal by blocking a wraparound attempt with his stick. Shortly after, Anders Lee took an undisciplined roughing penalty which sent Ottawa to the power play for the second time. Ottawa finally broke through on its third power play of the game, with John Persson in the box for tripping Erik Condra. After some passing between Erik Karlsson and Ales Hemsky, Jason Spezza's slapshot beat the Neil-screened Nilsson five-hole. New York had a few chances in front of Craig Anderson, but the period ended with off-setting penalties to Patrick Wiercioch and Matt Martin. Ottawa entered the second intermission leading 1-0. Shots 32-19 in favour of New York.

Early pressure to start the third resulted in a Frans Nielson goal to tie the game at one. It was the kind of defensive breakdown that has defined Ottawa's season but the goal was also a result of New York's aggressive play. Turris had an excellent chance to restore Ottawa's lead midway through the period after receiving a pass from linemate MacArthur. Turris tried to go top-shelf, but Nilsson was ready with a great glove save. A weak call against the Isles sent Ottawa to the power play again, but New York had the best chances. Karlsson was forced to make several defensive plays before eventually taking a slashing penalty because of the Isles offensive pressure. After a five-minute period of New York pressure, the Captain took over the game. After taking a feed from Ales Hemsky, Spezza fired a wrist shot from a bad angle that went over Nilsson shoulder, into the net, and then quickly out. Play continued but Spezza called for a review immediately and when the officials eventually convened, they quickly called it a goal. After being awarded his second goal of the game, Spezza was right back at it, breaking in alone on the Islanders net, but was denied a five-hole goal. His linemates Hemsky and Milan Michalek then got in on the action and a nice give-and-go passing play left Hemsky all alone in New York's zone. Hemsky's low snip was just as beautiful as Spezza's second goal. Hemsky's goal put the game out of reach and Kassian added an empty-net goal - his first of the season - to seal the victory. Ottawa wins 4-1. Shots 46-31 in favour of New York. Despite the win, Ottawa was officially eliminated from playoff contention tonight when the Columbus Blue Jackets secured a point.

Andy was peppered in the first with 17 shots. I don't think those totals reflect New York's pressure, but when a team gives up that many shots against, things can go sideways quickly. Andy kept the Isles off the scoreboard and gave Ottawa a chance to take the lead. Andy was excellent tonight, making 45 saves and had a .978 SV%.

Ottawa's captain had two goals tonight and the second was a beauty. He looked dangerous, especially in the third period, and could have had a hat trick on a breakaway in the third. He also could have had a hat trick if he had taken a shot at an empty-netter instead of passing it off to Kassian so his teammate could score his first goal of the season. If we are watching the final games of his Ottawa career, he's making sure we enjoy his performances.

Hemsky had another three point night with the Senators, registering two assists and a goal. His goal was another beauty and his highlight-reel strikes are becoming something of a convention in Ottawa. 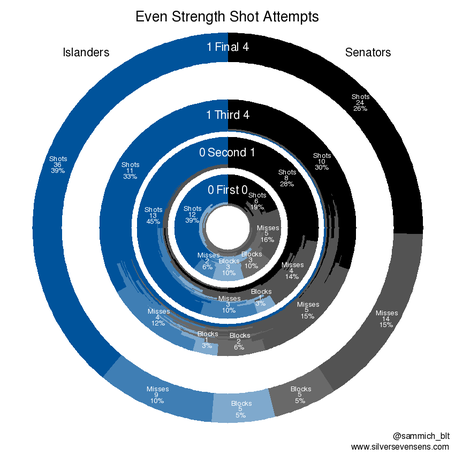