With little left to play for, the Sens put forward a strong effort and win an entertaining game

Heading into this one, it was hard to imagine the Senators putting up much of a fight: they were coming off one of their most embarrassing games of the season in a 7-4 loss to the Montreal Canadiens, they were facing a stout New York Rangers team,on the road, and on the second night of a back-to-back. Taken all together, things weren't looking so good.  Robin Lehner returned to the net, while Colin Greening and Jared Cowen remained out of the lineup. I think I speak for most Sens fans when I say I wasn't exactly looking forward to this particular game.

Early on, the action was fairly wide open with the two teams trading chances. The Spezza line looked sharp throughout the first period, generating numerous great chances in the slot, but the Rangers were just as threatening. A few standout saves from Lehner,  highlighted by a sprawling effort on Pouliot in the slot, kept the Rangers at bay. Not long after Ales Hemsky literally tried to walk the puck into the net off a rush, MacArthur found Stone with a beautiful feed on which he snapped glove side on Lundqvist for a 1-0 lead.

New York would push back immediately (a theme throughout this game) and draw a power play opportunity after Gryba dumped his man in front of  the net. Following a good kill, a rare sight this year, Mika Zibanejad would jump on a loose puck from a scrambled draw and bury it glove side.

The second period yielded more of the same: high event hockey with both teams generating quality chances. Almost five and a half minutes into the period, Mats Zuccarello would deflect a shot from the point past a helpless Lehner who may or may not have been interfered with. I didn't feel as though it was that egregious, but Greg Millen certainly harped on it for a while so it's worth mentioning here. The Senators were back on their heels for a couple of minutes after the goal, and Lehner was forced to make another big save.  Needing a  stabilizing shift, the Spezza line generated a strong cycle and after a great play at the point by Karlsson at the point there was a SCRAAAAMBLE that ended with Jason Spezza jamming it home. 3-1 Sens almost halfway through the second.

Alas, as has been the case throughout this season, the issue wasn't goal scoring but goal prevention. Just over three minutes later, the Smith line would get badly hemmed in and eventually concede another goal to Zuccarello. The Sens were mostly able to keep the Rangers under wraps after that, and the 3-2 scoreline remained heading into the 3rd.

As a wise man once said: "When leading in the 3rd period, beware the ides of score effects". Or something like that. Either way, outside of another great Mark Stone chance, the Sens weren't able to generate much in the first ten minutes or so of the third. It was largely all Rangers, and Robin Lehner. Turris had a fantastic chance to ice the game away on a 2 on 1, but Henrik Lundqvist stood tall yet again. An aspect of this game that I'm sure will go underreported after the fact was the strong play of Lundqvist. He was outstanding throughout.

With things tightening up, Chris Neil took a run at Marc Staal and all hell broke loose. Smith punched Zuccarello a bunch, Neil mauled Staal and the MSG crowd chanted "Asshole! Asshole!". The Rangers got the extra penalty, and all in all, it felt like a playoff game. Given the team's position in the standings, this will have to do. The subsequent power play featured very little threatening action from Ottawa but had the effect of killing the clock until fewer than 50 seconds remained.  New York could never break out of their end cleanly again, and Ottawa took it home. 3-2 the final.

Overall, I thought it was a positive result because of more than just the final score: Ottawa was on the second of a back-to-back, on the road, against one of the best teams in the East, and they essentially played them even through two and a bit periods. They generated a huge amount of chances for, again, and this time they put one more past the other goalie than got past theirs. For a game that I had zero hope for going in, this turned out about as well as you could have hoped. Only 4 games left before a long off-season, enjoy them Sens fans!

Sens Hero: Robin Lehner. He was outstanding again in this one, stop 41 of 43 shots. It's been great to see a return to form from the young guy after a rough stretch. At some point, the Senators are going to be his team. Outings like this give you confidence he'll be able to handle it.

Sens Hero: The top 6. Both the Spezza and Turris line looked very good  by my eyes, and the underlying numbers seemed to support the assertion.

Sens Zero: Team Defense. Robin Lehner's outstanding play overshadowed the fact the Sens gave up a whooping 43 shots against. It's been the same story all year long, but if your team is giving up that many shots against you'll need superlative goaltending to win. Tonight, they got it.

Sens Killer: Mats Zuccarello. He was flying around all over the ice and potted those two goals. Along with Nash, I thought he was the Rangers' best forward. 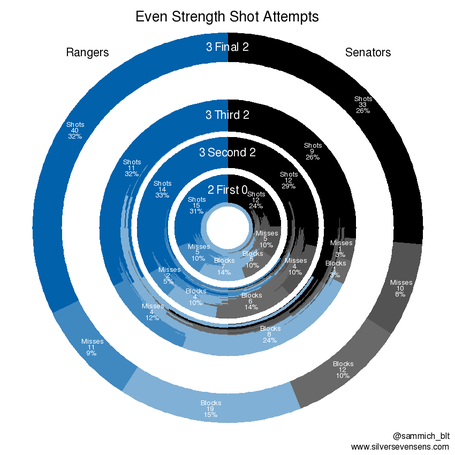