The Sens faced off against the Montreal Canadiens tonight, in a rare Friday night edition of HNIC. The Senators got off to a great start, with an immediate chance on Habs goalie Peter Budaj and drew a penalty 10 seconds into the period. The best chance for the Senators came on a passing play between Patrick Wiercioch and Kyle Turris. Montreal managed to kill the penalty, but Zack Smith gave Ottawa the lead seconds later, scoring off the faceoff. Two minutes later, Ales Hemsky tipped a Wiercioch point shot into the Montreal net. 1:15 later, an Ottawa 2-on-1 between Mika Zibanejad and Smith resulted in Smith's second goal of the game. It was a fantastic start, but with 55 minutes remaining, the lead was far from safe.

It took Montreal just over a minute to respond. Andrei Markov scored from the goal line on a goal that Craig Anderson wants back. It was a poor goal and helped Montreal turn up the pressure. Less than two minutes later, Montreal added another, on a Mike Weaver point shot that went passed a screened Anderson. Weaver was involved in a dangerous play minutes later when he stuck out his hip on an unsuspecting Clarke MacArthur and sent the Ottawa winger into another Montreal player. MacArthur was down on the ice for some time but would eventually return. The puck was nowhere near MacArthur, but no interference penalty was called. Montreal wrapped up the first period with a late goal from Max Pacioretty. Pacioretty put a backhand passed Craig Anderson after beating Sens defender Eric Gryba. The first period ended tied at three; shot 13-11 in favour of the Senators.

Ottawa started the second period by successfully killing off an early penalty but quickly fell behind on a Lars Eller goal. It was bad goal for Gryba: he panicked when Eller hit him behind the net, desperately cleared the puck to Brian Gionta, who fed the puck back to Eller. Eller, unchecked because Gryba had fallen, wristed the shot passed Anderson for Montreal's fourth goal. Ottawa equalized shortly after on a strong drive to the net by Smith that left a rebound for Chris Neil. However, the goal was waived off due to incidental contact; the Montreal defender having slid into Budaj. It was the wrong call, but that's how things are going. Things got heated after the disallowed goal. Karlsson laid a clean hip check on Brendan Gallagher. Alex Galchenyuk did not approve and went after Karlsson. It was sort of a fight, but Karlsson didn't drop his gloves and both were assessed roughing minors, with Galchenyuk getting the extra two for starting things. Midway through the period, Smith set up another excellent chance on a 2-on-1 with Karlsson. Rather fed Karlsson, Smith sent a pass to the trailing man, Kyle Turris, whose snap shot rang off the crossbar. A tilt between Jared Tinordi and Gryba result in an instigator penalty for Montreal. It was a nice power play from Ottawa with plenty of good movement, especially from Erik Karlsson. It ended in unlucky fashion though. Zibanejad couldn't accept a pass and the puck trickled to Wiercioch. With a Montreal forward on him, Wiercioch didn't realize there was another Hab behind him. His stick was lifted from behind and Pacioretty was off on a breakaway. Pacioretty wasted no time firing a wrist shot five-hole on Anderson. The period ended 5-3 in favour of Montreal, with Ottawa outshooting Montreal by a healthy margin (28-15).

Pacioretty picked up where he left off to start the third period, with an early goal to complete the hat trick. Five minutes into the third period, Erik Condra had a chance to bring Ottawa within two goals, but wristed the puck off the post. After Montreal added a seventh goal, Zibanejad netted his 15th of the season late in the period. He managed to slide the puck five-hole on Budaj, who had been solid since his rough start, while falling. It was too little too late. Montreal wins 7-4. Shots 43-23 in favour of Ottawa.

Smith had a fantastic game, scoring two goals and had a few opportunities to net a third. He set up a few of his teammates with excellent scoring chances. He spent a little too much time in the third period trying to start something physically with Montreal, and took an unnecessary penalty. Sure Emelin sold the call, but it wasn't Smith's first slash of the period. His complaining about the call (a feature of his game emphasized recently) earned him a misconduct. Still, paired with Mika Zibanejad, he was flying all night. It was one of his best games as a Senator.

Yes, he made a defensive gaffe on the fifth Montreal goal by not being aware that there was a man behind him, but when Ottawa looked dangerous tonight, Wiercioch was involved. He managed just one assist, but looked impressive on the power play.

Gryba has been steady for the Senators all year and his play has changed the opinions of many Sens fans. Tonight was not one of those nights. Gryba looked bad on two of Montreal's goals but I expect him to rebound.

Craig Anderson was terrible tonight. Montreal's first goal was awful and all on Anderson. The goal gave Montreal a spark and was the first of SEVEN unanswered goals. Ottawa finally managed to limit an opponent's shots and yet could not get a save from Andy. Yes, Montreal did score on a breakaway, but you can make saves on breakaways. He was only really hung out to dry on Montreal's seventh goal. At one point in the third, he had allowed 7 goals on 18 shots. That's just absurdly bad. In fairness to Andy, it was clearly not his night and I'm not sure why he was left in, absorbing all the goals. The only thing I can think of is Ottawa was on the first night of consecutive games. He finished the night with a .696 SV%.

Weaver scored his first goal of the season and added an assist in the first period. He was also a physical force and his late hit on Clarke MacArthur left the Ottawa winger stinging for the rest of the game.

Pacioretty had a fantastic game. Absolutely fantastic. He had a five-point night, including a hat trick. He put the game out of reach for Montreal and now needs just two goals for 40 on the year.

Both MacArthur and Hemsky took big hits in the first period. MacArthur was interfered with by Weaver and lay in obvious pain on the ice for several minutes. He played the rest of the game, but looked uncomfortable skating on every shift. Ales Hemsky took a big hit from Tinordi in the first period along the boards. Hemsky had a few shifts after the hit, but eventually left the game and didn't return. 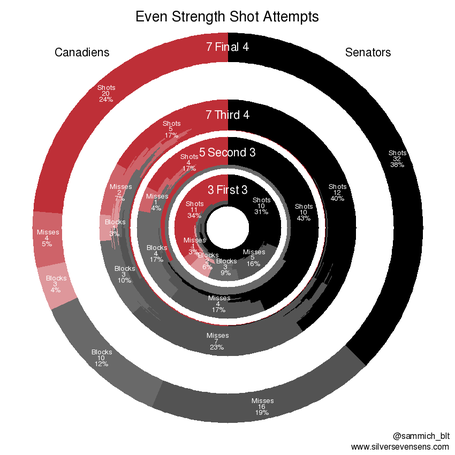