Share All sharing options for: Senators lose to Islanders, inevitability

Today was a beautiful sunny day where I live. It was still irritatingly cold, so you'd have to be a real optimist to call this season "spring", but viewed from a window it looked a bit the same.

It has been a while since I sat down to a Senators game with sunlight streaming in through the windows. It was reminiscent of the playoff runs of years past, and the feeling in your chest that only the Stanley Cup playoffs can produce. You know the one I mean, the one that is more than just excitement: it's hope, it's terror, it's anger, it's love, and it sticks with you all day and makes it impossible to do anything but think about the next game. You wake up in the morning knowing that today is a playoff game, and every minute of the day lasts an hour because all you want to do is go home and throw on your jersey and lucky underwear and enjoy the exhilaration of a playoff game.

It’s this that tortures me: the empty spot in my chest as the days get nicer and we face the overwhelming probability that the Senators aren’t going to be in the playoffs.  It’s like being told you’ll need to work through the holidays this year.

Tonight’s game was as close to a playoff game as the Senators are going to get this season. It was an elimination game. And they lost. Worse, they lost because of the same silly faults that have plagued them all season: poor discipline, concentration lapses, and bizarre coaching decisions. They continued to be the same team they have been since October.

I’m going to miss the playoff feeling, but if I’m being honest with myself, I know in my heart that this gifted but tragically flawed team doesn’t deserve to be in the postseason, and couldn’t possibly succeed even if they snuck in. Tonight’s game reinforced those facts. Here’s what happened.

As anyone who follows the Senators closely might have expected, pretty much everything of note in this period related in some way to a penalty.

Matt Kassian drew an early call, giving him a rare opportunity to make a positive impact on the game; it almost worked out too. The Senators, with Erik Karlsson and Patrick Wiercioch manning the points, looked very dangerous on the ensuing powerplay. There were a few great chances, including Mark Stone missing a fleeting opportunity at a wide open net. I'm a big fan of Mark Stone, but if he keeps missing open nets he's going to make Erik Condra redundant.

Notably, because it would be an issue all evening, the Islanders also had a significant chance during this first Senators powerplay. Cal Clutterbuck was gifted a clear breakaway after Erik Karlsson failed to hold the puck in at the line. Does anyone else feel like the Senators have been giving away an unusual number of breaks lately by trying to hold the points?

Anyhow, Craig Anderson stopped that breakaway. And then some dangerous screened point shots. And then made a diving save to deny Johan Sundstrom. On the whole, Andy was strong all around as the Senators made a number of the mistakes the Senators tend to make. He kept them in the game for a while. But even the best goalie can't save a team from itself forever.

The Islanders eventually scored because the Senators just took too many stupid penalties. After Mike Zibanejad drew a penalty (that might easily have been a penalty shot), things were looking good for the Senators. But as with their first powerplay, the Senators gave the puck away and almost allowed a goal. Though Andy was again equal to the task, this time the Senators also took a penalty trying to keep the puck out. Then, the mistake of a blown advantage was quickly compounded when Zack Smith took a high sticking penalty in the offensive zone, leading to an Islanders 5v3.

The Sens were able to kill off the first penalty, but not the second. I honestly don't know whose blown assignment led to Josh Bailey getting left alone in the slot, but it shouldn't have happened. Given too much space and time and a good shooting angle, Bailey was able to rifle an unstoppable shot over Craig Anderson's shoulder.

The Islanders would take that 1-0 lead into the first intermission.

Mark Stone had another decent chance when he cleverly dropped back into the slot on a break and found himself with the puck and acres of space to shoot it. He missed. But while this can be counted as another case in which Stone missed the net, you can't help but notice that the guy is good at getting open in good positions. This can be an extremely valuable skill, but only in combination with accurate shooting. I think his shooting will get there.

Really, the balance of the period was relatively uneventful.

In contrast, the third period was rather nerve racking. Time was ticking down on the Senators’ season, and they desperately needed a goal. For a while it seemed like the game was going to end 1-0.

But then some wonderful things happened. Specifically, the Senators found themselves with a powerplay, and Patrick Wiercioch had the good sense to fire a point shot at a screened goaltender. Anders Nilsson couldn’t hold onto the puck, and Chris Neil raised absolute havoc in the crease. This cause the puck to roll out into the slot, where Milan "oh, this is a contract year?" Michalek calmly pulled the puck around the scrum and slid it home. And just for a minute, the Sens had life.

Of course, it didn't last for long. And the reason it didn’t was all too predictable. Eric Gryba took an unnecessary penalty, and the Islanders scored. And just like that, the Senators had only a few minutes to save the season.

There were chances, of course, but ultimately the clock ran down and with it the Senators’ season, briefly resurrected, was once again laid to rest. Requiescat in pace. May we never see another one like it again.

The Senators didn’t start well and didn’t play particularly well, and Craig Anderson kept the Senators in the game for much of the night. If Andy had played the entire season in his current form, we’d be worrying about our playoff opponents and not how good Anaheim’s draft pick would be.

There were a number of small plays tonight that displayed the extent of Mika Zibanejad’s talent and hardwork. He drew penalties by driving to the net. He stole the puck several times, including a crucial steal with under a minute left that prevented an empty net shot and set up a rush for the Senators. This kid can play hockey. Maybe we should send a few more guys down to Bingo next fall.

Did anyone else groan when they saw Chris Neil had had a hand in the Senators’ goal? Regardless of whether you like Chris Neil and his style of play, the guy should not be on the powerplay. The fact that it occasionally leads to a goal does not prove otherwise. But of course, with less than a minute left to play, the goalie pulled and a faceoff in the offensive zone, there was Chris Neil on the ice again. Simply put, there are other players who should be on the ice when you need a goal to save the season. Failing to see that is an issue.

I have two major problems with Paul MacLean this year. The first is that he doesn’t seem to learn from his mistakes. The second is that his team is slow to learn from their own. I think Paulrus has to wear the blame for both of these problems. It will be interesting to see if he can change his stripes for next season.

I like Zack Smith, but someday I would like to recap a game in which he doesn't take a bad penalty in the offensive zone. This time it cost the Senators a crucial goal that would put them on the back foot for most of the game. Inexcusable, particularly when it happens so often. 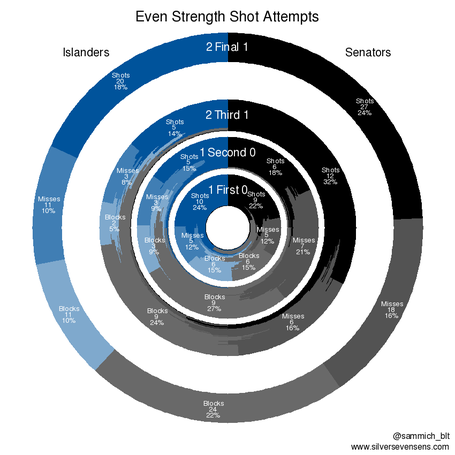