Share All sharing options for: Senators Beat Penguins 3-2 in Shootout to Finish Season

The Ottawa Senators visited Pittsburgh for the Sens final game of the 2013-2014 season. With an eye toward the playoffs, several Pittsburgh players, including Sidney Crosby, did not dress. With Pittsburgh's seeding already set, the main narrative going in to tonight's game was centred on Jason Spezza's possible final moments as a Senator. It felt like a "just try not to get hurt" game with nothing much happening until about midway through the period when Chris Neil and Tanner Glass engaged in a spirited tilt. Both received fighting majors, though Neil left to repair a cut just under his eye. Late in the period Milan Michalek took Ottawa's first penalty of the game. While on the man-advantage, Jussi Jokinen tried to feed James Neal in front of the net. However, the puck never got to Neal, deflecting off Eric Gryba's skate and beating Robin Lehner five-hole. Ottawa got an opportunity to equalize when Harry Zolnierczyk hooked Kyle Turris. It would be Turris who would make Zolnierczyk pay, finding twine with a one-timer from the circle. The period ended with some confusion. Erik Karlsson was caught in the face with a high-stick with ten seconds left. Despite the blood, the infraction was missed. However, Colin Greening was assessed a roughing penalty on the play, the bulk of which would be served following the intermission. The period ended tied at one, shots 9-6 in favour of Ottawa.

With Greening in the box to start the second, the Penguins got to work on the power play. Pittsburgh had some decent zone time, but Ottawa was able to kill off the Greening penalty without much trouble. Five minutes into the period, Pittsburgh retook the lead off a faceoff in Ottawa's zone. Beau Bennett's shot was tipped in front of Robin Lehner by Lee Stempniak. Stempniak, who was covered by Patrick Wiercioch, was able to get his stick free and record a goal. Both teams got into some penalty trouble in the second. Erik Condra took two consecutive minors, but fortunately for the Ottawa winger, Pittsburgh could not capitalize. Ottawa tied the game with Chris Kunitz in the box for hooking. Patrick Wiercioch fired a puck from the blue line at the Pittsburgh goal. The rebound eventually made its way to Mark Stone, who notched a wrist shot equalizer. The period ended tied at two. Shots 22-17 in favour of Ottawa.

The third period was a little sluggish. The first half of the period was punctuated by a thunderous Eric Gryba hit along the boards. Ottawa received its fifth powerplay chance midway through the period when Craig Adams went to the box, but were unable to take the lead. The period's most notable activities were scrums and roughing. With the game still tied at two, the teams went to overtime. There were chances, but neither team could score. The game headed to a shootout. Lehner stopped both shots he faced and after Kyle Turris had already scored, the Captain came through and secured the victory for Ottawa with a highlight reel shootout goal. Ottawa wins 3-2 SO. Shots 33-28 in favour of Ottawa.

This might have been Spezza's last game as a Senator. If so, he's had a great career in the capital. He had four goals in his final five games and ended the season with an excellent shootout winner.

Both of Ottawa's power play units looked threatening tonight and recorded two goals. With the Penguins playing a physical game, Ottawa was given the opportunity to punish an undisciplined team and took advantage of it.

Stone scored a goal tonight and had a few good scoring chances while looking dangerous around the net on the power play.

Kudos to Lehner for finishing the season strong after a mostly poor 2014. Lehner was good again tonight, finishing with a 92.9 save percentage.

Condra is usually a great penalty killer. Unfortunately he couldn't help with that chore in the second period because he was in the box serving consecutive penalties. They were uncharacteristic and lazy, not what we've come to expect from him.

It's been a tough season, but thanks to all of you who have stuck it out on the GDTs and recaps!! 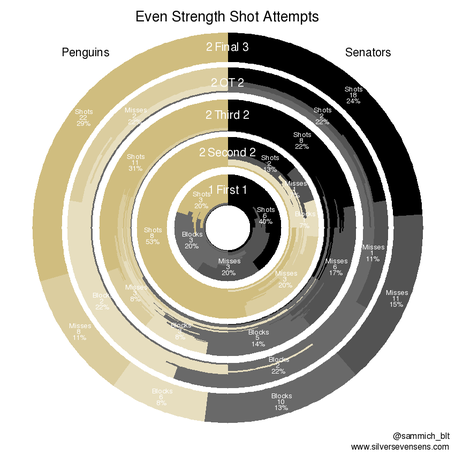