Share All sharing options for: Sens win Bleh-ttle of Ontario

This wasn't the Senators' last game of the season – that will be tomorrow against the Pittsburgh Penguins – but the game carried a certain sense of finality. It was partly because this was the last game of the season that anyone will really care about, since the provincial rivalry still has enough tooth in it to inspire some interest in fans of both the Ottawa Senators and the Toronto Maple Leafs. It was also the last regular season Hockey Night in Canada under the CBC's full control (and good riddance!), with Rogers set to take over next season.

This was not a game anyone will be talking about next season. It will probably be largely forgotten by tomorrow, except maybe by Leafs fans disappointed at their team’s tepid display. But it happened, and as with most "Battles of Ontario", I spent the game outraged at bad calls by the officials and perceived slights by the bonhommes at the CBC. The following recap was written from the swirling depths of that red mist.

The first period featured some excellent play from the Turris line, some good Senators powerplay action, and the sort of mind blowing incompetence from the officials that has become the only certainty in the Battle of Ontario.

Most of the early chances went to the Senators, including some particularly nifty chances for Erik Karlsson and Clarke MacArthur.  Each of those chances was created by Mark Stone, who has seemingly become the new powerplay quarterback from an unusual spot at the left side of net.

The Leafs actually "scored" first, but the puck was approximately 12 feet off the ice when Tyler Bozak tapped it down into the net. For the first and only time in the Battle of Ontario this season, a referee made a correct decision that would benefit the Senators: the goal was waved off.

However, any suspicion that the referees would competently and impartially enforce the rules of the game was eliminated by a series of lousy decisions, each of them favouring the Centre of the Hockey Universe:

· First a Mark Methot goal was waved off for no good reason. By mine and CBC's understanding, it was waved off for goaltender interference AND being played in with the hand. Neither of these things had happened. Only the latter of the two is reviewable, so a call to Toronto accomplished nothing but a delay.

· Shortly after, James Reimer got a beneficial whistle when he lost his glove trying to punch Erik Condra. I understand that the referees are trying to protect the goalies, but maybe that shouldn't include situations in which the goaltender has lost a piece of equipment by throwing it at someone.

· Finally, before the end of the period Patrick Wiercioch was penalized for being hooked by Phil Kessel. I know these things are sometimes 50/50 affairs, but this one was not.

The period finished 0-0, with the Senators having scored the only goal.

I just wanted to take the time to acknowledge the new Budweiser commercial that shows a multitude of fans celebrating in a square that looks an awful lot like Maple Leaf Square and a bar that looks an awful lot like Toronto's Real Sports Bar. The commercial was mostly noteworthy for the fact that the ecstatic fans in the commercial are celebrating a Game 7 win. Given that the only Game 7 enjoyed in those particular milieus is memorable for the home team suffering the most embarrassing loss in NHL playoff history, it was really hard to tell whether Budweiser is trolling Leafs fans or trying to offer them an appealing alternative history. It would piss me off either way if I were a Leafs fan. Since I am not, I enjoyed it immensely.

The most notable stretch of the period occurred when the Senators trapped the Leafs in their end for an extended period, which led to two good things: Colin Greening burying a tired Dion Phaneuf in the corner with a clean hit; and, with fresh skaters attacking tired ones, the Senators were able to draw an almost-inevitable hooking penalty.

On this powerplay, the Senators would not be denied by any goalie or theoretically neutral league official. The goal came after a nice series of passing, with Jason Spezza lofting a peach of a saucer pass right across the width of the ice to Ales Hemsky, who passed it back to Erik Karlsson, who passed it back to Spezza, who fired an absolutely laser off the post and into the net. 1-0 Sens.

Of course, an egregious call against the Senators would soon follow. A good scoring opportunity for the Senators was negated by a "goaltender interference" penalty against Jason Spezza, who was nowhere near the crease and may have grazed James Reimer. Fortunately, the Leafs didn't score on the ensuing powerplay; in fact, they somehow looked worse than they had in the insipid minutes leading up to it.

The last good chance of the period went to Mark Stone, who is making a habit of getting into great positions and missing the net. Clarke MacArthur had forced a turnover over at the Leafs blueline, leading to a dangerous Kyle Turris shot and a rebound rolling onto Stone's stick as he drove to the net. He fired wide. I love this kid; I just need him to calm down a bit on the big chances. I believe it will come.

I used to have a mindless government job, and I remember watching the clock tick down on Friday afternoon in the summer when I just wanted to go hit a patio. That's basically that the third period felt like.

After five minutes that I already don't remember, Milan Michalek had a clear breakaway on which he was completely foiled by a rolling puck and the steely glare of James Reimer. If he got a shot it wasn't a good one.

Still, the Senators were rolling along pretty nicely until back-to-back penalties to Chris Neil and Milan Michalek led to the inevitable 5v3 powerplay that the Senators seem to give up every game. They almost paid for it too, when a shot off the inside of the post deflected across the goal and into the corner. Notably, the Sens also had a good chance of their own when Jean-Gabriel Pageau stole the puck and used a burst of speed to put himself through on a breakaway, though he was unable to finish off his nice work with a goal.

The Leafs put on a bit of pressure at the end of the game, and the Senators had a few odd-man rushes in result (Erik Karlsson seemed especially interested in jumping up on the rush).   There were no further goals though.  The Senators won, and in doing so they passed the Leafs in the standings.  Best of all, there is only one game left.  It's almost patio time, my friends.

It was a rough season for the newly-annointed but eternally-embattled Senators captain, and there's a rougher offseason coming. Regardless of what happens, it was good to see him get a game winner against the old enemy.

He just keeps getting better every game. If Milan Michalek doesn't come back next season, I'm pretty sure I know where the Senators are going to find their new top-6 forward.

He didn't have the season we'd hoped he might, following on his successes in last year's playoffs. It is nice, though, to see him come in and put in a good shift at the end of the season. He was noticeable on the fourth line despite limited minutes and limited linemates, which is always impressive, and he also helped out on the penalty kill. Hopefully we get to see more of this kid next year.

The Leafs were physically present but metaphorically absent. The only reason this was even a contest was impressive play of James Reimer. I'd be indignant as a sports fan about the Leafs effectively quitting now that they're out of the playoffs, but this was exactly how they played down the stretch. 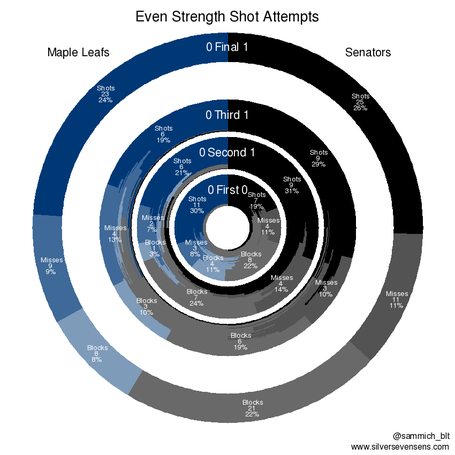