A recap of Thursday night's game between the New Jersey Devils and Ottawa Senators.

Tonight's game between the New Jersey Devils and Ottawa Senators meant nothing in terms of the 2014 playoff race; both teams were eliminated earlier this week. However, for the Senators it marked the end of an era, as it was the last regional game for Sportsnet, the end of a 16-year relationship. Despite two New Jersey penalties in the first half of the period, Ottawa could not grab the game's first goal. Midway through the period, Mark Stone snatched-up an Adam Larsson pass in the New Jersey zone and had an excellent opportunity to get the Sens on the board, but Cory Schneider was equal to the task. Other than a last-minute flurry by the Devils, it was a solid period for the Senators. Shots 10-8 in favour of the Senators.

The second period started more evenly. The Devils had a fantastic 2-on-0 deep in Ottawa's zone as a result of a Sens turnover, but played it poorly and Robin Lehner was able to make the easy save. Just when the game hit a lull, Marek Zidlicky hooked Ales Hemsky who had broken through the Devils' defense. Hemsky was awarded a penalty shot, but somewhat surprisingly, it was a poor effort, resulting in a relatively routine save for Schneider. No matter, as an excellent rush by Mika Zibanejad resulted in Mike Hoffman's third goal of the season shortly after the Hemsky miss. It was a nice top shelf goal for Hoffman, but Zibanejad's rush and vision made it happen. With a delayed penalty on the way to Eric Gryba, New Jersey was able to equalize with an extra skater on the ice, on a Michael Ryder goal. It was a nice period for Zibanejad and Hoffman, who continued to press offensively after Ottawa's goal, but the Devils also offered more in the way of offensive chances in the second. The period ended tied at one. Shots tied at 20 each.

The third got underway with a Zack Smith penalty. Ottawa was able to kill it off and the period settled into the same predictable rhythm of the earlier two periods. Midway through the frame, Lehner robbed New Jersey's Patrick Elias with an excellent save. Ales Hemsky took a lazy tripping penalty in the second half of the period. Fortunately for the newest Senator, some excellent penalty killing from Erik Condra and Smith helped keep the Devils at bay despite increased Jersey pressure. After killing the Hemsky penalty, the Sens pressured the Devils for the remaining five minutes, with a few good chances to win the game. A save from Lehner in the dying seconds of the period ensured the game would head to overtime.

Overtime kicked off with an early 3-on-1 for New Jersey, but Lehner turned away the Jaromir Jagr wrist shot. Ottawa couldn't convert on chances by Erik Karlsson, Jason Spezza, Turris, and MacArthur. A late 2-on-0 for Jagr was denied by Lehner with a game-saving block. Ottawa squandered an opportunity to win the game as the Sens finished OT on the power play, and the game went to a shootout. Excellent saves from Lehner and Schneider meant an extra shooter for each team. Erik Karlsson was the shootout hero for the Sens, converting on a ridiculously awesome attempt. Ottawa wins 2-1, SO. Shots 39-32 in favour of New Jersey.

The duo had a good game, with several scoring chances, and they connected for Ottawa's first goal on the night. They were particularly good in the second period and Zibanejad also chipped in on the PK.

Stone looked great tonight. He had several great chances and looked a threat to score all game long. It was great to see him put in a position to succeed on Ottawa's top line. MacArthur and Turris did what they've done all season long: play a consistent, offensively threatening, reliable game.

Lehner had a fantastic evening. Any other night and he would be a Sens hero. He made several big saves in regulation and was only beat when New Jersey had six attackers on the ice. Lehner was also a wall in the shootout, stopping Travis Zajac, Adam Larsson, and Jagr, before Zubrus missed the net. Lehner was peppered again tonight, and stopped 38 of 39 shots, for a .974 SV%.

A quiet night for Karlsson ended with a bang. He wasn't that noticeable at either end of the rink through 60 minutes, but he turned things up in OT. He then went to 11 in the SO, with a truly ridiculous and beautiful deke and top shelf snipe. Seriously, go back and watch the highlights.

This would have been a much different game if Martin Brodeur had started his final (hopefully) game in Canada. Instead, Schneider got the start and mostly shut the door on the Sens, making 31 saves. He looked great in OT and made some key saves in the SO before Karlsson secured the Ottawa victory.

Sens Heroes: The Sportsnet Broadcast Team (past and present)

Tonight was the last night for Sportsnet's regional coverage of the Sens. The hockey broadcast landscape is going to look a lot different next year, but tonight was a final chance to reflect on one of the longest relationships in team history. There were things I didn't like about Sportsnet's coverage of the Sens (especially the one-size-fits-all intermission panels), but there has also been a lot of good over the years. The network's coverage of the team is familiar for long-time fans and fandom-defining for younger supporters.

As fans, our focus is usually on players and team achievements. As it should be. But it's moments like this that make us realize how much a part of our game day experience play-by-play personnel, analysts, and interviewers are. With someone like Dean Brown, game day experience quickly became annual experience. After all of these years, his calling conventions have become our conventions. Simply put, his vocabulary and tone have become how the Sens sound to thousands of viewers.

On a personal level, my connection to this team has been mediated by people like Dean and Ian Mendes. Some of my earliest blogging attempts tried to describe how that relationship between fan and Voice impacted me. While TSN will surely bring many highs for Sens fans, I'm glad we had one last win with Dean and Denis, and a chance to say thanks for the memories. 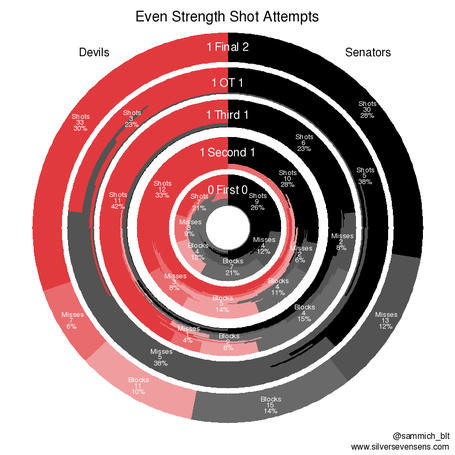