Coach Paul MacLean made a couple line-up changes ahead of Saturday afternoon's tilt against the Winnipeg Jets. Jared Cowen drew back into the line-up in place of Patrick Wiercioch and Matt Kassian filled in for Clarke MacArthur, out of the line-up with an injured hand. In addition, Senators goaltender Craig Anderson made his fourth straight start between the pipes for Ottawa. The Senators had a couple chances to start the period, but an early interference penalty to Eric Gryba put Ottawa on the penalty kill. The Sens were tested when Colin Greening also took a penalty a minute into Gryba's minor. Greening was careless with his stick, clipping Jets sniper Evander Kane in the face. The unit of Marc Methot, Chris Phillips, and Zack Smith did well to prevent several pucks from getting through, and Craig Anderson made a couple nice saves. The Sens killed off the 5-on-3 and the Winnipeg advantage was neutralized when Tobias Enstrom tripped Smith.

While the Sens weren't able to capitalize on the team's first powerplay a second advantage in quick succession led to Ottawa's first goal of the game. A nice breakout by Jason Spezza led to some nice passing between the captain and new winger Ales Hemsky. With Milan Michalek driving the net, a bouncing puck managed to cross the goal line. Michalek was credited with the goal and Hemsky picked up his first point as a Sen. An ill-timed Chris Neil penalty late in the period sent the Jets to the power. With Michalek over-committing along the boards, neither he nor Methot were able to block the shot from the point. While Andy stopped the initial shot, the rebound bounced right to Bryan Little. Erik Karlsson wasn't able to wrap up Little in front of the net and Little slide the puck past Andy. After a strong period, Ottawa deserved more than to go into the intermission tied, but fortunately, Jared Cowen helped his teammates out. Yes, Jared Cowen. Less than a minute after the Winnipeg goal, Cowen took a nice feed from Hemsky and the big blueliner's slapshot slipped past Ondrej Pavelec. The lead restored, Ottawa entered the first intermission up by one.

The second period started with some jump from the Jets. An absolute bomb from Jacob Trouba caught Andy in the shoulder. In visible pain, Andy was shaking off the effects for the rest of the shift. On the same shift, a turnover by the Jets was scooped up by Hemsky and he and Spezza were off on a 2-on-1. Not surprisingly, Hemsky fed Spezza but the pass was partial blocked by the Jets defender. I don't really know what happened next. Pavelec and a defender ended up on the ice behind the net and Spezza passed it out in front of the open net. The pass went off Michalek skate to the trailer Gryba, who put it into an empty net, before sliding into the end boards with a Winnipeg defender and knocking Hemsky over in the process. The two-goal advantage didn't last long, as a Cowen penalty sent the Jets back to the power play a couple minutes later. Tobias Enstrom's slapper from the point got through the traffic in front of the net, and the Jets were within one.

Things got a little nasty after. At the five minute mark Eric Tangradi hit Erik Condra, catching him in the head. The commentators discussed if it was an elbow (it wasn't, which doesn't really matter) and that it wasn't boarding (which it wasn't). It was called charging, and while it might have been a little late, it was a shoulder/arm to Condra's head. Some might argue Condra turned into it, but I'm not a fan of blaming the victim. Regardless, it led to fight a fight between Cowen and Anthony Peluso. A few minutes later, an excellent individual effort by Mike Hoffman down low was completed with a pass - while lying on the ice - to Kyle Turris, who calmly flipped it over Pavelec's shoulder for a goal. It was Hoffman's first NHL point and it was a beauty, even if the effort from the Winnipeg defense and Pavelec was terrible.

Frustration crept into Winnipeg's game after Ottawa's fourth goal. Devin Setoguchi hit Smith from behind and took a deserved boarding penalty. Less than a minute after record his first NHL point, Mike Hoffman scored his first NHL goal on a nice passing play with Spezza and Hemsky. After a disappointing afternoon, Pavelec was pulled in favour of Al Montoya after Ottawa's fifth goal. Despite being up 5-2 and despite both Jets goals coming on power plays, Ottawa took two more undisciplined penalties (one from Smith and one from Kassian) to try and give the opposition some life going into the intermission. The Kassian penalty was particularly stupid as he dropped his gloves and pulled in vain on Tangradi's jersey, trying to start a fight. Whether Kassian was upset because he felt Tangradi elbowed Condra or because Kassian came off a bit worse moments earlier when laying a hit on Tangradi, the result of this attempt to engage resulted in a Winnipeg power play. Fortunately, Ottawa killed off the penalty and entered the second intermission with a three goal lead.

Early in the third period, Dustin Byfuglien got the Jets back into the game, with an absolute blast from the boards. As good as the shot was it was a weak goal from Anderson, who just simply missed the shot. Ottawa sat back and tried to protect the lead for most of the period and Winnipeg turned on the pressure.

Wow. Not all of his assists were pretty, but he had three on the afternoon (and should have had one on the Gryba goal, but the puck struck Michalek on the skate on the way to Gryba). While there was some evidence of Hemsky developing chemistry with Spezza against the Flames, it was on full display in this game. Perhaps most importantly, Hemsky helped drive and generate Ottawa's offense today.

Coach Paul MacLean has given Hoffman every opportunity to succeed this call-up with better linemates and time on the first power play unit. Hoffman delivered with a power play goal and an excellent assist.

Anderson was solid tonight, stopping 46 of 49 shots. Some of that pressure was because of the numerous penalties Ottawa took. A lot of that traffic is because this game was 5-2 in Ottawa's favour with 30 minutes to play. Regardless, while things where often chaotic in the Sens end, not much was getting past Andy's glove hand.

He's had a really rough season but he scored an important lead-restoring goal today. Hopefully that gives him a boost going forward.

Both have performed below expectations this season, but looked dangerous playing with Hemsky. Spezza had three assists and Michalek a goal and an assist on the afternoon. More of that please.

Big Buff notched a goal and an assist for the Jets this afternoon and was Winnipeg's most dangerous attacker in the Ottawa zone. His goal early in the third set the tone for a constant Jets attack. 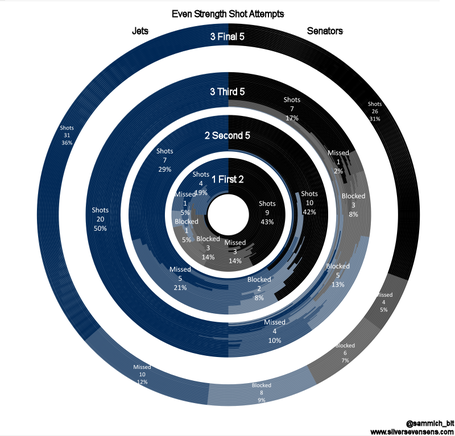