The Ottawa Senators saw their playoff hopes take another hit as they fell 3-2 to the Edmonton Oilers.

Share All sharing options for: Senators lose 3-2 to Oilers before likely doing something stupid at trade deadline

The stories heading into tonight's games were less about the game and more about the trade deadline. Would this be Chris Phillips' last game as a Senator? Who will pick up Cory Conacher on waivers tomorrow? Would this be the last time Joe Corvo is able to expense press level beers on Eugene Melnyk's chequing account? Are the Senators really bad enough to lose both of their games against the Oilers this season?

Only one of those questions would be answered tonight, and sadly, it was the last one.

The first goal of the game came early as Milan Michalek did a great job protecting the puck and snuck out a backhand pass to a nearly kneeling Jason Spezza who made no mistake, giving the Senators a 1-0 lead just five minutes into the game. The Senators dominated possession early -- the Oilers didn't get their first shot until nearly 12 minutes had passed in the period. All that good possession was erased after Cody Ceci took an ill-advised penalty and Ales Hemsky blew past Chris Phillips to put a nifty deke behind Craig Anderson to make it 1-1.

The Senators caught a lucky break in the second when a Colin Greening turnover to Taylor Hall only resulted in a post hit (despite Dean Brown understandably thinking the puck went in the net). But their luck wouldn't hold -- a few minutes later Ales Hemsky took advantage of a Taylor Hall screen and slipped the puck past Anderson. Two goals for Hemsky? His trade value might have risen all the way from "Sell" to "Don't Buy"! 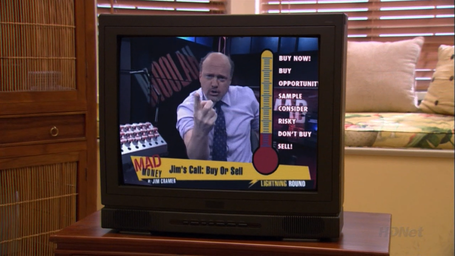 The Senators would have several more chances in the second-- none better than a Clarke MacArthur feed to Bobby Ryan right in front of the net -- but Ben Scrivens was more than up to the task.

The Oilers would go up 3-1 early in third as Jordan Eberle tapped home a Boyd Gordon rebound, and though the Senators kept pressing, the Oilers somehow kept the puck out of their net until Erik Karlsson went coast to coast for a goal with three minutes left. As he does.

While that gave a sweet glimmer of hope to the Senators, that hope quickly faded away when Eric Gryba decided to take a dumb penalty about thirty seconds later. As he does.

The Senators would have a brief powerplay at the end of the game, but failed to capitalize, losing 3-2 to the Oilers. Yes, the Senators lost to the Edmonton Oilers, but they are definitely buyers tomorrow, not sellers.

Sens Killer: Ales Hemsky
The Senators have long been rumoured to have interest in Hemsky, and he showed why today. Hemsky had two goals, and while the second was more because of Hall's great screen than Hemsky's shot, his first goal was a beautiful drive to the net.

Sens Hero: Jason Spezza
Spezza isn't just here because of his goal, but also because of the many other chances he created for the Sens. He seemed to be skating better than he has all season tonight, and he made too many nice dekes to count, none better than the beautiful pass to his skate at the blueline that fooled everyone around him.

Sens Hero: Erik Karlsson
Karlsson had 5 shots and a goal in just under 29 minutes of ice time, so it was a pretty standard night for him.

Sens Zero: Paul MacLean
MacLean made a number of puzzling roster decisions tonight, the strangest being his usage of Bobby Ryan, who played just 14:35 in the game. That's almost a minute and a half less than Milan Michalek had, despite Ryan finishing with 4 shots in that icetime. Oddly enough, Cory Conacher was on the ice on the 6-on-4 to finish off the game, while Bobby Ryan was not. Strange.

Sens Killer: Ben Scrivens
The Professor had a great game, allowing just 2 goals on 36 shots. The Senators outshot the Oilers and had a ton of great chances, but Scrivens kept his team in it, earning that new contract extension.

Too many passes: Mika Zibanejad
Mika had a good game for the most part, but there were about five different situations where he chose to make a pass when he could have shot it from the slot. In all of those situations, the pass seemed to not connect and the Senators missed out on good scoring opportunities. 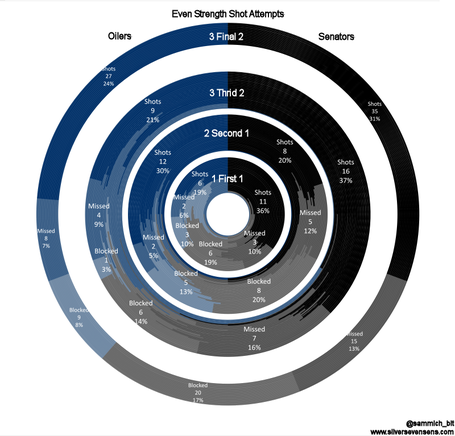