Ottawa's March to the Playoffs 2014™ continued with a hard-fought shootout victory over the Carolina Hurricanes.

Share All sharing options for: Ottawa squeaks past Carolina with shootout victory

The Ottawa Senators faced off against the Carolina Hurricanes on Monday night in the enviable position of being able to truly make up ground on teams they're chasing in the playoff race, as few other teams were in action. If the Sens were to keep their microscopic post-season chances alive, a win was a virtual necessity. Thanks to some solid play from veterans Ales Hemsky and Craig Anderson, newly-minted assistant captain Kyle Turris, and youngsters Patrick Wiercioch and Mika Zibanejad, they managed to secure a 2-1 shootout win and put two more points in the bank.

Things got off to a great start for Ottawa when Ales Hemsky corralled a loose puck to set up Patrick Wiercioch at the point, and Wiercioch's laserbeam was tipped past Cam Ward by Mika Zibanejad in front. But a brutal giveaway by Erik Karlsson gave Jeff Skinner the opportunity to bank the puck into the net off of none other than Erik Karlsson, which tied the game after just a few minutes. Although Ottawa controlled most of the play and generated oodles of chances, it would end up knotted at aces.

More chances were had in the second frame, and Ottawa doubled up the 'Canes in shots despite taking two penalties--but the Sens couldn't get anything in, and the tied score carried forward.

The goaltending battle continued through the third period and overtime, but... still, no goals. The teams were off to the shootout.

... in which Craig Anderson just took over, stopping all three shots faced convincingly and propelling the Senators to their third straight win.

The victory was Ottawa's third straight, and they've now got nine points in their last five games. Although SportsClubStats still rates their odds of making the playoffs at under three per cent, it looks like the Senators are going to do everything they can to make it an exciting finish.

Sens Hero: Ales Hemsky
Hemsky was like magic tonight... he and Mika Zibanejad worked very well off one another, with each others' speed and slick hands complementing nicely. (Milan Michalek was kind of along for the ride.) Hemsky had an assist and scored the shootout winner, too. Right now, he looks like one of the Senators best deadline-day acquisitions ever--perhaps second only to the next guy...

Sens Hero: Craig Anderson
Although he wasn't asked to make many ridiculous saves in this one, there were plenty of good scoring chances for the Hurricanes, and Anderson was there to stop nearly all of them. His only imperfection was a total fluke he could have done nothing on. The shootout dominance more than made up for it.

Sens Hero: Patrick Wiercioch
Ottawa's best defenceman on the night (weird to think), Wiercioch had a great game in all scenarios--even strength, powerplay, and even short-handed. Although he wasn't technically credited with a shot on net, his shot got Ottawa their love regulation goal, and he led the Sens defence with a +8 corsi. Maybe he was helped by the fact that Carolina isn't really a big team so they didn't challenge him physically, but Wiercioch made a statement nonetheless--we'll see if it was one that convinced MacLean.

Sens Heroes: MacArthur-Turris-Stone
Hot on the heels of Turris' first-star-of-the-week honours, this line had yet another dominant performance--especially in the first half of the game. They slowed down a bit towards the end, but still generated the lion's share of Ottawa's scoring chances and zone time. Mark Stone continues to look impressive on this trio; it's going to be interesting to see where he'll fit on the roster next season, because he's proving himself an NHL player.

Sens Zero: Erik Karlsson
On top of the giveaway that resulted in Carolina's goal, Karlsson also had a few other bad giveaways and was soft on the puck for most of the game. He also nearly killed Clarke MacArthur with a random knucklepuck-pass-attempt in the third period. While he may not have been a zero by normal standards, Karlsson was a zero by Karlssonian standards--the Sens need him to do more than he did in this one. 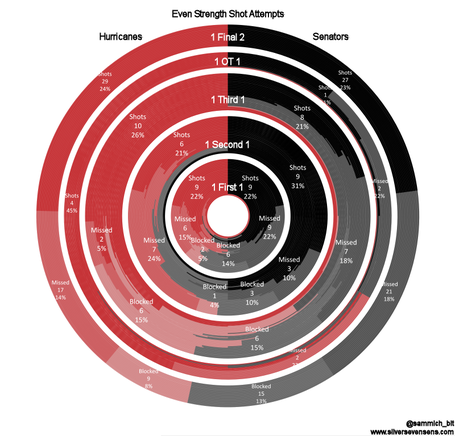