I went to the Heritage Classic. It was a good time. I decided to put together a thing on the experience.

Yesterday afternoon my wife treated me to the Heritage Classic. Her being a diehard Canucks fan and myself a diehard Senators fan made for an interesting experience as normally we're happy to pull for each others' teams. Today was war. A friendly war. More like a game of Risk before Risk actually begins. 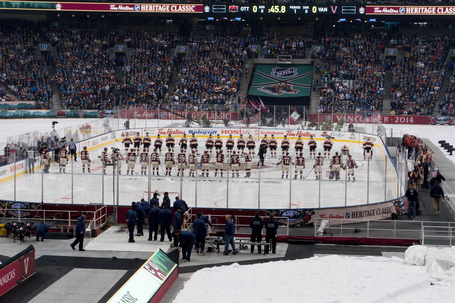 Everyone be quiet. Sarah McLachlan is singing.

The Game Itself: Not the greatest game from an entertainment point-of-view, but it was nice to see a win even though it made my wife unhappy. Our seats were 27th row behind the Senators attack twice zone. The distance of the rink from the stands gave us a low angle view where you couldn't see behind the boards. Not the best for seeing the game, but great seats to enjoy the experience. The jerseys for both teams looked spectacular in person. Easily one of the best-looking, if not the best, games I've ever been to in that regard. Identifying players was tougher than a normal game because of that distance. It reminded me of being in the front row at a Swedish game in Gothenburg when there was a gap between the seats and the rink, except even more exaggerated. 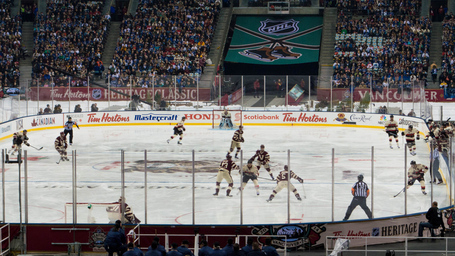 Senators Fans: I've never seen so many Senators fans in Vancouver in the nearly 10 years I've lived here. Some definitely came from afar, others lived here. One man was wearing a Senators jersey while his 3-year old son was wearing a Canucks jersey. The few and the proud were sometimes loud, but often quiet as games in Vancouver tend to be. There were lots of high-fives and fistbumps as we all walked by one another. It was lovely for once to be around my fellow Senators fans in my adopted home. Lots of smiles as everyone exited the building. Only got chirped once for my Robin Lehner jersey. A man in a Turris jersey reminded me of how many goals Lehner had let in recently. He had no response to my question about Cowen's culpability on them. 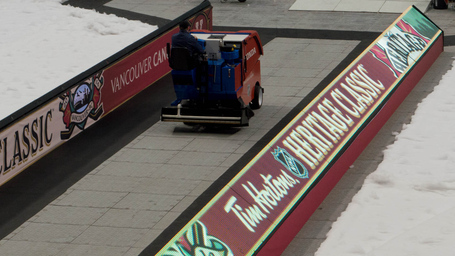 Canucks Fans: Fans in Vancouver have a bad reputation that I don't think is deserved. 90% of the fans at least at the game were great. I got some jeers and boos when I shouted "go Sens go." Nothing a typical road fan wouldn't get, aside from one incident. Canucks fans are generally good people and tonight was another mostly positive experience. I'm not sure how audible it was on television, but the crowd was really giving it to the team for not starting Roberto Luongo. Poor Eddie Lack had to listen to chants of "we want Lou" all game long. Lack is normally beloved by Canucks fans. He even has a song. This was very much a protest against the team and not Lack, but it sounds like he might have been a bit hurt by it. 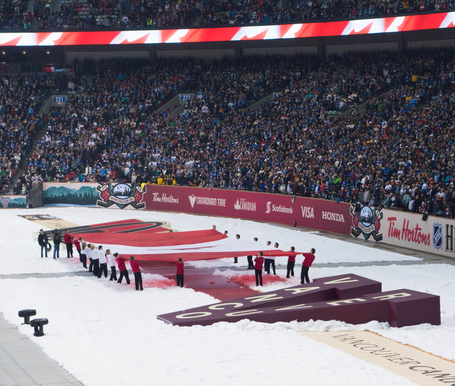 Giant logos and flag during the anthem.

Kids at the Game: This was the perfect event to bring kids to. A spectacle that would stick with them for years to come. I had two kids sitting next to me, probably six and five. Both Canucks fans. One of them kept shouting Ottawa sucks, even once he realized what jersey I was wearing. As the game went on, both the boys started talking more with me. One was shocked when I said I'd been a Senators fan for over 20 years and also couldn't figure out why I would cheer for a different team when I live in Vancouver. At one point the other boy said he thought the score needed to be "rearranged." One of them had a Kesler jersey. He's going to be devastated. 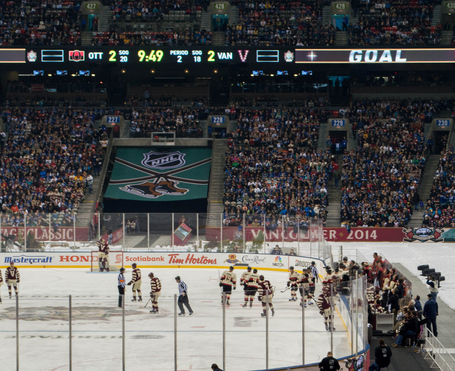 The Outdoor Experience: It was rainy and gross outside while walking around. Not pouring, only just enough to be annoying. It didn't stop the fans walking around the festivities from having a good time. I saw a poor sap in a Jared Cowen jersey and snuck a photo. He must have been disappointed. The fan festivities themselves weren't overly exciting. A couple beer gardens, some advertising tents, and a stage with two pretty neat inflated Ottawa and Vancouver jerseys. Before Journey started blaring, there was a fiddle playing and some middle age fans doing jigs. The best part was the grilled cheese truck. Sourdough with applewood smoked cheddar and bacon and oh my goodness it was delicious. 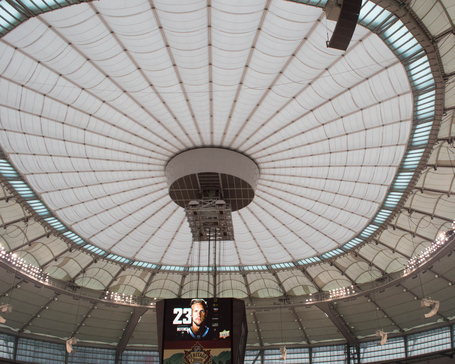 This is what an indoor outdoor game looks like.

The Indoor Experience: It was disappointing that the roof was closed but they still lit the place like it was outdoors. The rain wasn't very nice (you lied, "light rain" forecast) so it's understandable that it wasn't open. Still disappointing. The ground was littered with fake snow to give the illusion of an outdoor rink, and at least inside it worked quite well. One odd recurring event was a single man walking in and out with a wheelbarrow, empty until he filled it with fake snow before going back inside the hall. Most of the merchandise for sale was Canucks gear, but there was at least one kiosk with a smattering of Senators jerseys (mostly Erik Karlsson and Bobby Ryan) and hats.

Most Obscure Jersey Sighting: Amongst the large collection of Erik Karlsson jerseys were a few oddball ones. A lone Matt Carkner was in my section, but that was nothing compared to the Magnus Arvedson. And then on the way home, a man in a #14. "Greening or Campoli?" I asked. "Campoli, hell yeah." 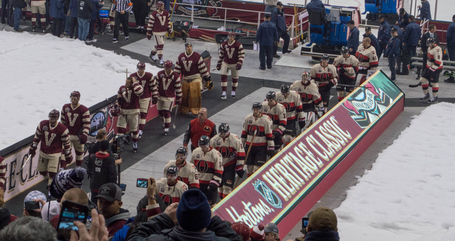 We were really close to the entrance.

Highlight of the Afternoon: During a commercial break, an advertisement starring Mark Messier came on the big screen. If you aren't aware, Mark Messier is to Vancouver like Dany Heatley is to Ottawa, but times two. Messier is loathed. The crowd erupted in boos. Far and away the loudest moment of the event and it wasn't even close. 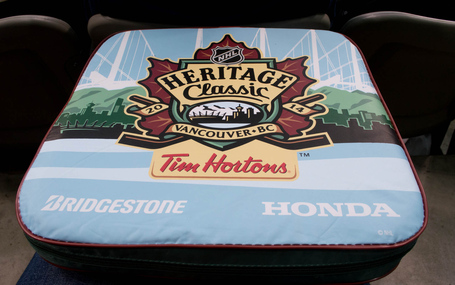 This is what was thrown at me.

Lowlight of the Afternoon: The wave that went around six times in the middle of play. Make it stop. After the Colin Greening goal, someone a few rows behind me threw a seat cushion at me while I was standing and cheering. A close second was the security guard who wouldn't let us walk down to the front row to get a photo just before the end of the second intermission.

Overall this was a great experience, one I'm very glad I was able to attend as a fan. Even though it wasn't technically an outdoor game, seeing a hockey game in a crowd that large is a different atmosphere that should really be experienced if you get the opportunity.

(A special thank you to my wife Alix for taking these photos in this post.)