A recap of Friday's game between the Chicago Blackhawks and the Ottawa Senators.

Craig Anderson made his return to the line-up tonight against the Chicago Blackhawks after missing seven games and almost three weeks of action. Chris Phillips remained in the press box, giving Patrick Wiercioch another start. The talk heading into the game was about two former Norris winners facing off against each other: Duncan Keith (2010) and Erik Karlsson (2012). Midway through the period, Clarke MacArthur drove hard to the net and continued into Chicago goalie Antti Raanta, taking a goalie interference penalty. A terrible giveaway from Keith seconds into the power play was recovered by Zack Smith who fed Erik Condra. Condra channelled his inner-anyone-else and snapped a shot top corner for the game's first goal.

On the same kill, Mika Zibanejad snatched a puck at the blue line and raced for the Chicago zone, but the Hawks were able to recover. The Sens killed the penalty, but the game was delayed for a couple of minutes when Raanta took a Jason Spezza shot to the back of the knee. He was in a lot of pain, but stayed in the game. The game resumed and was quickly halted again, for a Chris Neil-Brandon Bollig fight. With five minutes to go in the period, Ottawa's captain took advantage of a Hawks giveaway and bad change, and entered the Chicago zone on a 2-on-0 with Milan Michalek. Raanta made a nice save on Spezza and Michalek wasn't able to put the rebound passed Raanta. A last minute shot from Cody Ceci was deflected by Hawks rookie Matt Carey, who was playing his first NHL game, past Raanta. It was Ceci's third of the season and sent Ottawa to the break with a two-goal lead. Shots 14-13 in favour of Chicago.

The second period started with a bang after a nice passing play between Hemsky and Spezza. Spezza fed a waiting Michalek at the side of the Chicago net, and the winger tipped it past Raanta for Ottawa's third goal of the night. However, 30 seconds later, Chris Neil took Ottawa's second goalie interference penalty of the game. Fortunately for the man wearing the ‘A', the Sens killed off his penalty. Chicago's pressure increased as the midway point of the period neared. Chicago's pressure increase was inevitable, the Hawks had a poor first and Ottawa started to rest on its lead. Jared Cowen took a penalty as he tried to tie-up Patrick Sharp in front of the net. With Cowen in the box, Sharp picked the puck up in his own zone and carried it through the neutral zone before dishing to Jonathan Toews on the side wall. Sharp broke away from lax coverage (Michalek) and wasn't picked up by Erik Karlsson as he drove the Ottawa net. Toews returned the puck to Sharp, who tipped it passed Anderson.

Chicago continued to pressure Ottawa, and the Hawks dominated possession for most of the period. Things got a little heated late in the period when Chris Neil hit Niklas Hjalmarsson and both needed a few moments to recover. It was a borderline hit, which Hjalmarsson felt was late and knee-on-knee and Neil felt was the result of Hjalmarsson trying to step out of the way. Chicago scored its second goal as a result of a fantastic individual effort by former Senator Marian Hossa. Marc Methot made a terrible giveaway in his own zone and his backhand pass went straight to Hossa in the slot. Karlsson was unable to knock the puck away and as Anderson stretch his leg across the crease, the Hawks winger managed to slip the puck between Andy's skate and the post. The period ended with Ottawa leading by a goal, 3-2. Ottawa was outshot 23-5 in the second. Shots 37-18 in favour of Chicago.

The third period started with Ottawa trying to deal with the early pressure from Chicago's Toews line. Things improved for Ottawa when Matt Carey was called for a delay of game/face-off violation penalty in Ottawa's zone. Chicago didn't like the call and Ottawa made the Hawks pay. MacArthur was denied on the rebound from Patrick Wiercioch's shot, but Kyle Turris sent a wrist shot into the open Chicago net. Ottawa added another goal after a nice takeaway by Mark Stone led to a break for Clarke MacArthur. MacArthur capped his game with an excellent deke and beat Raanta.

Ottawa got into some penalty trouble during the later stages of the period, as Cowen took an interference penalty and Eric Gryba took a slashing penalty to give Chicago a 5-on-3 advantage. Despite some chances in close for Chicago, Ottawa was able to kill the Cowen penalty (thanks in no small part to the play of Anderson). Fresh from the box, Cowen picked up broke into the Chicago end, beating Raanta to the loose puck, but unable to control it.

The Cowen-Raanta collision was over shadowed by a scuffle between Zack Smith and Andrew Shaw. What began in front of Ottawa's net carried on up the ice as Smith gave Shaw a few taps/hacks on the leg. Shaw responded with frustration and speared Smith in the gut. Both received minor penalties and Shaw was correctly assessed a spearing major and game misconduct. The Sens spent the final three minutes of the game on the power play and managed to give up a shorthanded goal to Brent Seabrook, on a weird shot that Andy didn't track and trickled behind him. Sens win 5-3. Shots 49-29 in favour of Chicago.

After almost three weeks on the shelf, it wouldn't have been surprising if Andy was a little rusty. That was not the case. While he let in two goals in the second period, Anderson was peppered with 23 shots and kept his team in the game and up by a goal. He was also strong on Chicago's 5-on-3 in the third period. Andy made 46 saves and had a .939 save percentage on the night. The third goal he gave up was pretty strange, but it didn't matter at that point. After struggling post-Olympics, it was nice to see Andy get back in his groove.

MacArthur had four shots on the night, picked up two assists and scored a beauty on a nice deke for his 23rd of the season. The Turris-MacArthur-Stone line looked good all night and MacArthur was a big reason why.

The whole line looked good tonight. Kyle Turris scored his 23rd of the season and both he and MacArthur tied Bobby Ryan for the team-lead in goals. Mark Stone had three shots and two assists, recording his first multiple point game in the NHL. His blueline takeaway was a big part of the MacArthur goal.

Sharp drew the penalty that put Jared Cowen in the box and Chicago on the power play. Sharp then took full advantage of that power play, starting the rush and gaining the zone, before tipping home his 31st goal of the season.

Hossa has always performed against his former team and tonight was no different. His goal, Chicago's second of the game, was a beautiful individual effort.

Keith had a rough night. His giveaways were directly responsible for two of Ottawa's goals and he had a generally rough outing. Keith is a good defenseman, but I enjoyed his tough night for two reasons. One, because Denis Potvin was going on about how great Keith is defensively before the game and that he would choose Keith over Karlsson if he was starting a team. Two, because it illustrates how narrative-driven awards are in the NHL. Keith is a good defenseman who will probably be a Norris-finalist this season. He's had a good year, but if an offensively-minded defenseman made the mistakes Keith made tonight, he would be ripped apart by the media and the gaffs would appear in intermission compilation after compilation illustrating why he doesn't deserve an award.

It Gets Better: Matt Carey

Carey made his NHL debut tonight and the best part was probably when his teammates didn't immediately join him for the pre-game warm-up. Ottawa's second goal deflected off his stick and his third period penalty led to Kyle Turris's goal, which put the game out of reach for Chicago. A tough game for the rookie, but hopefully it gets better from here. 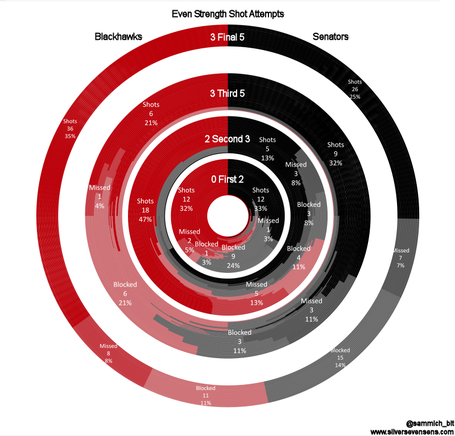