Sunrise Sunset for the Senators

Share All sharing options for: Sunrise Sunset for the Senators

Yesterday I was momentarily confused that we were playing Tampa Bay again before remembering that the Lightning are now our Flortheast division rivals. Despite that fact, they don't really feel like rivals, and I feel the same way about the Florida Panthers. I wonder how long it will take to build that kind of relationship in the new divisions.

Florida games this season have also served as a saddening reminder of the absence of Daniel Alfredsson, who absolutely owned the Panthers throughout his career in Ottawa.

With neither team really fighting for a playoff spot and Ottawa not even eyeing a better draft pick, this game was more interesting for some of the individual story lines:

Interestingly, a number of these guys would play prominent roles in the game. Here's how it happened:

The Senators dominated the first period, but it didn't do them a ton of good. They outshot the Panthers 20-10, but ultimately the period ended scoreless.

Mark Stone had Ottawa's best chance to score as he swooped down at a puck rolling past an open net. Unfortunately Stone, who has exhibited zero luck so far in his NHL career, managed to slam the puck straight into the post. Notably, and as Sportsnet's talking heads highlighted at the intermission, Stone had a few other chances in the period as well, but failed to score on any of them.

Florida probably should have had a goal a few minutes later when the puck trickled past Robin Lehner, with Sean Bergenheim reaching behind him to tuck it into the net. However, Ottawa was the beneficiary of an unusually quick whistle (a wonder, for this team) and Florida's goal was disallowed.

The game was frustratingly delayed around the fifteen minute mark when two bears in full hockey equipment, presumably part of the planned intermission entertainment, escaped and made their way onto the ice. Upon seeing each other, the bears were enraged and quickly became entangled in a brutal bear fight. Though animal lovers watching from home were surely horrified, the Florida crowd was delighted. Luckily the bears quickly grew tired and - with no handlers in sight - the brave linesmen were able to wrestle them off the ice. Thankfully, the game finally able to resume.

The last notable of the period occurred when Clarke MacArthur was robbed on a very good chance goal by a lunging Luongo.

Alas, how to sum up a period in which the Senators effectively summed up their own season ... Perhaps a superfluous Dickens quote?

Things started out pretty well for the Sens, as they got chance after chance and were foiled only by the superlative efforts of Roberto Luongo.

Mark Stone finally broke the deadlock midway through the period. Senators fans were undoubtedly pleased for Stoner, and also for Erik Karlsson, whose assist on the goal extended his point streak to eight games.

A few minutes later the Senators' lead was doubled when Patrick Wiercioch stepped into a shot from the point which Clarke MacArthur tipped past Luongo.  This was, I should mention, a big moment for the brothers and sisters of the #FreeWiercioch movement.

Of course, since everything was going smashingly and the Senators are the Senators, the team found a way to undo all their good work. First Sean Bergenheim scored a much-deserved goal, having already been denied first by the referees and then by the post. It took only 23 seconds for the Panthers to strike again, this time a goal by  Vincent Trocheck, whom I had never heard of before this game and whom I never intend to hear of again.

The Sens even managed to worsen the situation by taking a penalty with 17 seconds left in the period.

So having managed to go up 2-0 on the road, the Senators had managed to blow it all way with 30 seconds of inattention. They were also facing a penalty kill to start the third. This team ...

Surprisingly, Ottawa had the best chance of the period-opening powerplay when Erik Condra found himself on breakaway. Unsurprisingly, it was a vintage Condra shorthanded chance, which means that it was effective at killing time but Roberto Luongo was equal to the challenge of stopping the shot.

The period played out without too much more excitement, with Florida probably the better of the two teams as they slowly made up ground on Ottawa's early game shot differential (the final shots were 41-40 for the Panthers).

With just over five minutes left in the third Sean Bergenheim continued to torment the Senators and be tormented by bad fortune when he again rang a shot off the post, coming an inch from effectively winning the game. But he did hit the post, and the score remained 2-2, and for the second consecutive night the Sens were on their way to overtime.

A few things happened in overtime.

First, Roberto Luongo committed grand larceny (which I understand to be completely legal in Florida) on a Mark Methot shot from the slot that should surely have found the back of the net.

Then poor Patrick Wiercioch had the puck knocked off his stick by Kyle Turris, leading to an unfortunate turnover in the Ottawa zone.  Things just kept getting worse for Wiercioch (and, I would imagine, the #FreeWiercioch movement) when he was assessed a two minute penalty for his proximity to an absurdly obvious dive by Tomas Fleischmann.

Thankfully for Patty W., the Sens were able to kill that penalty, aided in part by a stellar glove save by Robin Lehner.  After 65 minutes the game play had resolved nothing, and a skills competition was needed to settle the score.

I mean, obviously. He's winning my Norris trophy this season.

Stoner was all over the ice tonight, and involved in a lot of the good things that happened. I'm excited for this kid. Every time he comes up to the NHL he plays well and puts up some points. Then he gets a freak injury and ends up back in the AHL. I hope he gets to finish the season in Ottawa.

Mark Stone is not an island, and most of his good play was enabled by his superb linemates. These guys have been terrific all season, and it's been great to see the intensity they've brought to recent games despite the hopelessness of the team's plight.

38 saves on 40 shots on the second night of a back to back. Thank goodness, "the" Lehner appears to be back.

23 seconds is all it takes to turn a good game into a bad one.  That's a bit of a fallacy, of course.  The Senators were outshot 30-20 over the final two periods and continue to be crappy at shootouts.  But you still can't help but feel that one of the things that is really killing this team is its myriad brainfarts.

Great, we finally get rid of Ryan Miller and now this guy is in our division? This is going to be a problem, isn't it?

I was only vaguely aware of this guy’s existence heading into tonight, but he sure made his presence known. Could easily have had a hattrick with a bit more luck. 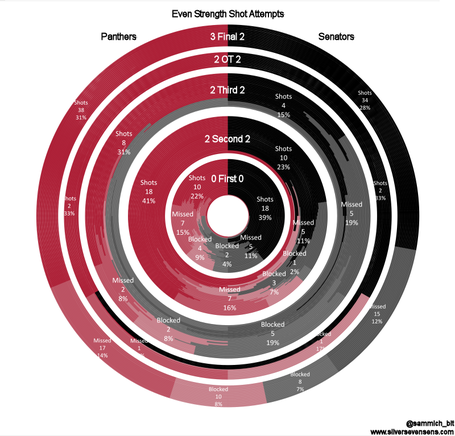 In all of my grumpiness about the Sens dropping out of the playoff hunt, I may have lost sight of how many of these players are a joy to watch.  Erik Karlsson in particular is worth the price of admission (and I don't just mean the $4 that would cost you in Florida), but guys like Turris, MacArthur, Spezza, Hemsky, and Ryan are all pretty special.  Maybe I do still love this team after all.