Please join the Silver Seven Staff and welcome Matt as a writer!

For someone who has been a staunch, stubborn Sens fan since Laurie Boschman scored the team's first ever penalty shot on Feburary 1, 1993, this season has been a sad one to be saddled with.

For the Senators, finding a win in the month of March has been like trying to find a reason as to why Indiana Jones and the Kingdom of the Crystal Skull was ever made.

Finally, though, after many wincing nights of lip-biting, ref-cursing and general-heavens-fist-shaking, the Ottawa Senators pulled out a golden horseshoe of a 4-3 shootout road victory over the Tampa Bay Lightning. The win moved Ottawa's playoff chances from a 0.2% to an overwhelming 0.7% in one fell swoop.

After a solid first period of fast-paced forechecking, hard skating and a 14-7 shot lead, some puck luck seemed to be finally moving in favour of the of the RABHA (Red And Black Heart Attack).  After decently fighting off a 'par-for-the-course' early Chris Neil penalty in the first, King Karlsson netted one on a 3-on-2 at 03:57 from his favourite 'recent' setup man Colin Greening. Big Ben Bishop had no chance and looked behind him (possibly even thinking 'I miss that Karlsson guy - he made cowboy boots look good'). Looking loose and energized, the Sens were finally getting pucks to bounce on to their sticks and they looked like they were energized for a victory.

But the paradise of an early lead was soon lost, as just over a minute later, Nikita Kucherov scored on an odd man rush, and a cruising Zibanejad thought to himself "what - me back check?" Unable to convert on a Stamkos penalty, Ottawa looked fluid with their puck movement and Mike 'Silky Mitts' Hoffman nearly put a one-timer past Bishop, but buried the puck deep into the gigantic, 6'7 mass of the netminder (and to be fair, Bishop is 6'10 with pads on - just ask Shawn McKenzie). Both teams hit the locker rooms knotted up at 1-1.

Despite some riveting commentary from the PBJ (Potvin-Brown-Jam), including a reference to Radko Gudas being a Teen Wolf Four star (do P or B even WATCH movies??!) , Erik Condra once again showed us that he is the unluckiest player in the NHL. Up-Up-Down-Down Condra (there's a longer, nerdier nickname, but I'll spare you) missed the net on a rush, and missed a second time, after the puck squirted out to his cursed stick from behind the boards. Poor Condra. The guy can't even score a goal with his head (and we all know he tried that last game, but unsuccessfully). Finally, some luck went the way of the RABHA in frame two, as the Spezz-Dispenser scored on a nice waiting-game goal at 08:56 and Turris put a reacher past Bishop at 08:12 on a beautiful, behind the net feed from Mark "I'll make you forget all about Bobby Ryan" Stone. 3-1 Sens.

Unfortunately, we all know that a 3-1 lead is far too great a burden for the young Sens, and so the ref decided to call a tripping penalty on Michalek at 11:58 (in all fairness, he had a great view of the play from the polar opposite end of the ice). Viktor Hedman put a slapper over Lehner's glove from the point, and pulled the Lightning to within one. 3-2 Sens. After another questionable call (roughing on Methot) at 14:16, the Sens went to the PK again and somehow managed to keep the Bolts at bay. At the end of two, the score was still 3-2 Sens.

After a deflated beginning to the third, Jared 'hip-hugger' Cowen was forced to make a quick play and tripped T.J. Brown (this was the only legitimate call on the Sens all game). Unfortunately, the Lightning have a player named Steven Stamkos, and he's really good. He Babe Ruth-ed a puck out of mid air and hit a line drive into the back of the net at 05:33 behind Lehner (who looked like he was playing 500 up with his glove). 3-3 tie game.

But miraculously, the Sens were able to squeeze out the OT-force-play, as Spezza's borderline 'holding the stick' penalty was fought off. With 3.7 seconds left in regulation, however, hockey fans across the nation's capital simultaneously spewed profanity as King Karlsson was boxed up for a tripping call (who knew that a totally legal hip-check is the same thing as a trip? You learn something new every day). No goals were scored though, and The Lehner was doing his best to keep the lid on, as he had faced 33 shots by the end of three.

Not much happened in OT, except for the fact that Gryba, Smith and Cowen somehow fought off a 4-on-3 PP (with a little help from a Condra-change) and the Sens played a little Skee-ball in their own end.

Finally, and with much emphatic relief, Sens and Sens fans were able to breathe a sigh of point-attainment. The Lehner (who took a moment of meditation before the shootout) stopped all three shooters and Spezza was able to head-fake the pants off Bishop, and go high-glove-side for the lone goal of the extra frame. I think it's safe to say that Ottawa fans everywhere were happy for Robin, as he showed a poise and a presence in this game that we had long forgotten about.

The rising RABHA will be in Sunrise tomorrow to take on the lowly Panthers at 7:30 EST in search of some more self-respect road points. 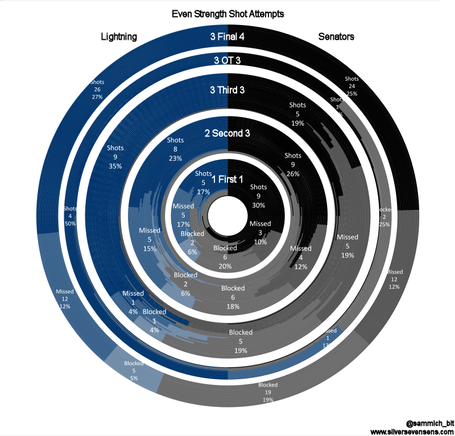