A rundown of the women's club hockey championship

The sixth annual Clarkson Cup was contested this week in Markham, Ontario. The six round robin games were played Wednesday-Friday and the tournament was completed yesterday with the final between Toronto and Boston.

The morning games were well attended; a lot of local school groups came out and filled the rink, which got especially loud during Toronto games. Wednesday and Thursday nights there were a lot of empty seats; Friday night's crowd was somewhat bigger, about 500 people. I watched the final when it was shown on TSN2 on delay at 12:30 am this morning and the Centennial Centre was mostly full, with many standing around the rink and the windows of the second-level lounge were also packed. 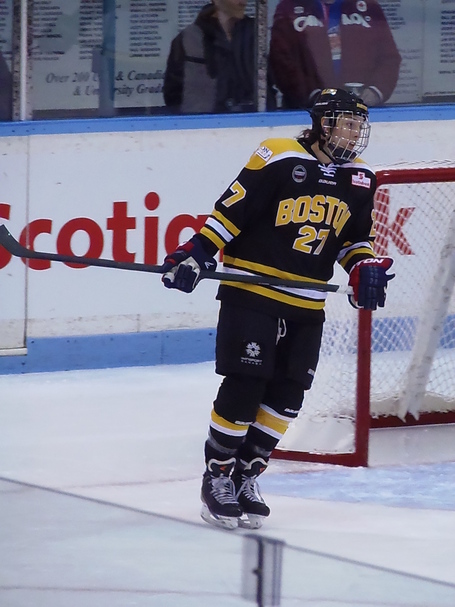 It was a tight, low-scoring game, but I would give Montreal the edge in terms of possession and play. Montreal was the better team in the first, Boston in the second, and Montreal in the third, especially after the Stars fell behind. I thought Vaillancourt was the best player on the ice for Montreal. Much of Montreal's offensive pressure was generated by Vaillancourt and she was particularly strong rushing through the neutral zone. I was also impressed with Julie Chu who was strong quarterbacking the offense from the blueline and was up to the task when bumped up to forward late in the game. Stack and Knight were the most dangerous players on the ice for Boston and had several chances. The power in the arena went out at the start of the third period but the game was only delayed briefly. Midway through the third period, Boston forward Kate Buesser scored the game's only goal on a rebound. Both goalies had strong games: Brittany Ott stopped all 32 shots she faced and Catherine Herron surrendered just one goal to the Blades while stopping 28 shots. 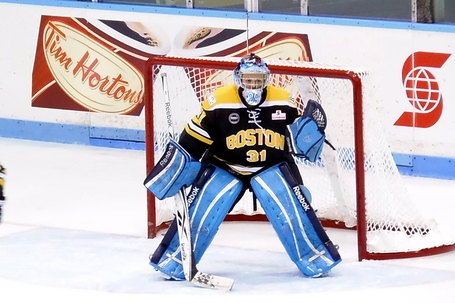 The most interesting thing for me was watching Team USA stars (Chu, Stack, and Knight) out of the context of the Canada-USA rivalry. It's hard for me to appreciate how talented these women are when they wear the red, white, and blue, but in different uniforms, they were a pleasure to watch. I was impressed by all three during the tournament, but with Knight most of all. She is a big, powerful, skilled forward who can take a game over all by herself.

This was an absolutely fantastic game. Because of the results in the first two days, the winner of this game would earn the right to face Boston in Saturday's final. Despite the importance of the game, it was a wide-open affair from start to finish. It was a day game, so there were lots of school groups and lots of Leafs fans cheering for Toronto, and the atmosphere was pretty good.

Again, I thought Montreal was the better team. Again, Montreal came out on the wrong end of things, which I'm sure was particularly disappointing as the Stars finished in first place during the regular season. Montreal's scoring just dried up during the tournament when it mattered most. 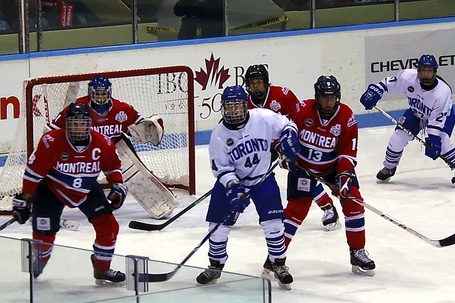 Montreal was undone by its lack of discipline. Twice the Stars found themselves killing a 5-on-3 advantage for Toronto for two full minutes. The Stars also spent another minute down two women. If that wasn't bad enough, late in overtime Montreal took a penalty and spent the last minutes of overtime killing a 4-on-3. Perhaps more surprising than Montreal's lack of discipline, was the fact that they did not surrender a goal on any of those advantages. While Toronto had a few chances on those power plays, its special teams didn't look particularly threatening during the game (the Furies went 0-13 on the PP during the round robin and didn't covert in the final either).

Toronto broke the deadlock at the start of the second period on a goal by Jenelle Kohanchuk. Just like Wednesday night, Montreal struggled to score despite its superior possession. The Stars tied things up early in the third period when Emmanuelle Blais scored. Regulation ended with the teams tied at one and the ten-minute overtime period solved nothing.

The game went to a shootout and only one goal was scored, but it was a great goal. Natalie Spooner, the best Toronto player all game, skated in on Montreal goalie Herron with speed. Spooner went forehand-backhand quickly, before sliding the puck five-hole.

After blowing power play opportunity after power play opportunity, Toronto didn't really deserve to win. But Montreal relied heavily on its top two lines (in particular Ouellette, Captain Cathy Chartrand, Chu, and Vaillancourt) in all situations during regulation and almost exclusively in overtime and they looked beat by the end of the game. Both goalies were impressive. Toronto's Christina Kessler made 34 saves and was perfect in the shootout and Herron made 31 saves and was great on the penalty kill.

The player I was most looking forward to watching was Natalie Spooner and she didn't disappoint. I was fortunate enough to attend one of the pre-Olympic exhibitions games between Canada and the USA and Spooner impressed me with her play for national team, recording Canada's only goal in a 3-1 loss. A true power forward, Spooner has the size, speed, skill to rush through the middle of the ice and drive the net. She also possesses one of the better wrist shots in the women's game. In many ways, she's a lot like Boston's Knight and Toronto's win set-up a showdown between the two. 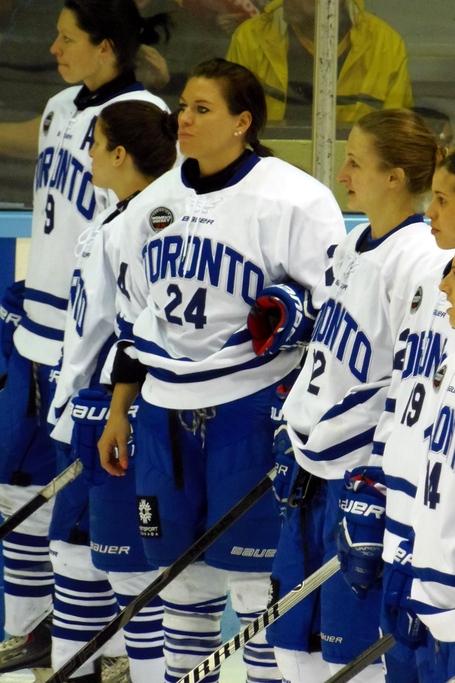 This game was over after the first few minutes and was the only game in the tournament decided by more than one goal. Calgary had a tough tournament, losing all three games but the loss to Boston was definitely a drubbing.

Boston scored two goals in the first four minutes from Stack and Knight. Calgary was able to draw within one midway through the first when Taryn Peacock notched her first of the tournament. It didn't last long, as Kate Buesser, line mate of Stack and Knight, scored to put Boston back up by two. 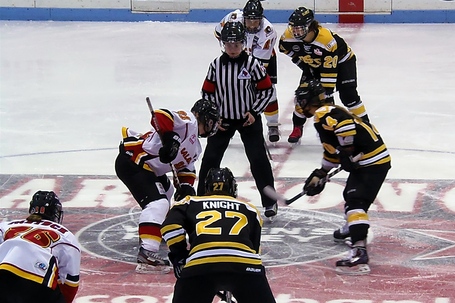 While both Buesser and Stack had a goal and three assists, the story of this game was Knight who scored four goals, including a couple of nice ones.

This game was essentially over by the start of the second period and became a chippy, physical affair. The officials let a lot of stuff go, which might not be the best strategy in a blowout. I felt bad for Calgary backup Kathy Desjardins, who made her only start of the tournament against the Blades, and was given little support from her teammates. She made just 15 saves, but only the third goal should have been stopped, the rest she had no chance on.

This was another great game. The first two periods were fairly even, but Boston had the better pressure and chances thanks to the Stack-Knight- Buesser line. Defender Blake Bolden, who had a good tournament, was fantastic during the final. She had several end-to-end rushes and a few good scoring chances.

Boston really turned it on during the first half of the third period and had half-a-dozen excellent opportunities to take the lead. Spooner was neutralized through most of the first two periods, forced into a checking role by the Stack line. Midway through the third, Boston sent Toronto the power play twice and Spooner turned on the pressure, setting up her teammates twice, but the Furies were unable to score. On the penalty kill, Knight stole the puck at the Boston blueline and broke out on a breakaway. However, Toronto netminder Kessler got just enough of Knight's rising wrister to keep the game tied.

The third period ended with Toronto on the power play, but the Furies were unable to convert. The first Clarkson Cup final to go overtime, Toronto had a 4-on-3 advantage for the first 14 seconds of OT. Not enough time for a real chance, the player advantage allowed Spooner to charge into the Boston zone. With the Furies working the puck behind the Boston goal, Spooner set up shop in front of the opposition goal. The puck went back to the slot and Toronto captain Britni Smith snapped a shot at the goal. Boston goalie Ott only managed to get a piece of the puck and it popped up in the air and fell behind the goalie in the blue paint. Both Spooner and a Blades defender tried to make contact with the puck, but it trickled over the goal line before anyone touched it. 33 seconds into overtime, a classic cup final was over.

Kudos: Rocket Sport Dryer's, a Canadian company specializing in sports equipment dryers for home use, sponsorship of the tournament included providing championship rings to the winning team. Which is pretty cool.

Natalie Spooner: recorded two goals and three assists in four games. Both her goals were game-winning goals. She scored the shootout-winner to send her team to the final and assisted on the Cup-winning goal. Also an absolutely dominant force.

Tessa Bonhomme: Dropped from the national team before the Olympics, Bonhomme rebounded nicely during the tournament. A steady veteran defender, she made a few big defensive plays, including a shot block late in the third period of the final, while leading all-defenders in scoring with three assists.

Blake Bolden: Bolden was held to a single point, but had a good week and had her best game of the tournament in the final.

Julie Chu: Chu had just one assist in the tournament, but was one of the better players on the ice for Montreal during the tournament

Christina Kessler: Herron and Ott certainly had their moments, but Kessler stole the Montreal game (essentially a semi-final, given its significance) and the final for the Furies.