Senators outshined in 3 - 1 loss to the Dallas Stars

Share All sharing options for: Senators outshined in 3 - 1 loss to the Dallas Stars

The Ottawa Senators entered this game with playoff odds of 0.8%, well into #PlayForPride territory. The Stars, on the other hand, entered just shy of a playoff spot - 4 points back of the Phoenix Coyotes, who occupied the last spot in the West with 79 points.

The Sens started this game quickly, with a quick transition play and a carry-in by Colin Greening resulting in the puck ending up on the stick of Erik Karlsson for a split-second, as #65 fired home his 19th of the year just 3:27 into the 1st. The goal tied Erik's career high (set in 2011/12) and the Senators single season record. With 12 games left, Karlsson looks like a good bet to break that record.

As pointed out by our own Adnan on twitter [1, 2], Karlsson has had a pretty similar season to his Norris-winning year, which is a fantastic sign as there were questions on whether he'd recover from his gruesome Achilles injury.

(stats via Behind the Net)

To break this down a little bit, when Karlsson is on the ice, 54.8% of shot attempts (on net, missed, and blocked) are going Ottawa's way this season, and Erik is putting up similar point totals while facing ~ the same level of competition and starting ~ the same # of shifts in the offensive zone. The biggest change between this year and two years ago? His teammates. As Adnan pointed out, his on-ice (including his teammates) shooting % has dropped 0.87%, whereas his opponents are scoring more while he's on the ice, due to a drop in the goaltenders save percentage when Karlsson is on the ice. As shown in this great breakdown, a defenseman's on-ice save percentage tends to be random, so I don't think we can attribute this drop in +/- to Karlsson.

Anyways, the rest of the first period went by and the Sens entered the intermission with a  1 goal lead, despite being outshot 16 - 8 (read: not good). The second started off in a similar way to how the first ended, with the Stars coming out strong and drawing 3 straight penalties (Ceci, Turris, Ryan), which definitely put a bump in Ottawa trying to establish any offense in the early part of the period. Kyle Turris, who was targeted a lot by the Stars today, took a big hit from Jordie Benn and was down for a bit while teammate-and-recently-injured Clarke MacArthur came to his defense - leading to coincidental minors. While 4-on-4, Valeri Nichushkin drove the net while Cowen pulled the Chris Phillips point TM‑ and looked rather useless on a goal-mouth play that Cody Eakin finished off.

Although I first thought that Lehner was a victim to the referees not blowing the whistle while he seemingly covered the puck, @BonksMullet tweeted out a picture that showed otherwise.

Lehner's having a hell of a time tracking (actual) loose pucks. pic.twitter.com/n3tjG8w0Um Here's where things started to take a turn for the worse. The Stars scored two goals in a span of around ~ 2 mins, with Trevor Daley getting the first as another period of 4-on-4 play expiring, and Jamie Benn finishing off a beautiful play from Tyler Seguin to make it 3-1. The Seguin goal really showed how speed kills, especially through the neutral zone, as he received the puck at his blueline, evaded Bobby Ryan, and turned on the Jets to blow past MacArthur and feed it to Benn, who snapped it home before Lehner could move over laterally.

Afterwards, the Sens looked visibly deflated, as the Stars D got the puck and transitioned out of their zone quickly - not giving the Sens a chance to set up. With ~ 5 minutes remaining in the period, the Sens had a PP but weren't generating any offensive zone time. A Stars shorthanded chance led to Bobby Ryan speeding back to present a goal against, but he ended up taking a penalty and slid into the boards hard.

He was writhing in pain for a while, and looked to hurt his right hip - he did not return to the game. The Sens pulled Lehner with about a minute left and had a quick flurry on goal, but Lehtonen shut the door and the game ended, 3-1. The Stars put 44 shots on Robin Lehner, who had a nice rebound game. There were a couple iffy plays, but I wouldn't fault him on any of the goals against.

We had heard some rumblings before the game about Patrick Wiercicoh potentially getting inserted after an "injury" in practice, and it was alluded to that Chris Phillips was the one injured here in this tweet by Wayne Scanlan:

Phillips and Wiercioch both on ice for warmup. #sens

After looking at the TOI totals for the game, I'd bet that Scanlan was correct, with Phillips only getting 10:50 of TOI at EV (usually around 12-14), but we'll wait and see, as his partner Ceci also only received 10:30 - lowest of the defense. Of note, Hoffman and Zibanejad were used sparingly (some of that may be due to the penalties).

Also of note possession wise, Jared Cowen was crushed (+8/-23), along with Bobby Ryan as the low among forwards (+6/-19). Some of this could be due to the fact that both the MacArthur - Turris - Ryan line, and the Cowen - Gryba pairing were matched up against the top line + pairing of the Stars: Nichushkin - Seguin - Benn / Benn - Dillon.

This brings us back to the point that Ottawa's lack of good defensemen, outside of Methot - Karlsson, really puts them at a disadvantage when matching up with other teams, as it's either Chris Phillips or Jared Cowen getting the other "good" line of the opposing team.

I'll end this recap with the following theory:

Why not convert Jared Cowen to forward? He's had a couple instances this season, and in tonight's game, where he looked strong down low and used his size to his advantage. Although he's a clumsy skater, he's less likely to get taken advantaged of as a winger, where he can be aggressive against opposing forwards and still know that there are defenseman back to cover for him. I'd bet that Murray and co. are going to give him the summer to figure it out, but I think they should really consider it if things don't go as planned next season. It's been worrying to see so little development despite constant playing time this season.

Also, thanks to B_T for his great donut! 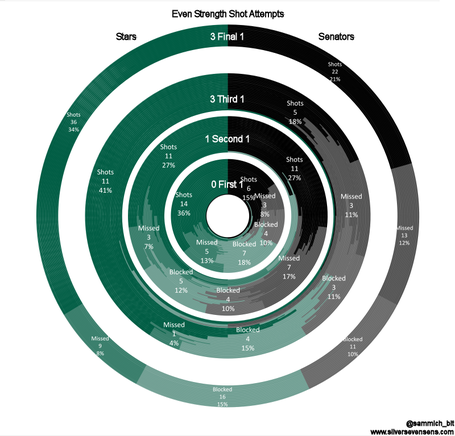