Share All sharing options for: Winter of Discontent Continues: Senators Fall 5-4 to Lightning

The season of new beginnings. Except in Ottawa, where a long, cold, losing winter stubbornly clings to the team.

The Sens were behind almost immediately, when Tampa forward Teddy Purcell scored 23 seconds into the game on a broken play, a few lucky bounces, and a wayward Bobby Ryan stick. After talking about a rebound effort, it was not the start struggling netminder Robin Lehner wanted. Midway through the period, with Milan Michalek in the box, Clarke MacArthur stole a puck in the neutral zone and went into the Tampa zone all alone, snapping a shorthanded marker passed Ben Bishop, to tie the game up. However, on the same PP, Tampa retook the lead on Purcell's second of the game. One of Erik Karlsson's shortcomings is tying up the opposition in front of the net on the PK. He was left to cover two Lightning players, as Chris Phillips was caught out of position. Karlsson couldn't prevent Purcell from getting the puck by Lehner on another poor rebound effort from the Sens goalie. Thankfully, Ottawa struck back immediately, when Karlsson netted his 18th of the year on an absolute blast from the point that Bishop wasn't prepared for. It was a bit of a choppy period, with the Sens taking four minor penalties to the Bolts three. The period finished tied at two; shots 11-10 in favour of Tampa.

The second period started 4-on-4 with MacArthur and the recently acquired Ryan Callahan in the box. A Bobby Ryan interference penalty once again put Ottawa down a man, and Tampa capitalized. Sens defenseman Jared Cowen was beat by Lightning centre Valtteri Filppula at the blueline and was slow getting back into position. Consequently, he wasn't able to get to the rebound or cover Filppula and the Bolt recorded his 23rd of the season. Chances for Ales Hemsky and Mika Zibanejad were denied. Late in the period Eric Gryba rang a slapshot off the post. After trying to generate some offense on his last few shifts, Hemsky scored the highlight of the night and possibly Ottawa's season, when he skated around first Radko Gudas, then Matt Carle, and finally Bishop, calmly sliding the puck into the waiting mesh. It was an absolutely beautiful goal and had Sens fans chanting his name. The period ended tied at three; shots 21-20 in favour of Tampa.

The third period started with Ottawa on the power play for about a minute. Perhaps the best chance on the man-advantage came on an Ondrej Palat-Victor Hedman 2-on-1, but Lehner twice denied the Tampa winger. Tampa killed the penalty and took the lead again shortly after, when veteran defenseman Eric Brewer picked up his first of the year. Brewer, the late man on the play, took the pass from J.T. Brown and then Brewer put the puck top shelf, short-side on Lehner, with a nice backhand. Midway through the period, Zack Smith took an ill-advised retaliatory penalty, and once again, the Senators were left to kill a Tampa advantage. Predictably, Tampa scored, to increase the lead to two. Fittingly, it was the victim of Smith's retaliation, Callahan, who scored with a slapshot that beat the partially-screened Lehner glove-side. It was a goal that Lehner would have stopped if he had been at the top of the paint, challenging the shooter, but his goal line position is a stance adopted by a lot of goalies lacking confidence. Ottawa's offensive pressured increased in the second half of the period as they try to get back into the game. With about three minutes left in the game, Paul MacLean once again pulled Robin Lehner to get the extra attacker on the ice. It worked early, when Milan Michalek tipped an Erik Karlsson rocket from the point to get the Sens within one. With 2:52 left in the period, Ottawa had a chance to draw level. The chance increased when Callahan took a slashing penalty with a minute left. Despite a flurry of chances, Ottawa couldn't manage another goal with the netminder pulled. Tampa wins 5-4; 31-28 in favour of Ottawa.

Again, look at it.

The CTC faithful were chanting his name, if that's not hero status, I don't know what is.

I thought Cowen was ok tonight for the most part; he had some nice hits and seemed to be playing a simplified game. Except he was absolutely awful on the Filppula goal. Filppula has the skill to embarrass the odd defender. But it's not so much that Cowen got beat at the blueline. It's that in addition to that miscue, he didn't get back and cover his man and it resulted in a goal that gave Tampa the lead and put Ottawa behind for the third time in the game.

Unfortunately, Phillips's play tonight was consistent with his other efforts post-extension.

He took a stupid retaliatory penalty at a critical moment in the third period. His team was still in the game down by one, but Smith's selfish play put Tampa's power play (which had already scored once in the game) back on the ice. Tampa capitalized with Callahan's goal, the eventual game-winner.

It wasn't as bad as some of his recent performances, but Lehner was again at fault for multiple opposition goals. The Tampa goals highlighted the same problems that have plagued Lehner in 2014: early goals, rebound goals, unable to find the puck goals, blocker side goals. An .821% is simply not good enough.

Again, a familiar issue for this team. Ottawa took seven minor penalties; many were of the unnecessary variety. A few illustrated a complete lack of discipline and composure. Twice it burned the team

Purcell scored two early goals and twice staked Tampa to a lead. His first goal, scored in the first minute of the game, was a blow to the Sens, who were desperate to avoid another bad start.

Hedman set up both of Purcell's goals and was solid defensively. He play a lot on the powerplay, he played a lot on the penalty kill. He was second only to Erik Karlsson in ice time with 23:52. He led Tampa's rush and he stifled Ottawa's breakouts. It was just a good game all around for the defender. 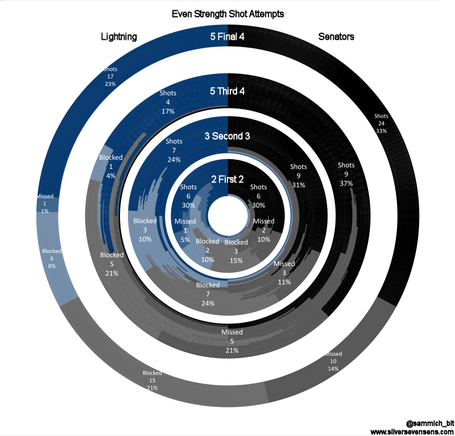