Big win leading up to the deadline

It was a great day for a stadium game in Montreal.  Clear, if maybe a little chilly... wait, what?  Vancouver?  With the length of the opening I just assumed... okay, Vancouver.  Then not so much a great day.  Chance of rain, so close the dome.

The game started even enough.  Decent amount of back and forth, some chances at both ends.  Then Colin Greening took an ill-advised high sticking penalty.  The Ottawa penalty kill was doing reasonably well, Vancouver was getting chances but no real sustained pressure.  But then...

A bullet from the point, tipped by Kyle Turris on the way in, and no sight line for Craig Anderson.  Vancouver gets on the board.

The next stretch of play certainly felt like it was almost all in the Ottawa end, but it wasn't nearly as bad as it appeared.  Part of the impression would come in the form of another high sticking call, this time against Chris Neil.  The Sens would do a solid job of killing it off, but Vancouver kept up the pressure at 5 on 5.  Then an unfortunate sequence of events.

Tldr; no call, horrible giveaway, horrible goaltending makes it 2-0 Vancouver.  Cue the down 2-0 jokes on twitter, this time with "Heritage" and "Classic" references mashed in.

But here comes Clarke MacArthur!  Condra would fire a shot from the blue line, MacArthur would deflect it, and Bieksa would have it deflect off his hand and past Eddie Lack.  Ottawa breaks the goose egg.

Ryan Stanton would go to the box for tripping Chris Neil, and Ottawa was off to their first power play of the game.  The power play hasn't been great for the Senators lately.  Glenn Healey was "nice" enough to provide the numbers - 1 goal in their last 19 power plays.  This one started about as well as you'd expect after hearing that stat - with Ryan Kessler breaking down the ice within the first 20 seconds and feeding the puck back to a rushing Chris Higgins, but Anderson made the save.  Back down the ice, with Ottawa actually setting up some zone possession.  After some chances - Spezza hit a post, Hoffman just fanning on a beautiful setup - Karlsson decided to do it himself.  With some traffic in front of Lack, he skated along the blue line and fired a shot in to the far side of the net to tie the game up.

The period would end in a 2-2 tie, and the overall #fancystats in close to a tie as well.  But Ottawa carried the 5 on 5 play, and had the momentum going in to the second.

The start of the second period was mostly back and forth play without a whole lot of stoppages.  A monstrous hit by Methot would send Daniel Sedin to the dressing room, with help.  It was a clean hit, but the shot of Sedin going to the dressing room did not look good for him.  He would not return to the game.  Meanwhile, at the other end of the ice, Condra would get a good scoring chance but couldn't beat Lack, MacArthur would get the rebound with a wide open net but couldn't get it past Bieksa.  Finally Vancouver would get control and the whistle goes due to the injury to Sedin.

The back and forth play was broken up momentarily by a pair of penalties - Gryba would go for hooking, and Jannik Hansen for diving.

Right around the half way mark, Cody Ceci broke the second period stalemate by joining the rush to take a feed from Jason Spezza and beat Lack clean.

The rest of the period played out with much of the same back and forth play, with a brief interlude for an unsuccesful Ottawa power play that really didn't look much different from the 5 on 5 play in the second.  Cody Ceci beat Lack clean again, but put the puck of both posts and back out.  It was off to the dressing room after a period where both teams had their chances, but with more of them going to Ottawa.

The tone was set right away in the third period.  Zack Kassian would tangle up with Milan Michalek off the face-off.  He'd win that physical battle, but he failed to see Methot coming in like a freight train.  End result: one flat Kassian.  Would take long for that to move down the ice, with a scrum breaking out right beside the Vancouver net.  After that Tom Sestito would try to get Chris Neil to dance.  After being rejected, Sestito made a bee line for Erik Gryba along the boards behind the Ottawa net.  Gryba saw him coming at the last second and managed to get out of the way.

All of that physical stuff and it was chirping that would lead to a pair of penalties, with Neil and Sestito both taking unsportsmanlike conduct against each other.  Sestito would spend the entire time in the penalty box trying to goad Neil into going once they got back on from what I could tell, but Neil didn't take the bait.

The rough stuff would continue with a scrum around the Ottawa net this time.  Alexandre Burrows and Chris Phillips would both head to the box for roughing against each other.  Vancouver would continue to crash the net, trying to knock the puck in or at least knock Andy off his game.  Neither worked.

Vancouver got a shot to tie the game up with Gryba going to the box for... you might have guessed it, high sticking.  It wasn't much of a shot though.  They would spend most of their power play with possession, but barely able to carry it out of their own end.  When the Canucks did get the puck across the Ottawa blue line, it quickly found it's way back to the other end.  Brad Richardson would cut the power play short by tripping Phillips.  Vancouver didn't have a single shot attempt in 1:36 of the man advantage.  Not that Ottawa did much better on their power play - well, not any better in fact.  No shot attempts for the Sens either.

With 2:01 remaining, Vancouver would win the faceoff in their own end and take the puck down the ice.  As soon as zone possession was set up, Lack made for the bench.  Zack Smith fed the breakout pass to Chris Neil for a two on one with Colin Greening, who would put the game away with the empty net goal.  Your Ottawa Senators would take the Heritage Classic with a final score of 4-2.

The kid came to play today.  He was buzzing all game, and got the game winner to show for it.

Apart from Karlsson's big giveaway on the second Canucks goal, they all played a solid game.  Even without that they weren't perfect and made some small mistakes, but a far cry of what we saw in the last two games.

Watch where you swing those things, guys.

This pair, especially Tanev, were by far the most effective at keeping the puck in the Ottawa zone.

What happened, posts?  You were our heroes during the Olympics! 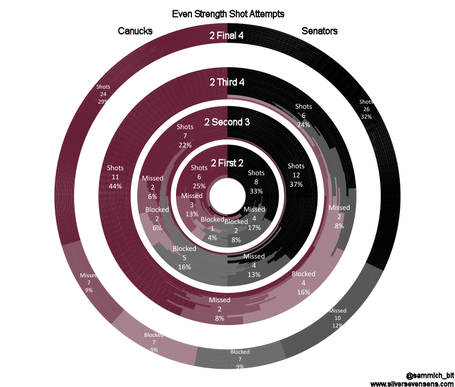