Ottawa's nature as a high-event team has been talked about of late, and it was on display in abundance against the New York Rangers--but Ottawa's goaltenders couldn't match those of the Rangers, and Ottawa fell by an 8-4 score.

Share All sharing options for: Lundqvist (barely) outduels Lehner and the Senators lose 8-4

It's hard to know where to start with this one, so I'll just go with the basics: The Ottawa Senators lost 8-4 to the New York Rangers on Tuesday night. Things started well, but then they took a turn for the worse, and once the did everything snowballed--as has been a common thread for this season's Senators. Although the Sens kept pace with the Rangers, goaltending was the difference, and Ottawa couldn't take advantage of the rare occurrence where Henrik Lundqvist allows four goals against. The odds have been against Ottawa making the playoffs since November, but they're infinitesimal now. For the third time in six seasons, the Senators will not make the playoffs this year.

The game started about as well as the Senators could ask, with a couple of great scoring chances within the first 90 seconds--of course, both Zack Smith and Bobby Ryan (the scoring-chance-takers) missed the net, so you wondered if this game might end up like Sunday's one against the Avalanche. Mike Hoffman let fans breathe a sigh of (temporary) relief a few minutes later, though, when he fired an absolute laser-beam of a shot from the blue line.

But shortly after that goal, Hoffman struggled to keep the puck in at the blue line on Ottawa's first powerplay of the game, giving Rick Nash a 100-foot breakaway against Robin Lehner and made no mistake to tie the game--at least temporarily. Ottawa restored their lead with a powerplay goal on their next opportunity when Mika Zibanejad cashed in on a gorgeous Jason Spezza pass from the corner. After 20 minutes, the Sens were up by one.

Then things fell apart in the second period. Both teams each fired a lot of shots, but the Rangers got theirs past Ottawa's goalie while the Sens couldn't counter. Four unanswered goals, each more confidence-sapping than the last, put the Rangers up 5-2 after two periods.

With Robin Lehner getting lit up yet again, Nathan Lawson was in the net to start the final period--but he didn't last the whole thing, as he was injured after allowing two goals (neither of which he had much of a chance on) on ten shots. The Sens also scored a couple goals of their own in the period to make it somewhat respectable, but Nash's second of the game into an empty net finalized an 8-4 score.

Sens Zero: Robin Lehner
Sure, there was some bad luck and there were some bad bounces, but Lehner's struggles continued. He didn't have his angles, didn't move laterally very well, and still had an exceptionally hard time with rebound-control. He was pulled after the second period, at which point he'd allowed five goals on 26 shots against--good for a .807 save percentage.

But you know what? Robin Lehner is better than this--we know that. We've seen it in the past, and the recent struggles of his are just growing pains. They're exceptionally costly growing pains that put the final nail in the coffin of Ottawa's playoff hopes this season, but Lehner will improve in time. The question, though, is whether he'll be a good goalie or if he can become a great one.

Sens Hero: Jason Spezza
Although he only had one assist tonight, Spezza's solid play continued in this game. To my eye, he looked great in both the offensive and defensive zones, which was great to see. If Spezza can continue solid defensive positioning without sacrificing his offence, it'll be great for the Sens.

Sens Hero: Mike Hoffman
Although Hoffman had some bad luck in a tough position on the first Rangers goal, he had a great game overall. Plenty of jump in his game, and his shot is something to behold--on top of his beautiful goal, he had another rocket that just hit the crossbar. The jury's still out on what player Hoffman will become in this league, but he's really looking good these days.

Honourable Mention: Jared Cowen
I've seen some solid improvement from Cowen since his post-Olympic-break scratchings, and it's surprising that he and Erik Gryba have combined to form a pretty good defensive pairing--and Cowen's the one driving that strong play. He's pinching wisely, generating shots on goal, defending ably, and making simple plays instead of trying lowe-percentage ones. His highlight of the night, to me, was a terrifically effective one-on-one in the second period where he swatted the puck of the oncoming skater's stick and then dropped his should right into the guy; it was a thing of beauty. More of that would be great.

Fun fact: Cowen led Senators defencemen in corsi tonight with a +10 score; that was tied with Hoffman for tops on the team overall, too. By comparison, Erik Karlsson was even.

Sens Zero: Chris Phillips and Cody Ceci
Thank goodness Cowen and Gryba are playing well together, because Phillips and Ceci most certainly aren't. Phillips' brutal breakout pass-giveaway to Mats Zuccarello ended whatever momentum the Senators had to start the third, but these two combined had a tough outing. It looks like the blue line just won't settle down for Ottawa; when one pairing looks good, another looks awful. 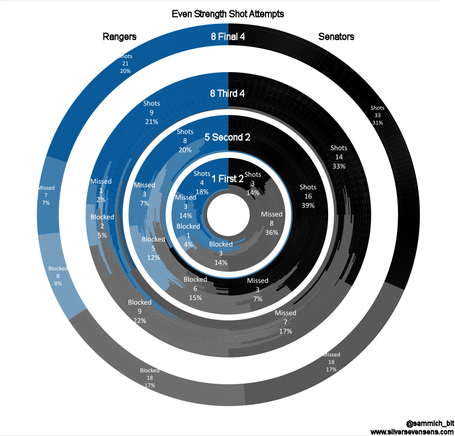