Share All sharing options for: Senators Literally Buried by Avalanche

This is a weird time to be a Senators fan.

The season isn't dead yet; accordingly to sportsclubstats.com Ottawa went into Sunday's game with about a 10% chance of making the playoffs. But it’s hard to be optimistic. Let's be honest: if your doctor gave you a one in ten chance to make it to May, you'd probably be getting your affairs in order and trying to knock a few things off your bucket list (unfortunately, my list just says, "See Sens win Cup", so I'd be in for a sad couple months).

So while the romantics amongst us may still be dreaming of a playoff run, pragmatic fans are in limbo. It's not very fun to cheer the team on right now: the Senators aren’t playing particularly well, and there aren't a bunch of exciting new prospects playing (as there might have been if Ottawa had sold some assets at the trade deadline). Sens fans have also been robbed of the choice to take perverse joy in cheering against the team in order to get a higher draft pick (since, as we’re all very aware, Ottawa's 2014 first round draft pick now belongs to Anaheim).

All of which is to say that it’s harder to get excited for games right now than it has been in some time.

This was reflected in the rather mundane nature of the prevalent pre-game narratives: (1) whether the team bounce back in this game played less than 24 hours after one of the worst collapses in NHL history; and (2) whether things might be a bit awkward with Dean Morton refereeing another Senators game less than 24 hours after everyone got really really mad at him at the end of the last one.

I hate these types of narratives. But it looks like these are the types of things we're going to be talking about until this disappointing season slithers back into the sea.

Let's move on to the game.

The first period wasn't thrilling. When the buzzer sounded to end the period, the only thing I'd written on my notepad was the word, "NOTES". It was underlined.

A quiet first period wasn't actually a bad thing for the Sens. There's always a worry about coming out slow on the second half of a back-to-back, and as I said above, there was particular cause for concern after the deflating manner in which Ottawa had lost the night before. In reality, the Senators were probably the better team in the period, and they might have gone up a goal or two if not for missing wide on a number of decent chances.

The second period played out very much like the first, but with one terrible exception: a disastrous play in which a comedy of errors by the Senators gifted the visiting team a 1-0 lead.

The Senators actually had the lion's share of the scoring chances in the second period, again missing the net on a number of good chances. Cody Ceci in particular had a few good chances and could easily have added a third goal to his season tally.

But calamity struck with just over four minutes left in the period. Chris Phillips, who is quite noticeably not Erik Karlsson, somehow found himself set up in "Gretzky's office" behind the opposition net, facing his own team. Unfortunately, as Denis Potvin astutely observed, "[Phillips] is not Wayne Gretzky".

Phillips did manage to get a wrap-around shot, but the Avalanche quickly recovered the rebound and were able to break up the ice with Phillips trailing behind them. The problem was compounded when Ales Hemsky, who had dropped back to cover for Phillips, pinched in from the opposite(!) point and missed on his check, leading to a three on one for Colorado. Insult was added to injury when former Senator Andre "Player 61" Benoit was the man to fire the puck past Robin Lehner.

The Avs would take that 1-0 lead into the second intermission.

I'm always annoyed when broadcasters put up a team's "record when leading after two periods" at the beginning of the third. It's usually not informative; everyone has a good record in this situation. This game was the exception. The Colorado Avalanche were an extremely impressive 31-0-2 when leading after two. It turns out falling behind to this team is one of the classic blunders (only slightly less known than, "never start a land war in Asia").

Things went as you would expect. The Senators pushed for a tying goal, left some space at the back, and eventually found themselves down 3-0.

To their credit, the team didn't give up, and really poured it on in the last couple minutes. Unfortunately, NOBODY gives up a three goal lead in the last five minutes of a game [dramatic sigh], so while the Senators were able to break Semyon Varlamov's shutout bid with five seconds to go, it was all too little too late. The Avs won 3-1, and Ottawa’s slim hopes for a postseason berth got a whole lot slimmer.

No one really stood out too much for me in this game. Erik Karlsson gets an honourable mention for being the source of everything that is good in Ottawa, creating numerous chances and driving possession as he usually does (his 71% Corsi in a losing effort is impressive). Jason Spezza also continued in the same good form he has shown since the Olympics – working harder than everyone else and trying to will the team to win. If only that was enough to save this team!

Nobody was noticeably awful either. Phillips will wear some of the blame for being behind the opposition net for the all-important first goal, but it wasn’t actually a terrible play, and no one would have said a word about it if Hemsky hadn’t blown his brief stint as acting-Big Rig. In the end, this was really a team failure, and not even an ugly one. 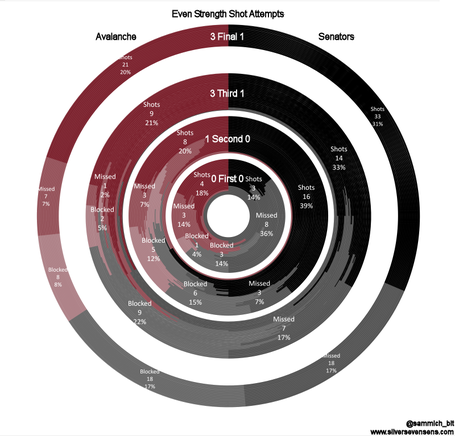 While it's probably too late to talk about "huge games", this was certainly a disappointing one. As has happened more than a few times this season, the Senators were good for about 95% of the game but gave up some goals during a few dizzy spells.  It's too bad, because they're not that far off from being a decent team.