Beware the Ides of March: Sens Stabbed in Final Minutes, Fall 5-4 in OT

There is a tide in the affairs of Sens. Which, taken at the Zamboni flood, leads on to fortune; Omitted, all the voyage of their life Is bound in shallows and in miseries. On such a full sea are we now afloat, And we must take the current when it serves, Or lose our playoff ventures.

Share All sharing options for: Beware the Ides of March: Sens Stabbed in Final Minutes, Fall 5-4 in OT

Friends, Romans, Senators fans, lend me your ears;
I come to bury the Sens, not to praise them;
The evil that teams do lives after them,
The good is oft interred with their bones,
So let it be with the Sens ...

The talk before the game centred on the return of Montreal Canadiens netminder Carey Prince, who hadn't suited up for the Habs since February 8, out injured since winning Olympic gold in Sochi. However, Ottawa number one Craig Anderson wouldn't start, still feeling the effects of Monday night's game. The first period started in the worst possible fashion, with Montreal talking the lead less than a minute into the game. A draw just outside Ottawa's blueline was won by Kyle Turris, but Daniel Briere pounced and beat Bobby Ryan to the puck. Skating to the centre of the ice, Briere rifled the puck passed a criss-cross of bodies high in the slot and past Robin Lehner. It wasn't great from either Senator, and Ottawa was in the hole early. A couple minutes later, Senators captain Jason Spezza drew Ottawa even. An Erik Karlsson drop pass in the Montreal zone deflected off Clarke MacArthur, the intended target and to Spezza, who had just joined the rush. Spezza sent a bullet of a shot passed Price, and the game was tied.

The hectic pace of the period continued after the Spezza goal. A poor interference penalty from Chris Phillips put the Senators down a man and tested the team's shaky penalty-kill. While Lehner was up to the challenge, Montreal dominated and had several good chances. The Sens were lucky to kill it off, but perhaps a bit unlucky when Clarke MacArthur drew a too-many-men penalty. It was the same story: incredible Montreal pressure, key saves from Lehner, and some luck to keep the game tied. In the second half of the period, Ales Hemsky tried to get the Senators going offensively by driving hard to the net with puck. With a tight-checking Alexei Emelin hot on his heels, Hemsky ended up in the net along with Price for Ottawa's third minor of the period. It was a poor call, but officials are constant as the Northern Star, and somehow Ottawa's penalty kill (Lehner) prevailed. The period ended tied at one because of the superb play of Lehner. Shots 17-4 in favour of Montreal.

Ottawa started the second period much better, attacking the Canadiens, generating a few good chances, and drawing the team's first power play of the game. The PP was short-lived, with Spezza taking a goalie interference penalty 17 seconds into the man-advantage. While there was glancing contact, Prince wisely sold the call, negating any Ottawa advantage. 4-on-4 changed nothing and Ottawa once again went to the attack. Midway through the period, Emelin's stick got caught between the legs of Karlsson, tripping up the Ottawa blueliner in the neutral zone, to send the Sens back to the power play. Ottawa was unable to take the lead with the man-advantage and shortly after, Jared Cowen was sent off for a hooking infraction. Unlike the penalty kills in the first period, this Ottawa PK effort was solid. The Sens didn't allow any Canadiens chances and looked much more in control. Late in the period, Colin Greening won the puck in the neutral zone and rushed into the Montreal zone. Hauled down by Lars Eller from behind, Greening and Eller slid into Price and the post, while Chris Neil waved the puck over the goal line. Called a goal on the ice, it was reviewed by the refs and overturned. Ottawa threatened on the PP, but couldn't breakthrough the deadlock. After playing the whole power play on a shift that lasted 2:20, Karlsson made an absolutely beautiful pass from his own goal line to a waiting Zack Smith, stationed at Montreal's blueline. Smith's initial shot was stopped by Price, but the Habs netminder left the rebound uncovered, invitingly in front of the net. Smith deposited it quickly in the open net, and Ottawa had a 2-1 lead late in the period. It was a much better period for the Sens, who outshot the Habs 16-9 in the second.

Ottawa started off the third with an excellent chance for Smith eight seconds into the period. Smith skated in alone on Price, but this time the Montreal netminder got a piece of the Ottawa centre's wrister and deflected it over the net. Ottawa kept the pressure up and added to the lead a couple minutes later on Ales Hemsky's first as a Senator. Trapped along the end boards with P.K. Subban, Spezza snapped a puck back into the slot to Hemsky, whose wrist shot went blocker side. Just over three minutes later, the Sens added another as a result of some strong play from Bobby Ryan. With the Turris line pressing the Habs in the Montreal end, Ryan took a big hit in the corner to keep the play alive and send a pass to Clarke MacArthur. MacArthur's one-timer went top shelf for Ottawa's fourth of the night. What should have been a ho-hum affair for the rest of the period was anything but. Terrible officiating combined with poor defensive play allowed Montreal back into this game. If the Habs first goal was poor from Lehner, goals two and three were much worse. With the Senators down a man in the final minutes, Price was pulled to create a 6-on-4. With chaos and interference in the crease, Montreal scored with less than one second on the clock. With the puck held and out of sight for many steamboats, a delayed whistle led to a Montreal goal in OT. Lather. Rinse. Repeat. Everyone went a little crazy. Lehner looked like he was going to kill someone. Bobby Ryan received a game misconduct. Montreal wins 5-4 in OT. Shots 48-34 in favor of Montreal. Ultimately, "Men at some time are masters of their fates. The fault, dear Brutus, is not in our stars, but in ourselves."

Brutus says he was an honourable man: Zack Smith

Yes, he had some defensive blunders but he also had a key (at the time) goal that put Ottawa ahead late in the second period. He had one of his stronger offensive games efforts in recent memory and generated a few scoring chances. I still have issues with MacLean's deployment of Smith's line, but that's not on Smith. Not that I loved MacLean less, but that I loved the Sens more.

Brutus says he was a dishonourable man: Robin Lehner

Lehner was great in the first period and kept the Sens in the game early, despite the team's penalty trouble and being badly outshot. He was spectacular for 55 minutes. Then things fell apart. He should have stopped the second and third Montreal goals. While he has a legitimate beef about the officiating on Montreal's fourth and fifth goals, he needs to be better in terms of position and hanging on to the puck. I understand his explosion at the end of regulation, but he needs to keep his composure for overtime. I understand his anger in overtime (I wanted a piece of the refs too) but it will do nothing to convince management that he's ready for more starts or the number one role next season.

So ends Roman week, with the fall of the Roman Republic. 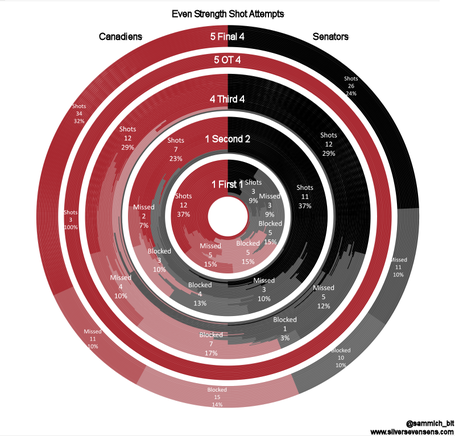